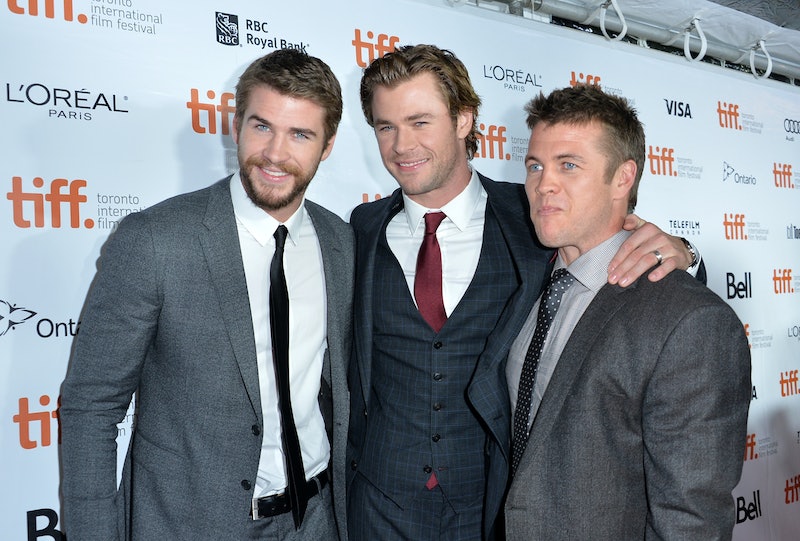 There were many reasons to get excited about Chris Hemsworth hosting Saturday Night Live , and two of those reasons were made obvious during Hemsworth's monologue on Saturday night. During his monologue, Hemsworth invited his two brothers, Liam and Luke Hemsworth, to the SNL stage to enjoy the thrill of hosting Saturday Night Live. The brothers fielded questions from fans, and were even joined by an unexpected fourth brother, Callum Hemsworth, played by Keenan Thompson.

Chris quickly remedied the awkwardness of his monologue by bringing his brothers out. Liam and Luke Hemsworth (Liam from The Hunger Games and Luke from the Australian soap opera Neighbours) came out on stage and gave their bro a big bear hug that made just about every fan dream of being in the middle of the Hemsworth brother sandwich. But Luke and Liam (who made his second monologue appearance this season, the first during Woody Harrelson) weren't the only Brother Hemsworth showing up on Saturday. Callum Hemsworth, the unheard of brother, also came to support Chris, really rounding out the family affair.

If you've never heard of Callum, it's really NBD, because it was just Keenan Thompson in a blonde wig. Don't worry, there's not an unknown Hemsworth brother.

Check out the Hemsworth brothers come together to kick of Chris' hosting on SNL.

More like this
Sara Zwangobani Is A Self-Proclaimed 'LOTR' Super Fan
By Frances Stewart
'The Crown's Matt Smith Reveals Prince Harry's Hilarious Response To The Series
By Bustle UK
The Prince William & Rose Hanbury Rumours, Explained
By Frances Stewart and Sam Ramsden
Devi Is Going To Meet A “Smoldering Bad Boy” In ‘Never Have I Ever’ Season 4
By Jack Irvin and Gabrielle Bondi
Get Even More From Bustle — Sign Up For The Newsletter