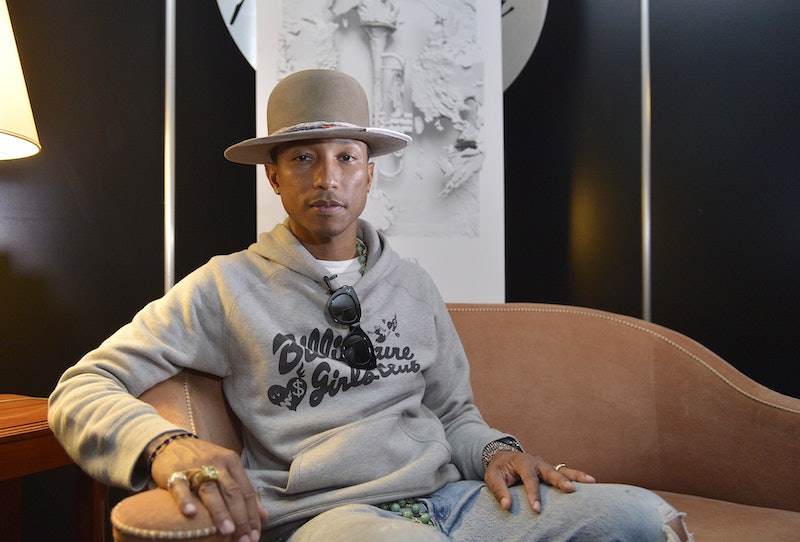 The Voice is back, which means that on Monday and Tuesday, my television is all Pharrell, all the time — no excuses and no interruptions. Seriously, don't call me. Prior to the famed shorts-suit wearing singer joining the cast of coaches, I tuned in mainly to swoon over Adam Levine, sexily perched in his red chair, spitting witty banter at Blake Shelton. But alas, Pharrell's power and charm have made him even more lovable than the Maroon 5 front man and I think the whole of humanity just may agree with me.

The multi-hyphen star seemingly has the world under some sort of hypnosis of kindness these days, every word that comes out of his mouth dripping with genuine love and laced with cool-kid wisdom. So far this season, he has gone up on stage and performed "Happy" with a fan who didn't get any chairs to turn, won over the most compelling artists with his combination of heartfelt appreciation and sincere interest and has schooled us with his off-the-cuff philosophies on music, life and the beauty of uniqueness and being who you really are. Also, it makes my heart warm every time he responds "yes, sir" to the unknown hopeful on the stage, showing how humble and inherently cool he truly is. What I am saying is, Pharrell is the modern day, real life Yoda. When I am a billionaire, I will inquire about hiring him to give me a pep talk every morning, because that's just how every day was meant to start.

In addition to being pop culture's most powerful Jedi Master, Pharrell also has a unique style that never ceases to surprise and delight. Whether wearing short suits and bow ties or the mountain hat that garnered it's own Twitter account, his red carpet attire is always enviable and never boring. When he takes it to the streets, he is the obvious leader of the urban chic pack, with outfits that have induced a cult following. And not tending to be a subscriber to the "less is more" philosophy, his jewelry and accessories collection is museum exhibit worthy. While a majority of the population would have a hard time pulling off his signature look, that doesn't stop both men and women from being sucked in to his sick style game. Let's relive all the the times we fell head over heels in envy with Pharrell's on point fashion.

1. That Time He Had A Rainbow Of Adidas Superstars

Leave it to Pharrell to collaborate with Adidas Originals and design a line of Superstars that includes all the colors of the rainbow. It is only a matter of time before he begins to coordinate each of these with his many hats. The possibilities are endless. Also, those socks.

2. And That Time He Wore Swarovski Encrusted Kicks

They say diamonds are a girl's best friend, but I beg to differ. After seeing (a.k.a being blinded by) Pharrell's blinged out sneakers, men and women everywhere will be ready to cozy up and become BFF's with Swarovski.

3. That Time He Wore His Feminist Heart On His Sleeve On SNL

The ways we love Pharrell are endless, but his penchant for supporting equality and girl power stands atop the list. A well-known feminist backer, he has often been spotted wearing this ever-popular hoodie from his Billionaire Girls Club line, a brand the entrepreneur launched as the female counterpart to his Billionaire Boys Club brand. Clearly, Pharrell is tuned in to who runs the world.

4. And While Sitting Next To Lionel Richie

5. And When Visiting The Berlin Wall During His #DearGirlTour

6. That Time He Had Two Pairs Of The Hottest Chanel Sunglasses

Black or white, white or black? It's a tough choice when deciding between two color ways of Chanel's highly sought after circular shades. Good thing Pharrell is rocking both as of late and is rarely spotted without at least one pair adorning his peepers or hooked to the collar of his shirt.

7. That Time His Arm Party Game Was On Point

8. That Time He Had Major Chain Swag

Which is all the time because he is the king of layering chains — the longer the better. Really though, between his neck and his wrists, the man's body is like a jewelry store. And Pharrell's philosophy when it comes to icing his outfits? More is more. That is an accessorizing style I can get down with.

9. That Time He Wore All The Hats

If there is anything Pharrell loves more than arm candy and chain swag, it's a hat. Actual apparel could almost be non-existent and no one would notice because the platinum producer has also become a master accessorizer. It isn't just about the hat either. Ever since he rolled up in that Vivienne Westwood hat to end all hats, we have taken notice of any variation thereof that has ever adorned his dome. Seriously, the number of oddly shaped lids he looks good in is absurd. Do you think he has a closet just for his hats?

The T-birds had black leather and Danny Zucko and the Billionaire Boys Club has Pharrell and his one-of-a-kind, patch laden varsity jackets that put our old lettermans to shame.

11. That Time He Got Cute In A Cardigan

He is wearing a bona fide grandpa cardigan, people. When I have a cardi party, I teeter somewhere between school teacher and secretary, yet Pharrell makes button up cashmere look like the everyday cool-kid uniform. Perhaps it's the graphic tee underneath or the oversized hat he pairs it with, but he probably just has super swag powers.

12. That Time He Rocked A Jean Short

The "jort" is a tough look for most human men to pull off, but not Pharrell, who wears the too-the-knee denim with a white button up and ties it all together with a black bow tie. If any male or female I know tried to pull this off, they would appear as if they attempted to change out of their formal clothes and into their street clothes after having one too many beverages at a black tie event and then just gave up halfway through. Yet, we see Pharrell and outfit envy strikes again.

13. That Time He Wore A Short Suit

I didn't even know that shorts were allowed to be paired with a suit coat until Pharrell came along and married the two pieces of clothing. Like the aforementioned "jort," this ensemble is to be approached with extreme caution IRL, because remember, Pharrell has magical fashion powers. Whether sporting the all white ensemble above, camo on camo at a Thierry Richards event or the tuxedo version at the Oscars, Pharrell is the king of bare legs on the bottom, suit coat on top.

14. That Time He Rocked Many A Rolled Ankle Pant For GQ

Clearly, Pharrell is not afraid of unisex styling and his ability to rock a rolled ankle pant is as enviable as his talent for producing a hit record. Be right back — must go bust out my boyfriend jeans and practice my roll in preparation for warmer weather.

Pharrell Williams is pop culture's current obsession — preaching kindness, humility and unique fashion — and the world is picking up what he is putting down. Now, the big question is, how big of a hat can I pull off and how do I get my hands on those all pink Adidas superstars? Also, as the weather warms I am all about perfecting the roll of my ankle length denim, but I am going to have to leave the full short suit to the expert. Some things are meant to remain merely envied. And always remember, if nothing else, kindness is always in fashion.