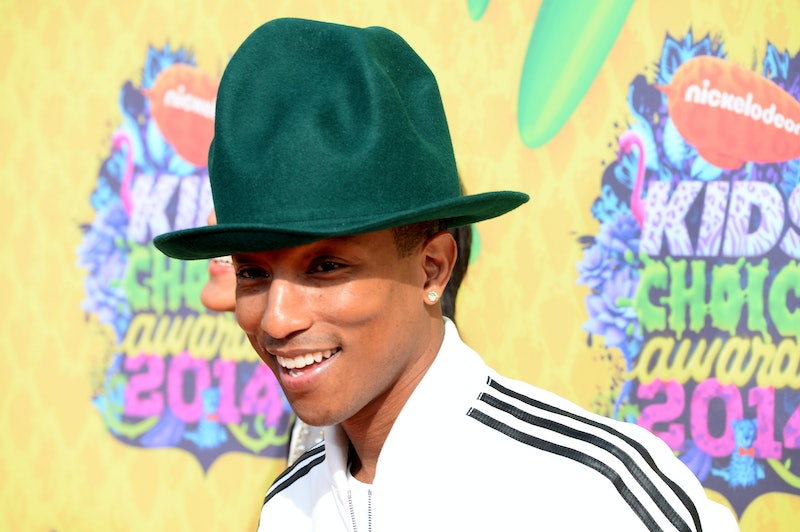 And so begins the onslaught of "Happy"-based article titles: Pharrell Williams and his cavalcade of park ranger hats have been tapped to replace Cee Lo Green on next season of NBC's The Voice . Which, if we're being honest, is sort of a big deal and kind of a coup for the chair-turning reality series. Is there anyone more talked-about in music right now?

The G I R L singer — who seems to be everywhere these days: from Daft Punk albums to his own work — is just one of the latest additions to the rotating (in more ways than one, ahyuck) list of impressive celebrity musicfolk who've signed onto the series. Recently, Coldplay singer Chris Martin also signed on to tackle the mentor role in the series' format shake-up Battles: Round 2, where all the remaining singers perform the exact same song — effectively leveling the playing field and adding a lot more tension to the proceedings compared to Knockout round it is set to replace.

It's a lot of professional and impressive pedigree on one singing competition, as Williams and Martin join regular judges Adam Levine and Blake Shelton, who are currently hanging out with alt-cycle judges Shakira and Usher while Christina Aguilera and the now perma-departing Green work on their full-time jobs (making music).

Regardless, there's no denying that Williams' sound and style is one of the most sought-after in music today. He's also previously worked as a mentor for Team Usher, where his criticism was not only impressive and thoughtful, but helped elevate the energy and performances of several contestants. Considering his progressive ways, adding Williams to The Voice roster shows the series' desire to stay fresh, current, and on-top when it comes to these sort of TV competitions (yeah, we're talking to you, American Idol and X Factor). Also this means that finally someone will be able to give Adam Levine's smooth operator charm a run for its money.