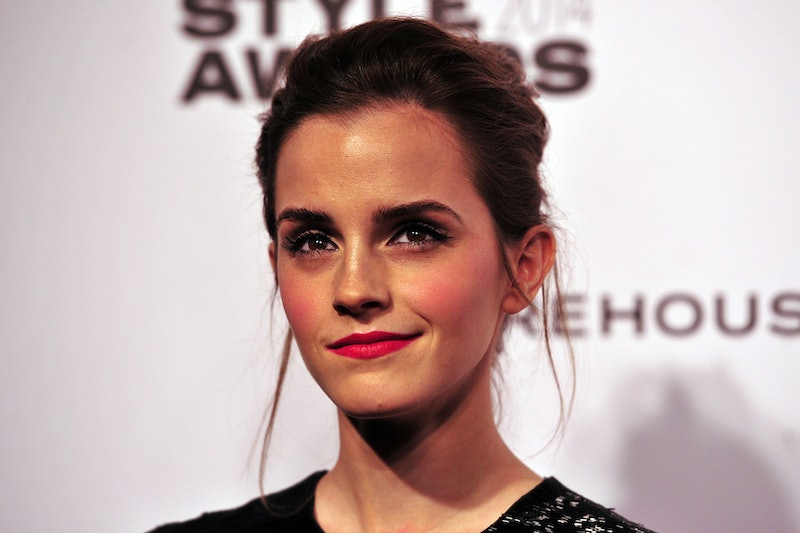 At this point, I think we can all safely agree that Emma Watson is one of the greatest proponents for gender equality that we can see in the world today. After Emma Watson's UN Speech on the matter and her #HeForShe campaign which has brought an outpouring of support from millions including many celebrities, it would be easy for Watson to just let her speech do the work to try and get more people on board and talking about the importance of equality. But on Sunday, March 8, aka International Women's Day, Watson once again took to the stage to continue speaking on the matter, proving that one person can make worldwide change if you continue to work hard for your cause. Watson's Q&A at the Facebook offices in London was both enlightening and powerful as she was able to touch on so many topics that affect women and men today. And much like her UN speech, there were a few golden quotes Watson gave us that absolutely should be repeated to help us achieve gender equality in every day situations and life.

From reciting quotes about gender equality in many different fields of work and countries (with quite a bit of focus on her home country of England) to just sharing her strong beliefs, fears, strengths, and opinions about the important campaign and movement, Watson was a feminist and equality goddess once again. And these are hands down some of my favorite moments from the Q&A.

On the fundamental problem the gender equality movement and women face:

Because Watson's campaign includes men into the conversation about gender equality (as they should be), she made it clear that by people devaluing the "she" she meant "qualities that are associated with the feminine which are found in all of us."

On how women can progress their own attitudes about gender equality:

Watson then added: "Don't let anyone tell you what you can and cannot be. Don't allow it."

On what the word feminism really means (and why it's not a "women's word"):

Watson talked about how she thinks the word "feminism" is associated with such a negative connotation. "I think people associate it with hate. With man hate. And that's really negative. And I don't think that's what feminism is about at all. I think it's something incredibly positive."

On Watson's harshest criticisms & how to grow beyond it:

"For women it's just really acknowledging or feeling comfortable or confident enough to acknowledge that there actually is a problem because it's uncomfortable, it's awkward to acknowledge that there is a problem. But we need to understand that we are complicit... The hardest moments I've had have been comments from other women. It's not just enough to ask men to come and support, we really need to support each other."

On where the gender equality problem starts:

"I think it starts young. I think it starts really young with girls and boys being told what they have to be and it can just be really damaging... I think just encourage and include each other. Don't try and ostracize each other. And just have an open mind and don't have expectations based on the gender or the sex you see in front of you.

There was a BBC report today just about the fact that in math and science and engineering and all of these other subjects that girls just aren't doing as well. And the biggest reason they say for that is these are really associated to be male subjects so young girls feel that if they did those subjects they would be inherently less attractive... Dispel that myth you know?"

On how her sister's specific words about her life have a lasting impact on the movement:

"I asked my younger sister this morning, 'What would be the one thing you would want from the boys in your life?' And she just went, 'I just want them to want to play with us.'... And that translates at every level. We just want to be included."

On how Watson’s mother inspired her the most:

"She was a single working mother, she’s also a type 1 diabetic. So seeing her strength and resilience was really inspiring growing up. Really inspiring. I think she instilled in me, particularly in my teenage years when I was feeling really insecure and confused about what my purpose was, she really really instilled in me that what I was thinking and what I was doing and what I was saying were ultimately infinitely more important than my physical appearance. Even when the world was really telling me the contrary. She really encouraged me to be an individual."

On how the perception of masculinity also needs to change:

"I'm really genuinely disturbed by this idea that men can't cry. And that they just can't express themselves! They can't talk about how they actually feel! It's actually the saddest thing in the world... It's crazy, it's what makes you human! How you feel, being able to express yourself, being passionate, being emotional, it's not what makes you a girl. It's what makes you human. If you've got a beating heart and you care about things, that's great. That's so good!"

On whether or not things can change in our lifetime:

Watson didn't have much faith that everything would magically and quickly change in her lifetime but that doesn't stop her from having dreams and goals to achieve as much as possible (and from cracking a few jokes):

"Our current rate, no. I will probably be dead. But I'm just gonna refuse to die. I think I'm just going to be like 'No. I'm not gonna go. You're not gonna get rid of me until I get to see an equal number of female prime ministers and presidents and CEOs, and more men that feel like it's okay to express how they really feel about things. And more fathers that are present in their children's lives. And until I see us all not policing and oppressing each other and not ostracizing each other. And when I live in a world where this isn't a narrowly defined definition of masculinity and femininity. I'm just not gonna go.'"

On the inequality of women in education & all careers around the world:

"If someone had told me that my brother could go to school and I couldn't I just would have been so hurt and so baffled... And the fact that this is still going on the world over is something that really needs to be addressed. But I guess I just say how and why are you not recognizing the potential of that girl? Why are you not recognizing what she can bring to the table? We need yin and yang. We need that balance. We need female representation. We need leadership. Women have so much to offer. We're such an untapped part of this world. So much potential just gets wasted because girls aren't encouraged in the same way as men are. We can achieve so much."