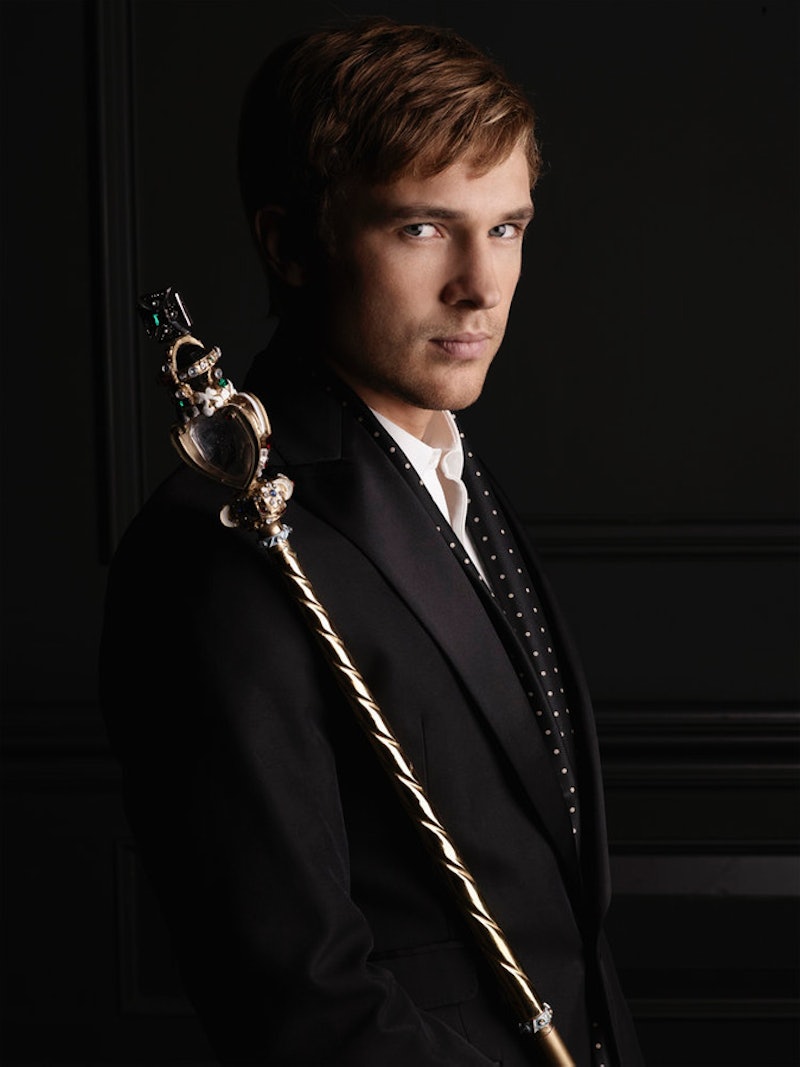 A new royal family is coming to TV and there's no doubt you're going to fall in love with them, especially with Elizabeth Hurley leading the pack as queen. You might as well start practicing your bowing and curtsying now, since Hurley and her ridiculously good-looking fictional family will debut in The Royals on Sunday, March 15 on E!. The show, which has already been renewed for a second season ahead of its Season 1 premiere, follows, you guessed it, a royal family, their secrets, their lies, and their scandals. Based on the promo, you know it's going to be juicy. Plus, a series can't go wrong when it also stars actor William Moseley as Prince Liam.

As Prince Liam, Moseley portrays the son of King Simon (Vincent Regan) and Queen Helena (Hurley). Not only is he heir to the throne, but he's also a playboy, who can't help but take advantage of his status and good looks. With that said, he's said to be a "sweet" guy navigating life after his older brother Robert dies. There's more than meets the eye with Liam, just like there is with Moseley. I think we need to get to know the actor and talk about where we've seen him before. Any guesses? He should look familiar, especially since Moseley was in The Chronicles of Narnia films, where he portrayed Peter Pevensie.

That's right, we get to see sweet Peter as a playboy with a bit of a wild side. Thank you, E!. Thank you. Seeing as Moseley's played a warrior, leader, and king (High King, to be exact) before, he'll pull off his Royals role with flying colors. He basically has royal blood coursing through his veins.

With that said, here are a few other reasons Moseley is the perfect fit as Prince Liam.

He's Been King Before

Seeing as Moseley played a king in Chronicles of Narnia, well, taking on the role of a prince and the heir to the throne is a walk in the park for the actor. Even though Liam and Peter are two different men, Moseley is totally going to work it.

Ever since Moseley came into the Hollywood spotlight, he's been no stranger to having fans drool over him. The show hasn't even debuted and Moseley's already attracted an audience just like his character surely does in the show.

He Knows How To Fight

If a fight brews on The Royals, Moseley can handle it, especially if there's a sword and armor.

On the E! series, Moseley's character has a twin sister, Princess Eleanor. As Peter, he had two sisters and a brother, so, yeah, I think he can handle a sister who loves to party and cause scandals, just like Liam.

He Has Sweet Dance Moves

If there's a big royal ball, well, Moseley will definitely give Liam some kick-ass dance moves. He'll dance list will fill up — fast.

He Relates To The Character

In an interview with E!, Moseley revealed that not only did his grandfather die around the time he scored the role of Liam, but also in the first episode a funeral scene for Liam's brother Robert was filmed, which hit close to home for the actor. Also, Moseley says he is also a rebel like Liam. "In some ways I wouldn't want to do things the way everyone wants me to do them," he said. "I want to live my own life and I don't want anyone to tell me how to live my own life. I would rebel against it."

I don't know about you, but I think Moseley is the perfect fit as Prince Liam. I'm more than ready to get to know this royal family.