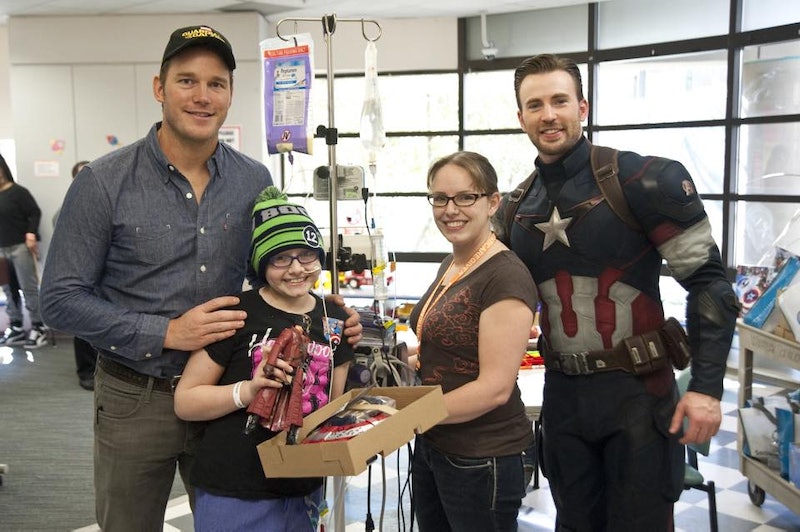 The Super Bowl might be a time of awesome commercials, epic Halftime Shows, and that whole football game thing, but for Chris Pratt and Chris Evans it was a chance to do some good in the world. The man behind Star-Lord and the man behind Captain America were supporting two opposing teams in the Super Bowl, and challenged each other to give back to two their favorite charities depending on which team won the Bowl. Naturally, Evans and Pratt decided to support both charities despite the outcome of the game. In February, the two visited Evans' charity Christopher's Haven with Pratt dressed as Star-Lord. Over the weekend, Evans visited Seattle Children's Hospital dressed as Captain America to fulfill his end of the bet, and it was every bit as cute as you would imagine.

If you thought they would have wrapped up the terms of the Super Bowl bet a lot earlier than this, then it's important to bear in mind that both Pratt and Evans are incredibly busy actors. The fact that they managed to find a time when they were both free to go to Seattle at the same time is pretty impressive, all things considered. Even more impressive is that the two didn't appear to do it for fame or for attention; it was Seattle Children's Hospital that first posted the photographs of the visit, with Pratt adding more photos to his Facebook page after the press had already started rolling in rather than before.

Pratt even added a heartwarming message while sharing The Hollywood Reporter's coverage of the visit, one that went out to Evans and Seattle Children's Hospital rather than to the fans: "Had the immense joy yesterday of joining the real Captain America at Seattle Children's Hospital. Thanks to Chris Evans for being a classy ‪#‎twitterbowl‬ winner. (Psalm 107:19-21)" For those who aren't up on their Bible verses, Psalm 107:19-21 reads, "Then they cried to the Lord in their trouble, and he saved them from their distress. He sent out his word and healed them; he rescued them from the grave. Let them give thanks to the Lord for his unfailing love and his wonderful deeds for mankind."

If that's not enough to melt you into an inspired ball of goop, there are the photos themselves to consider. The children depicted alongside Pratt and Evans look so happy that it's hard to resist a smile; getting to meet two such wonderful celebrities — especially when one is dressed as the paragon of goodness and the American way — is a dream come true for anyone, but these children especially. From the toddler screaming in joy at the sight of Captain America to the child holding Captain America's shield, it's the children who are the real stars of these photographs.

Check out the pictures below and try not to grin.