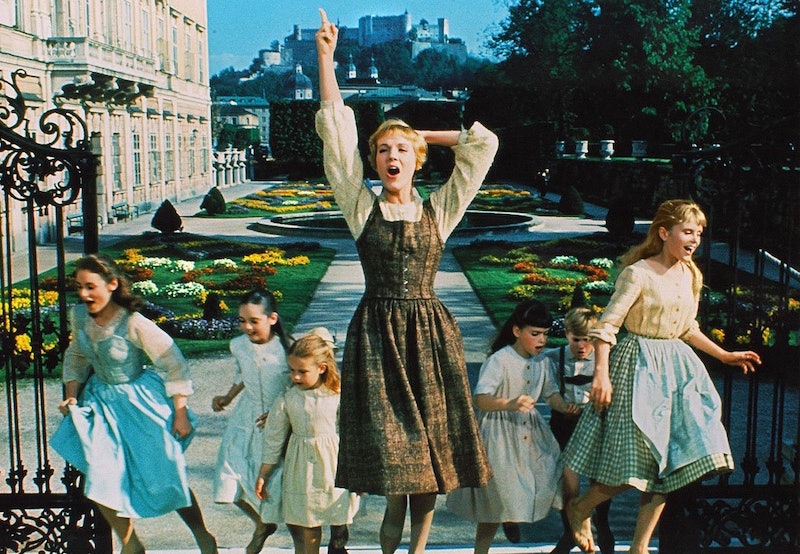 As Lady Gaga demonstrated during the 2015 Oscars, the film The Sound of Music has turned 50 years old this year. Such an iconic movie has gotten tons of coverage since 1965, but there are some things you may not know about The Sound of Music . The film was based on the Rodgers and Hammerstein musical that premiered on stage in 1959. Mary Martin (of Peter Pan fame) originated the role of Maria, but Julie Andrews replaced her for the film. As with any movie musical, songs were added from the stage version, but the movie version of The Sound of Music is the one that lives on in most fans' hearts and minds.

It is a well-known fact that Christopher Plummer did not love being in The Sound of Music, but I like to just tuck that knowledge away when watching the film. (Capt. von Trapp is already a curmudgeon. Do I really have to worry about the actor hating the corniness of the film too?) Yes, there may be moments of The Sound of Music that make me cringe (oh, how I love the song "Something Good," but the moment in the movie makes me feel all sorts of awkward), but it's still the most lovely (and sing alongable) movies of all-time.

If you don't have the time or money to travel to Salzburg, Austria to take The Sound of Music tour in time for the 50th anniversary of the film — don't worry. Here are some facts about the movie that you maybe didn't know. It may not be as glorious as seeing the "Sixteen Going on Seventeen" gazebo in person, but it will hold you over for now.

Julie Andrews Was Not Much Like The Real Maria

The Sound of Music is based on the real-life tale of Maria von Trapp and her family, but the musical took a lot of liberties with their story. Maria and Georg von Trapp were married in 1927 — when Maria was 22 and Georg was 47. Maria came to the von Trapp family home not as a governess, but as a tudor to one of the children. She wasn't as sweet as Andrews's Maria either — the real Maria von Trapp had a serious temper and was more difficult than Georg (who is portrayed as the more domineering parent in the musical). Yes, the family did leave Austria (11 years after Maria and Georg were married though) and yes, they did actually form the Trapp Family Singers, but the rest of the film doesn't exactly stay historically accurate.

Although the movie is correct in depicting the family leaving Austria and the fact that they disagreed with the Nazis, the details are all wrong. Georg did refuse to fly the Nazi flag at their home, but the family didn't actually climb a mountain to flee the Nazis like the end of The Sound of Music shows. The truth was a lot less visually entertaining — they took a train to Italy (Georg was an Italian citizen) and then eventually moved to the U.S. You can visit the lodge that the von Trapp family owns in Stowe, Vt.

And speaking of climbing that mountain, the adorable actress who played Gretl, Kym Karath, had gained weight while filming the movie. On the movie's DVD extras, it was revealed that Plummer asked for a body double when he had to hold Gretl for the final scene due to her weight. Harsh, Capt. von Trapp. Harsh.

And Friedrich Had A Serious Growth Spurt

But Gretl wasn't the only child in the cast who experienced body changes. Nicholas Hammond, who played Friedrich, grew six inches in six months. This caused a problem while filming, particularly for the eldest daughter Liesl as actress Charmian Carr had to stand on apple boxes to make up for the height difference.

Although not strictly a The Sound of Music factoid, the actress who played Louisa, Heather Menzies-Urich, posed for Playboy in 1973. Yes, it was eight years after the film, but the fact is still pretty disconcerting.

Christopher Plummer Didn't Do His Own Singing

Plummer's voice was dubbed for his role of Capt. Georg von Trapp by Bill Lee. Lee was the singing voice of Lt. Joe Cable in another Rogers and Hammerstein musical movie, South Pacific, and Yogi Bear in "Ash Can Parade." Plummer told NPR that his voice was used for the beginning and endings of the song, but Lee was the Capt.'s main voice in the classic song "Edelweiss."

"Edelweiss" Is Not A Real Austrian Folk Song

"Edelweiss" has been often mistaken by Americans to be a real Austrian folk song — even at the White House during a state dinner for the Austrain president. But it was a creation of Rogers and Hammerstein — and it was actually the last song ever written by Oscar Hammerstein II, who died of stomach cancer in 1960.

Mother Superior's Vocals Were Dubbed Too

Plummer wasn't the only actor who needed some singing help. Peggy Wood, who played Maria's mentor Mother Abbess, had her vocals dubbed by Margery McKay. (And unfortunately, Audra McDonald wasn't available for the role in 1965.)

Marni Nixon Finally Showed Her Face In The Film

Marni Nixon is famous for dubbing the singing vocals of Deborah Kerr in The King and I, Audrey Hepburn in My Fair Lady (a role that Julie Andrews had originated), and Natalie Wood in West Side Story. She got her only onscreen role as Sister Sophia in The Sound of Music.

Andrews entertained the kids on set by singing "Supercalifragilisticexpialidocious" from Mary Poppins, which hadn't been released yet. So Andrews was not the singing film superstar she would soon be after winning the Oscar for Best Actress for Mary Poppins (Hepburn in My Fair Lady hadn't even been nominated — burn) in 1965 while filming The Sound of Music.

Liesl Had A Crush On Her Dad

The actress who played Liesl said she had a crush on her onscreen dad. Charmian Carr admitted to crushing on Plummer and his dreamy fake British accent (Plummer is Canadian). And Carr wasn't 16 going on 17 — she was 21. That still doesn't solve the mystery of why the Austrian family was portrayed with British accents in the film.

The Sound of Music Won Best Picture in 1966

Although The Sound of Music is obviously a beloved classic, it also was successful in its day when it won the Academy Awards for Best Picture and Director in 1966. The director, Robert Wise, was no stranger to Oscar wins. He had won in 1962 for Best Picture and Director (which he shared with co-director Jerome Robbins) for another movie musical — West Side Story. So Lady Gaga's performance at the Oscars was a befitting tribute to this heartwarming music classic.