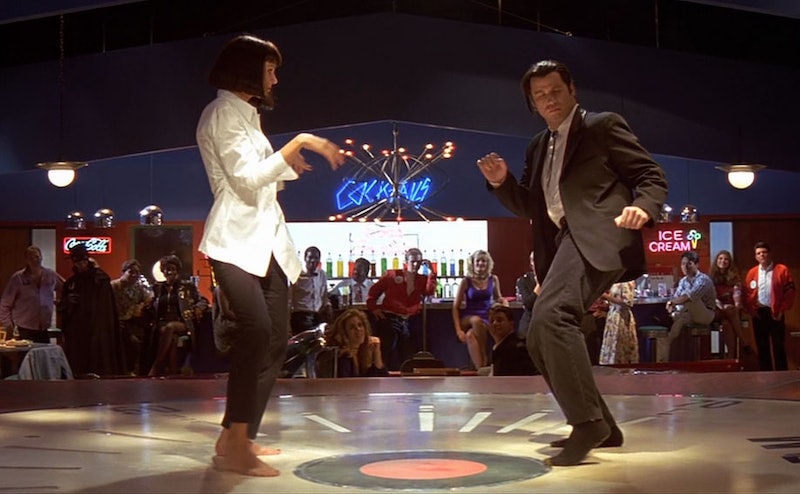 I'm going to need you to scoot your butt over a little bit so there is enough room for all of us in the glorious time machine we just found. At least that is where I assume I am right now, because I just bore witness to this video of the infamous Pulp Fiction dance scene set to Taylor Swift's "Shake It Off" and I can't really do it justice without describing it for what it is: Perfect. My one regret in life is that 5-year-old Taylor Swift didn't yet have enough songwriting wits about her to that this could have been real in 1994, when the movie first came out (yeah, Taylor Swift was FIVE whenPulp Fiction came out. Just let that sink in. Old: We're becoming it.) This song fits with it so flawlessly that I can't imagine ever trying to watch the real version again.

The original dance in Quentin Tarantino's dark comedy is set to the song "You Never Can Tell" by Chuck Berry, a song that inspired dance moves that, as it turns out, fit flawlessly to this song that wasn't yet even a tickle in baby Swift's brain. The song's seemingly perfect match is just one of many eerie discoveries we made about Pulp Fiction after its release took Hollywood by storm, became a cult classic, and then racked up about every award it could possibly get. Without further ado, here is the mashup you never knew you've been waiting for your whole life:

And just in case you needed the reference, here's the original footage:

Look, they already won the contest, so it's not like they really needed the extra help from this. sick. beat. But it certainly helps in the effort of knocking all the other twisters out of the running, doesn't it? In the words of Mia Wallace, "Now I wanna dance, I wanna win. I want that trophy, so dance good." And that fella over there with the hella good hair sure did.

More like this
Taylor Swift Wants To Direct A Movie Next — But You Might Have To Wait
By Radhika Menon
Everything To Know About Taylor Swift’s 10th Studio Album, 'Midnights'
By Grace Wehniainen and Jake Viswanath
Rita Ora Celebrates Finding Her "Fairytale" Ending With Taika Waititi
By Sophie McEvoy and Catharina Cheung
Even If She Tried, Beth Ditto Couldn’t Stay Away From Music
By Ivana Rihter
Get Even More From Bustle — Sign Up For The Newsletter