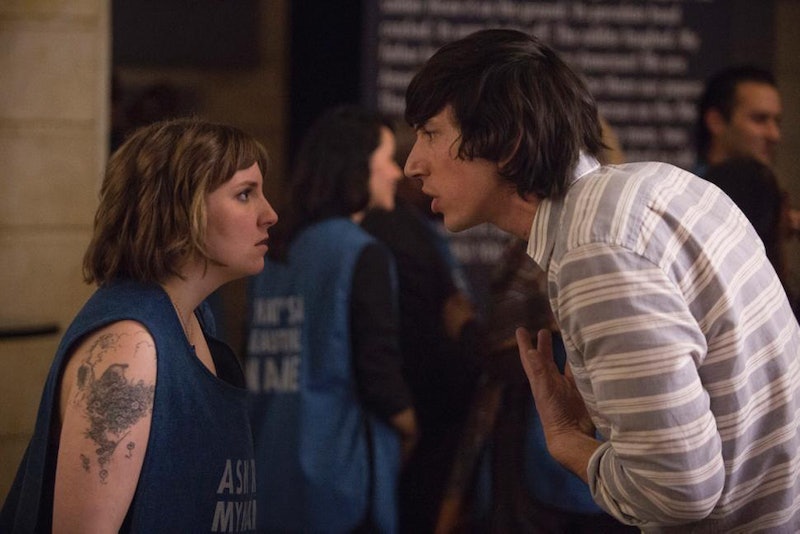 No matter how much you love each other, or how nauseatingly cute your pet names are, there will come a day when you and significant other will have a fight. And that's fine — while frequent fights are unhealthy, never having any fights isn't a good relationship goal, either; in fact, research has shown that couples who regularly have small arguments have healthier relationships than couples who never bicker, and are more likely to avoid the kind of big, blow-out fights that end a relationship. Fighting is no fun, but it also means that you and your partner are invested enough in the relationship (and each other) to not just cut and run as soon as a problem rears its head.

But even if fights are healthy, that doesn't mean they're not total, utter torture. Fights can bring out the worst in us — like the part of you that cares more about being right than your partner's feelings, or the part that believes that all criticism is an intentional personal attack — and they can make us feel out of control, turning us into people that we barely recognize. How can we reconcile our visions of ourselves as smart, fair, loving individuals with the fact that we once called out beloved partner a "Satan-spawned fraud of a being" just because they beat us at a game of Connect Four? (Just a hypothetical.)

Well, luckily, we're not helpless when it comes to how we fight. We have a choice about how we act during them, and whether we surrender to our crappiest selves, or fight against acting needlessly destructive. Fighting with the person you love will always suck, but here are five ways to make it suck a little bit less.

1. Don't Just Imitate What Your Parents Did

Even though we don't consciously try to learn how to fight with a partner by watching our parents (and may have even been actively upset watching our parents fight), most of us picked up how to handle romantic disagreements by watching our folks handle them. If your parents had a wonderful relationship, this is great news. But if you grew up in a house where your parents didn't respect each other, engaged in a lot of ad hominem attacks, or otherwise fought dirty, that can be less than great.

My own parents had a toxic marriage that included lots of long, mean fights whose sheer volume led the neighbors to call the cops more than once. Their fights were the bane of my existence, and I vowed that I would never treat another person like that. And yet, the second I started dating, that's exactly what I did. I didn't even realize what was going on until many years later, when I noticed that I reacted to boyfriends forgetting to tell me about their evening plans as if they had just told me that they were ending our 13-year-marriage.

What To Do Instead: If you find yourself frequently reacting disproportionately to small conflicts with your boo, ask yourself where it's really coming from. When you threw your partner's cigarettes across the room, where you genuinely that mad about catching them smoking? Or were you acting out what you think "adult" couples do when they're mad, because that's what you witnessed growing up?

Don't be afraid to put the brakes on during an actual fight and say, "I'm sorry that I did that; I was acting like my mom/dad there, not expressing my real feelings right now." It's important to recognize that whatever methods you default to when fighting are learned — they're not "natural" or "just what happens." And if they're unkind to your partner, you can unlearn them.

When all the blood rushes into your head and you feel an argument coming on, it can get very easy to forget that the person you're arguing with is also the person that you love. Which is how we end up doing petty, cruel things in arguments like calling our partner names, and bringing up things that we know they're sensitive about (work performance, genital size, tendency to make a face like they're pooping when they're concentrating on a video game). You can get a rush from name-calling in the heat of the moment — but those words are going to stick in your partner's mind long after the fight is over.

What To Do Instead: It's tough to check yourself when a fight is happening, but give it a try. Before you call your partner a name, or reopen an old wound just because you know it would hurt them in the moment, pause. Is there a way to express how angry and hurt you feel right now that won't cause your partner to feel like you don't respect them when this is all over?

So you're arguing about how your partner spends too much time dicking around on their phone when you guys are together. Well, since you're already yelling, this is a great time to bring up how disappointed you are that you two haven't gotten engaged yet, right?

Not even close, bud. Fights become extra hurtful when they turn from "discussion of one topic that is bothering me" to "detailed review of everything you have ever done to disappoint me." Not only does doing this make your partner feel more defensive and under attack; it will also make it less likely that anything productive will come out of the fight.

What To Do Instead: Focus on the words coming out of each of your mouths right in that moment, not the future bestselling book that you are writing in your head called Everything My Partner Has Ever Done Wrong (Yes All Of It) Vol. 1. Stay on top of both yourself and your partner to keep on topic — don't be afraid to say "That is not relevant to what we're discussing, we're going to need to deal with that later" if they start bringing up something totally unrelated, too.

Winning a fight with your partner by any means necessary feels awesome ... for about two minutes. That's roughly how long it takes for the shame of having purposefully hurt someone that you care about, just for the sake of being "right," to set in.

Trust me — I engaged in my own long-term research on the subject with 12 male subjects from 1997-2011. Once I got in a fight with a dude, I was in it to win it, and would do anything to make sure that my point of view prevailed — which usually meant not listening to my boyfriend and his actual concerns, even if they were reasonable. You'll be shocked, I'm sure, to find out that this led to strained relationships.

What To Do Instead: Don't just remember what you're fighting about — remember who you're fighting with. This is someone whom you care about. You don't want to annihilate them just for the hell of it. A fight is many things, but it isn't a contest — you don't get a better relationship if you succeed in wearing your partner down until they give up.

5. Don't Keep Fighting After You've Run Out Of Steam

Have you totally forgotten what you were arguing about in the first place? Then don't be afraid to say "let's stop." It doesn't make you weak, or that you've "lost" the fight; it just means that you value your connection with your partner more than "winning" this fight, and that you're mature enough to admit that fighting for fighting's sake sucks.

What To Do Instead: Just say, "I want to call a time out." Don't add anything judgmental, like "You have pulled us far off course, so I don't think this fight is going anywhere." Just admit that you need a few moments away from the fight (experts recommend taking a half hour), and see what happens.

You might actually see the fight itself blow away in the breeze — because most of our fights are only held together by our willpower, and the second we stop giving them that power to feed off of, they stop existing.