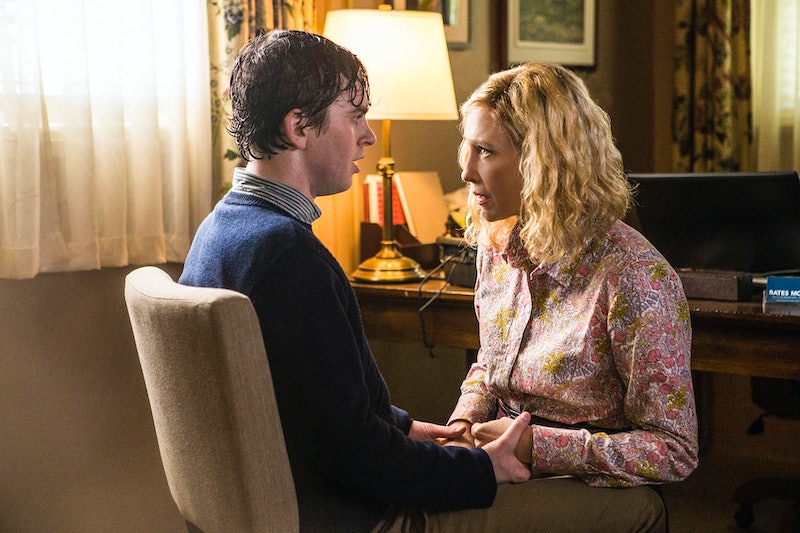 For two full seasons now, fans have waited patiently to see Norman Bates morph into the iconic killer we all knew he'd grow up to be. And while things are certainly heading in that direction (RIP Blair Watson), Norman's descent into darkness isn't the only character journey that will take center stage in Bates Motel 's third season. During a recent conference call with reporters, Vera Farmiga, who plays Norma Bates, shared that Norma will be getting a new love interest in the very near future with a character who has a major impact on Norma romantically.

While taking a few marketing classes at a community college, Norma will meet James Finnigan, played by guest star Joshua Leonard. "It’s a character that Norma bonds intensely with," Farmiga teases. A fact that I'm sure her son will be none too thrilled with since that means yet another man will be taking up mommy dearest's attention. But unlike Norman, executive producer Carlton Cuse assures fans that this is a match-up we, as an audience, will become deeply invested in. "He’s odd, but he’s really compelling." Cuse hints. "Over the course of a few episodes, I think the audience will find themselves incredibly engaged in this relationship with these two characters as it starts to deepen and unfold."

However, those of you who have been strong Norma and Romero 'shippers (Normero?) for the past few years, shouldn't completely give up hope. Farmiga admits that there are "a couple good potentials this season" as for who could eventually win over Norma's heart. "We may or may not be talking capital 'R' romantic. May or may not. But I can’t say.” Is it just me or could that be her subtle way of suggesting that the "R" stands for Romero? Looks like we could have a potential love triangle on our hands.

Speaking of Romero, we're also going to find out a little more about this officer's backstory, along with any skeletons he may have in his own closet thanks to newcomer, Kevin Rahm, who will play a character who Romero grew up with. "Through this storyline this season we get to peel back some layers of Romero," executive producer Kerry Ehrin reveals. "As a viewer I think it’s going to be so interesting to get inside this incredibly stoic, guarded person and see a little more of what makes them tick and what they need and what they’re hiding from themselves."

As for Norman himself, expect to see a lot less of the sweet, innocent boy we've come to know, and dare I say, even like. Because those blackouts are going to start becoming more and more frequent. "He becomes less able to modulate or be conscious of his decline and that causes just really serious consequences in his relationship with his mom," Cuse shares. "I think we explore that in a lot of different ways. That’s really the journey of this season."

When asked to describe the season in eight words or less, Farmiga made sure to choose her words very carefully, saying: "Gonna leave our audience open mouthed and panting." You know, just in case you had any doubt this was going to be yet another gripping year in White Pines Bay.

"There are some pretty rude awakenings to be had," the actress continued. "There are some flabbergasting shakeups, but I can’t tell you what they are. But yeah, there’s going to be some exterminations, some butchery, some crazy absurdity." Really, though, would we want this show any other way?