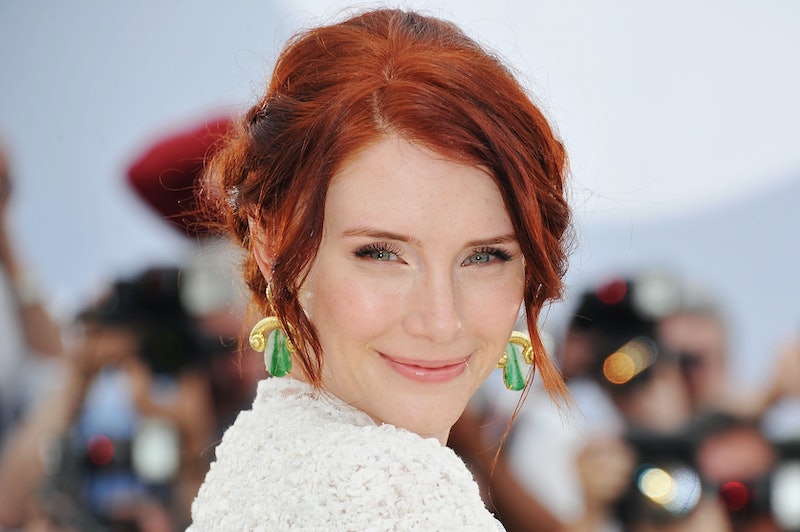 When veteran actress Bryce Dallas Howard isn't being a total badass starring in films like Jurassic World, The Twilight Saga, or The Help, the mom of two is taking her badassery into her personal life, with projects like Canon's Project Imagination: The Trailer Contest. The contest, presented by Dallas Howard and her filmmaker dad Ron Howard, will allow users to submit a sixty second trailer that has the chance of being transformed into a feature length film starring Hunger Games ' Josh Hutcherson. No, really. "I shouldn’t say this, but sometimes trailers are even better than the actual films," Dallas Howard says. "Canon is encouraging individuals to look at their lives with a creative lens, explore, and discover what stories can emerge from those day to day moments. I’ve felt so inspired by this. You can let your imagination run wild. This project is about inspiring anyone and everyone’s creativity, and letting it shine in the best way possible. That’s what trailers allow us to do: hone in on the essence of a creative vision."

To demonstrate how the power of a sixty second trailer, The Jurassic World star made her own, starring many of her family members (or, their feet, that is). Her trailer, Solemates, is a "love story celebrating all the love stories that have shaped my life," she says. "When Canon approached me with this challenge, I thought it would be personally meaningful to immortalize the love stories of my grandparents, my parents, and my own love story with Seth — in 60 seconds! By involving so many of my family members, I hoped that this project would serve as a sort of family heirloom my kids could look at some day with tenderness."

Dallas Howard attributes her work ethic to her family, members of the film community celebrated by fans and featured in her trailer. "From my grandfather, my uncle Clint, to my father, each have shown me that you need tremendous amounts of passion, dedication, and a constitution for hard work," she says. "I feel blessed that I have such remarkable mentors to turn to for advice and to watch perform their craft. When you grow up in a family that appreciates what it takes to create something in complete collaboration, you don’t take for granted all of the people that go on the journey with you. That is why I think I was so drawn to Project Imagination — it is all about creative collaboration, and that’s what inspires me most."

The actress' own trailer emotes a great deal in a single minute, and I was curious to find out which trailers — separate from their films — have had a significant impact on the actress. "The first trailer for Tree Of Life is pretty much the most gorgeous, spellbinding two-minute experience you can ask for," she says. "The trailer to The Social Network gives me chills to this day. I’ve probably watched the teaser to The Bling Ring 200 times. Same with Beasts of the Southern Wild."

"There’s a trailer editor named Mark Woollen, who in my opinion, makes the best trailers in the business. I’ve fallen in love with every trailer he’s cut. I dream of directing a feature film for him to create a 2 minute masterpiece out of one day!"

Another collaborator Dallas Howard has wanted to work with is 22-year-old Josh Hutcherson, who Dalls Howard calls "one of the biggest and brightest stars of his generation." She thought he'd be an idea partner for the project, and it isn't just because she's a fan of the actor's work. "I’ve loved his work since seeing him in The Kids Are All Right, and The Hunger Games is pretty much constantly on loop in my brain, I’m obsessed with it," she says. "With this project, Canon, my Dad, and Josh will be exposed to a massive community of talent who might otherwise never have revealed their stories and voices. The fact that Josh is involved makes this challenge all the more inspiring. His willingness to surrender his talents shows his belief in the immense creativity that exists outside of traditional Hollywood."

"There will never be a shortage of stories to tell," she concluded, "but if we don’t harvest new voices, we will not cultivate the ongoing relationship between an artist and their audience that will enable those stories to be told on a the global scale."

Take a look at Dallas Howard's trailer below. You can submit your own trailer to Canon's Project Imagination: The Trailer Contest here.