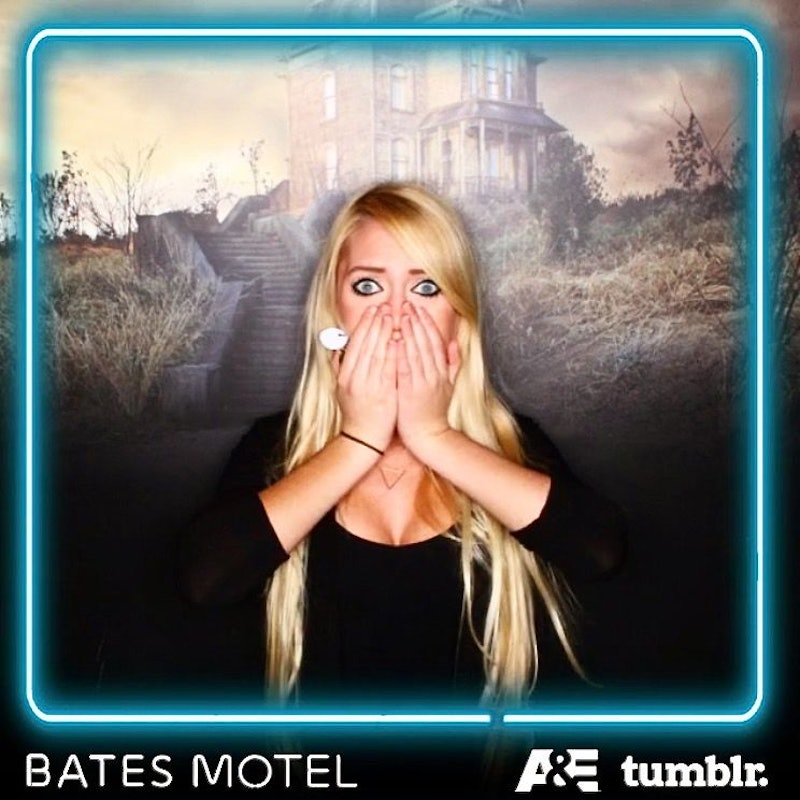 "There is no terror in the bang, only the anticipation of it," Alfred Hitchcock once said. This sentiment, pulled from the mind of cinema's most terrifying horror director, is one I repeated to myself during the 24 hours leading up to my stay at Bates Motel. Yes, Bates Motel — that Bates Motel. The motel where poor Marion Crane was stabbed to death in her shower. Alfred Hitchcock also said: "Television has brought back murder into the home — where it belongs." And thanks to A&E's Bates Motel , starring Vera Farmiga and Freddie Highmore, murder is the nightcap to millions of fans Monday evenings.

To promote the show, currently in its third season, the network created a replica of the iconic motel at SXSW film and music festival in Austin, Texas. When I received an invitation to stay the night, I nearly laughed. My stomach for horror is zero, and surely there would be more than a few surprises in store for those victims, er, guests, who agreed to rest their heads in the '60s inspired motel. But for the sake of journalism, or perhaps my own curiosity, I agreed. Here's what happened during my 24 hours with Mother, Norman, and the Bates Motel staff.

The pop-up motel, located in a busy, central area of the SXSW happenings, is swarmed with people when I arrived to check in for the night. Teenagers taking selfies with the flickering "No Vacancy" sign, curious on-lookers, and festival goers registering to win a night's stay at the fabled motel. I'm usherred to the front office, an eery replica of the office Norman and Norma check in their ill-fated guests. A bulletin board displays a flyer for a celebration of life for Bradley Martin (Nicola Peltz), who infamously left the show after Season 1. A poster for South Pacific, the play Norma and Norman auditioned for in Season 2 hangs off a desk, and Bates Motel flyers, napkins, and the overnight policy adorn open spaces.

A friendly employee checks me in and shows me to my room. Luckily, we breeze past Room 1, and she hands me the key to Room 3. Though I'm a door away from the room stained with Marion's remains, my odds of surviving the night seem slightly better than hers.

The room is small, and the wood-paneled walls remind me of an outdated, haunted Motel 6. Framed press flowers decorate one wall, a painted landscape rests above the headboard, and two portraits — of Norma and Norman — stare with sinister grins from another wall. I wonder if anyone will notice if I flip them over before I go to sleep. My host gives me the general run-down of the motel (luckily, 2015's Bates Motel has wifi) and leaves me to my own devices. Like any Hitchcockian enthusiast, I check the bathroom first.

I would have been a little disappointed if the bathroom was left unaltered. Sure, I'd like the ability to shower without the fear of a kitchen knife cutting through the curtain, but what is Bates Motel without a little blood? If you look closely at the photo above, you'll notice that not only is Marion's memory engrained in the alabaster tub, but so are Norman and Norma in twinning silhouettes.

I decide to shower immediately. With Marion's fate in the foreground of my thoughts, the sooner the better, and while it's still light out. Though my shower was uninterrupted by a screeching score or a gleaming knife blade, I did peak out behind the curtain every few minutes. Luckily, Norman was no where to be found.

After completing a few work-related interviews, I return to the grounds of Bates Motel to find the scene has changed. Still overrun with curious onlookers, the motel is lit with eery lighting, the sign flickering ominously, and from the steps below, I can see a man trying to open the door to my room. It's locked of course, but suddenly the fear of any spooks the network has in store is tempered by fear of strangers knowing where I sleep at night. I wait for him to walk on and approach my door, quickly turning the key and shuffling inside.

I draw the blinds and turn the knobs on all of the lamps in my room. A Hitchcock blonde is smart, and knows her chances of survival are heightened if she can see what's coming, or so I reasoned.

I start to unpack, an action that led to my first scream at Bates Motel.

Opening one of the drawers, one of psycho's creations is waiting for me: This taxidermy squirrel — a wink at Norman Bates' favorite past time — snarles up at me in frozen repose. I slam the drawer closed and recoil in disgust. A known proponent of animal rights, I'm both saddened and disgusted to realize I have to sleep with a dead animal in the same room. But this is Bates Motel, and surely the worst is still to come.

With that realization in mind, I hurry to throw back the covers of my bed.

Luckily, there isn't a taxidermy squirrel, a pool of blood or any other horror my mind can imagine waiting beneath the sheets. Just to be sure, I throw all the covers off and peek underneath the bed frame. The last place to check is my bedside table drawer. As expected, there lies the hand-drawn diary of sex slave Jiao, imprisoned by officer Zack Shelby in season 1.

After checking all the drawers, under the bed, and everywhere else imaginable, I feeling safe — for now. So I dig into the gift basket of course.

Alcohol (a lot of it), snacks, blood-themed sauces, the first and second seasons on DVD, vodka chocolates, protein bars and more are mine to devour. There's also a "special" brownie hand-delivered to my door. Spoiler alert: There wasn't anything special about it, albeit a very delicious flavor.

I return home from SXSW festivities, and the scene has shifted again. The dimly lit motel is devoid of fans, and the only other person on the premise is a security guard pacing in front of the building. Thank god, with the uniform-clad security man in place, I realize no real life harm will come in the night. I smile and breeze past him to my room.

Before climbing in bed, I re-check all the places I've already cleared: drawers, sheets, shower, under the bed — just in case Mother decided to leave me any additional presents. All clear. After lying awake for nearly an hour — how do you spend the night in Bates Motel and not relive Marion Crane's murder in your head over and over? — I fall asleep.

Around 2:15 am, I awake to the sound of a woman screaming and running the length of the motel. Oh dear god, this is it. This is the terrible, blood-curdling scare the network has planned to keep me from sleeping another wink. But the screaming stops, and there's silence. I debate turning on a light, but decide it would bring to much attention to my room and cause more unwanted spooks.

After a minute of silence I try to close my eyes again. Big mistake: A loud, thudding noise accosts my room door. Shit, shit, shit, shit. Silence. Why did I agree to this? Should I run into the bathroom? Should I bar the door? More knocking. And then a voice.

A different voice: "There's no one inside dude, it's fake!"

And suddenly I realize, this isn't the network's doing. This scare is the product of drunk, idiot douchebags passing by after final call at a bar down the street. But where was the security guard? Surely he wouldn't let them bang my door down, would he?

More knocking. Someone grabs the handle and starts shaking it violently. The door slams back and forth against the frame. My heart is no longer in my chest, but bloodying the sheets as it rolls off the bed towards the shower drain.

The men, clearly intoxicated, won't stop yelling or slamming their fists against my door and window. Please make it stop, please make it stop! I plea with no one in particular. My eyes find Norma and Norman on the wall, smiling at me with that "guuuurl, you're about to get murdered" gaze they do so well. CRAP.

I survey my options: I could turn on the light, open the door, and tell the boys to get lost. Or, I could hope my silence offers the men the answer they're looking for: There's no one home, so please, move on. I opt for the latter, and after a few more minutes, they're gone.

While dead tired, I couldn't be happier to wake up, unscathed, the next morning at Bates Motel. I made it! I survived! And like clockwork — as if the hotel staff had been watching my every move — a letter appears underneath the motel door.

"Dear Guest, Congratulations! If you're reading this, that means you've survived your complimentary stay at the Bates Motel. We hope to see you again soon — Mother is very proud of you. Fondly, Norman Bates, Manager." Signed with a splattering of blood, I give them props for creativity.

Packing up, I have no room for most of the gift basket contents — the bottles of alcohol have to stay — though I wonder why I didn't drain my fears in the clear liquid the night before. I pocket the vodka chocolates, DVDS, and snacks.

Taking a final look at my surroundings, I could smile. But I don't. Instead, I shudder, and slam the door behind me. While it was fun (read: terrifying) to be in the shoes of one of Hitchcock's iconic blondes, I don't foresee myself checking back into Bates Motel any time soon.

Except for Monday nights on A&E, that is.

More like this
Anne Hathaway’s ‘The Devil Wears Prada’ Anniversary Post Turned Political
By Brad Witter
All The Sneaky Lindsay Lohan Movie Easter Eggs In Her New Ad, Explained
By Stephanie Topacio Long
Sadly, You Can’t Stream 'Minions: The Rise Of Gru'... Yet
By Morgan Leigh Davies
You Might Want To Rewatch 'Elvis' For This Britney Spears Easter Egg
By Grace Wehniainen
Get Even More From Bustle — Sign Up For The Newsletter