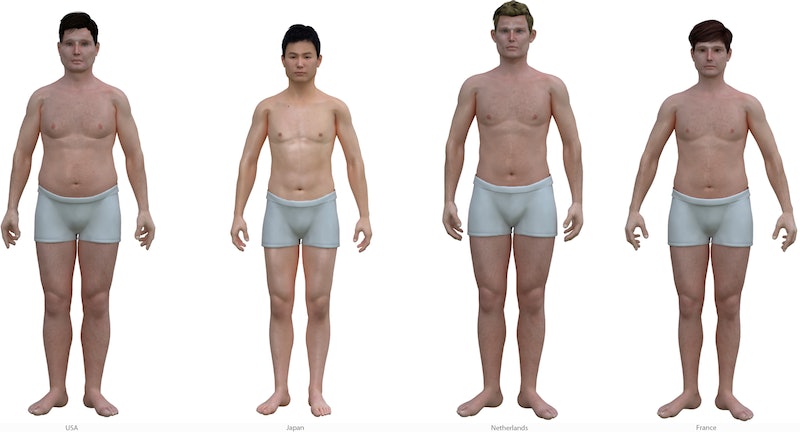 Want to know how your man measures up? Graphic artist Nikolay Lamm has created a highly accurate rendering of the typical American male body, using the average body measurements of guys aged 30-39 (via the CDC). The results is...an image that looks strikingly similar to most guys you know.

“Todd,” as named by The Atlantic’s James Hamblin, is a pretty average looking 30-something guy. Not too tall, not too short. Not too fat, not too thin. He may not have the chiseled abs and “pelvic v” that you see all over Men’s Health, but American Todd is definitely a decent-looking dude you could bring around your friends, provided he had a job and all that.

These findings are normalizing in that they help combat the unrealistic body images perpetuated by men’s magazines and the fitness industry. Especially considering the increase in male anorexia diagnoses and steroid use, said images can be particularly damaging to young men.

Of course, in Hamblin’s analysis at The Atlantic, American Todd is fatter and shorter than his 1950s counterpart, and the average Dutch male is now taller than the average American male. Aside from this point, there are many positives to be taken from this rendering of American Todd.

Sure, he has a little extra padding around the middle and may not be as tall as the Dutch guy, but he’s looking pretty good. Most of the coverage of Lamm’s work, though, has been shock and awe at just how fat Americans are. Looking at the numbers realistically, though, the numbers aren’t really that stunning.

Both average men from the Netherlands and France had a body mass index (BMI) of over 25, which qualifies as overweight. As many researchers have pointed out, it is impossible to calculate how fat or unhealthy a person is simply by using this one indicator. BMI can’t even determine how muscular a person is, so a lot of professional athletes would be considered “obese.”

Nevertheless, the fat alarmists are out in full force telling American men that they need to lose weight. Diet pill companies, gyms, and other snake oil salesmen will surely use these findings to shill “solutions” to the fat American male body.

More like this
What’s The Kibbe Body Type Test That’s All Over TikTok?
By Marilyn La Jeunesse
Bustle Newsletter: May 6, 2022
By Stephanie Talmadge
6 Abortion Advocates To Follow On TikTok
By Sara Youngblood Gregory
The 11 Best Sheets For Night Sweats
By Megan Gray
Get Even More From Bustle — Sign Up For The Newsletter