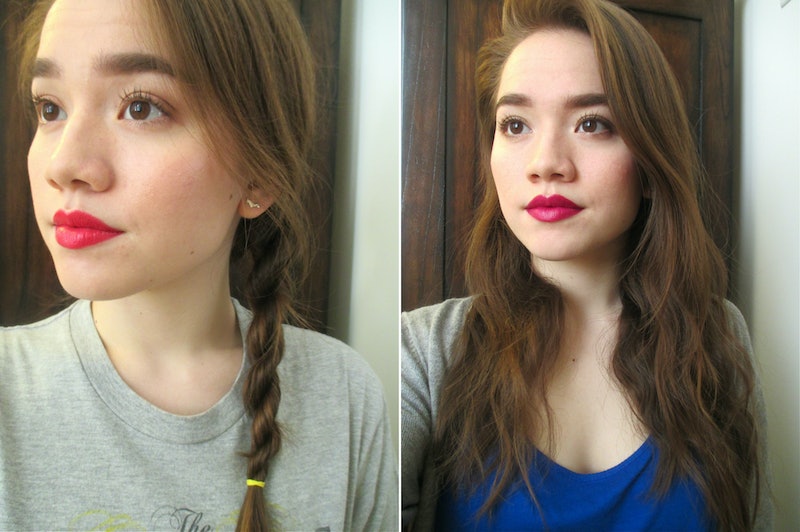 As I've mentioned before, I'm super lazy when it comes to doing my hair. So of course, I'm always down to try hacks, especially ones that help me get wavy hair overnight. One that I've been using since before I could even do my own hair (thanks, mom) is sleeping in a braid. I have naturally straight hair, so, because the grass is always greener, I've always coveted wavy and curly types. But now that I'm a little older and a little wiser than that six year old who went to bed with six braids for optimal crimpage, I realized that those other braids I sometimes wear (when I remember I should try doing something other than just air dry) can also be slept in to the same purpose. And because I was curious just how differently various braids would turn out, I put four to the test.

Before braiding each of these styles, I washed my hair and let it completely air-dry. Only prior to hopping into bed did I actually braid my hair to give each style the same eight hours to set. The next morning all I did was run my fingers through the braid to loosen up the waves. (Optional: set with hairspray.) And the best part is, even with the most time-consuming style, I still only spent about five minutes max consciously attending to my hair. So if you're feeling particularly lazy, you might want to try one (or more!) of these braids. Just keep in mind that even though there's no heat involved with these curls, constantly braiding hair (especially when wet) can cause damage. So make sure to give your hair a break every once in a while so it doesn't, well, break. Happy braiding!

The fishtail, although it takes longer than the other braids here to do, had beautiful results. This braid provided the exact wave effect I was searching for all those years sleeping in a traditional braid. It creates curves instead of dents, and even gives the hair a piece-y look that I rather enjoy.

Final verdict: This braid takes the longest to complete but will produce chic waves. Recommend.

I was pretty surprised by how poorly this one turned out. I sometimes think a regular three-strand braid can have an appearance that reads more crimped than waved, so I was hoping that by adding another strand to the mix, I could get more of a classic wave look. But because working with four strands means that one or two will usually run shorter than the others, so the braid cannot be as long as other types. And because the braid is only commenced at the nape of the neck rather than further up on the head, there is only a small section of waves between two otherwise straight sections of hair.

Final verdict: This braid takes longer to complete and is better for wearing as-is than sleeping in. Do not recommend.

The rope braid somehow managed to turn out beachy waves. Where the fishtail produced uniform waves, this one produced a few different sized waves to make the hair appear to have more volume. And as far as time? The rope braid can be completed in about one minute.

Final verdict: This braid is quick and easy (with practice), and will produce beachy waves. Recommend.

If I'm going to sleep in a traditional three-strand braid, I like to make it a French braid instead so the waves start further up than the nape of the neck. These waves come out more crimped than both the fishtail and rope braids, and are looser at the top and become tighter towards the bottom.

Final verdict: This braid is quick and easy (with practice), and will produce cute crimps. Recommend.

More like this
8 Buzzy Fall 2022 Hair Color Trends To Watch
By Paris Giles
Doja Cat Shaved Her Head & Debuted Eyebrow Art
By Olivia Rose Ferreiro
"The Sachel" Is The New Haircut To Know Now
By Justine Knight
Your Guide To The Octopus Haircut, The Chic Shag-Mullet Hybrid
By Danielle Sinay and Jordan Murray
Get Even More From Bustle — Sign Up For The Newsletter