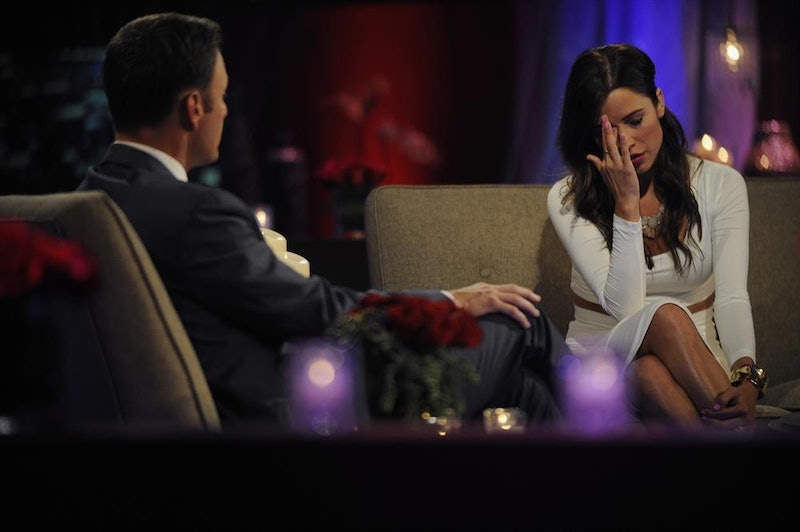 As per usual, Chris Harrison promised us a shocking twist on tonight's Bachelor finale, and for once, he actually wasn't exaggerating. When it came time to announce who the next Bachelorette is on After The Final Rose, he dropped a major bomb on us: Both Kaitlyn and Britt will be the Bachelorette, and on the first night of the show, the guys of their season will vote on "who they think would make the best wife." Yes, these are actually the exact words that came out of Chris' mouth — and yes, I am sure, because I rewound my DVR twice to make sure I wasn't hearing things. And as far as I'm concerned, the decision to have two women compete to be The Bachelorette is the worst one ABC has made since Juan Pablo. Update: Bustle reached out to ABC, but the network declined to comment.

Here's the thing: It'd be easy to call The Bachelor process sexist if The Bachelorette didn't exist. Twenty five or more women competing for a single guy and his fleeting attention? It's a little messed up if there isn't a female counterpart. Now, Chris was handed the role of the Bachelor, and Britt and Kaitlyn have to compete again to be Bachelorette? After everything that happened to them on Chris' season? That's pretty unfair. And honestly, who wants to stand up in front of a room filled with guys and wait as they all pit you against your friend? That sounds like a nightmare.

It was clear when Chris brought the ladies out at the end of the show that they were none too pleased that this was going on — and neither was the audience, who seemed absolutely dumbfounded when Chris delivered the news. I'm pretty sure it wasn't the good kind of shock that ABC was hoping for, either. The women looked mad, and the smattering of men in the audience were speechless, and if everyone at home was anything like me, the rest of us were just plain uncomfortable... and a little disgusted.

And as for the ladies who've graduated from Bachelor Nation, who know firsthand how much this face-off would actually hurt, they were pretty infuriated. And leading them is Sharleen Joynt, from the days of Juan Pablo past:

And Catherine Giudici, who is doing exactly what I'm doing right now:

And the always fabulous Andi Dorfman, who is either afraid of ABC or far too genteel to say what she's actually thinking:

All of these women have one thing ABC does not: Respect for their fellow women. In fact, it's kind of strange to me that ABC didn't see this reaction coming. I cannot see anything good coming of this arrangement, as much as I'd love to reserve my judgement until the premiere.

But there is one silver lining. This next season? Chris Harrison finally gets to be right.