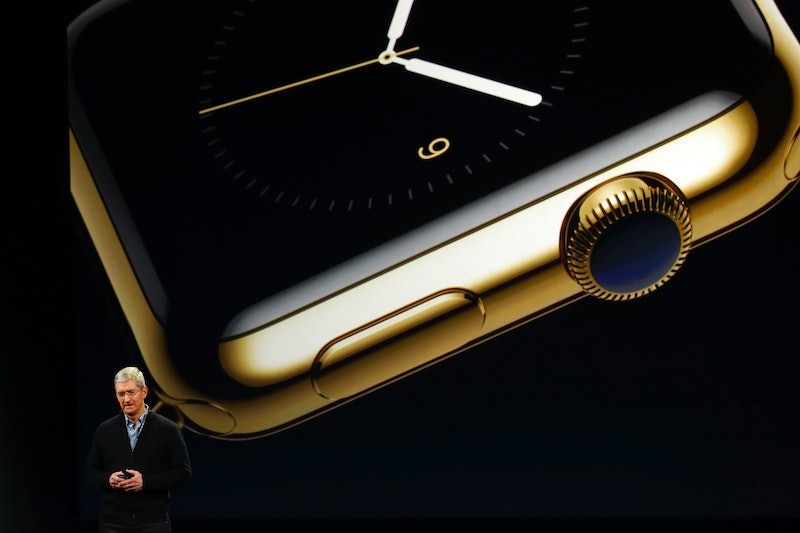 Whether it's a fashion statement, a handy gadget, or a combination of the two remains to be seen, but the new Apple Watch is generating plenty of buzz for reasons unrelated to its sleek look: The most expensive model of the Apple Watch Edition has a sticker price of $17,000. At selected Apple Stores across the country, you can drop the big bucks and get a 18-karat gold — your choice between rose or yellow gold — iWatch of your very own.

So, will devoted Apple fans pay that much for a wrist accessory which requires you to own an iPhone as well? You betcha some people will. Still, even if you do have the money available for such a purchase, is it worth it? In the luxury watch market, $17,000 will get you a decent Rolex, but there are plenty priced higher. Needless to say, watches at that price point are less about telling time and more about the statement the timepiece offers.

If you have the funds to buy the rose gold Apple Watch with the sapphire display — even the adjectives sound expensive — more power to you. But before you spend, it might be worth taking a look at what other things you could get for that $17,000 that's burning a hole in your pocket. If you think long term (yeah, yeah, boring and prudent), you might get more bang for your buck.

Firstly, here's what you could get...

You Could Make A Dent In Those Student Loans

Most American college graduates carry upwards of $20,000 in student loan balances, and that number increases for grad students. Paying student loans every month prevents a lot of Americans just entering the workforce from being able to buy a car or a home. Wouldn't it be nice not to worry about that payment every month?

You Could Put A Down Payment On A House

Seriously, think about that: Rather than paying rent to a landlord every month, you could take a huge step toward home ownership. While $17,000 might not stretch very far in some of the country's more expensive real estate markets, a down payment of that size would reduce the amount of your monthly payment, and may be enough to let you avoid paying private mortgage insurance, which also adds to your total costs.

You Can Save For Retirement

Look, it's a long way off, but it's worth thinking about how you're going to spend your golden years. It's near the maximum allowed for some employer-matching retirement accounts like 401k plans, but a one-time contribution of $17,000 would be a nice chunk of change that would mature at the same time you do.

You Could Travel The World

OK, maybe not the entire world, but if you spent it right, and take advantage of discounts and loyalty plans, you could spend several months traveling in style on $17,000, and one woman detailed how she did it on the money tips site Wise Bread.

You Could Pay Off Those Credit Cards

The average American has around $15,000 in credit card debt, according to CNN Money. Paying them off in one lump sum is obviously a better deal than paying them off over time, because you avoid the costly interest payments that can increase your balance.

You Could Buy Season Tickets

It doesn't all have to be responsible, prudent-minded spending — you can have some fun with your mythical $17,000. There are season ticket plans for the Stanley Cup-champion L.A. Kings in the $5,000 to $6,000 range, and, it could be a source of income if you sold tickets to games you couldn't go to (face value only, of course, no scalping!).

You Could Also Just Sock It Away

For most of us, $17,000 is a lot of money. Savings accounts aren't the best deal right now, with the average interest rate at only about 3 percent, according to The New York Times. But the least risky thing to do with $17,000 is to put it in the bank, like your grandmother told you, and let it gather interest. That way, if you have an emergency, it's readily available, unlike other investment vehicles where you may have to pay penalties and fees to access your money.

You Could Buy 48 Apple Sport Watches

Hey, the Apple Watch is really tempting, and if you're determined to get one, there's no amount of sense-talking that will change your mind. It's your money, after all. But it's worth thinking hard about what that money could get you, and, if you really want one, try the bargain version first. That way, if you really have to drop $17K on a watch, at least you've done your homework.