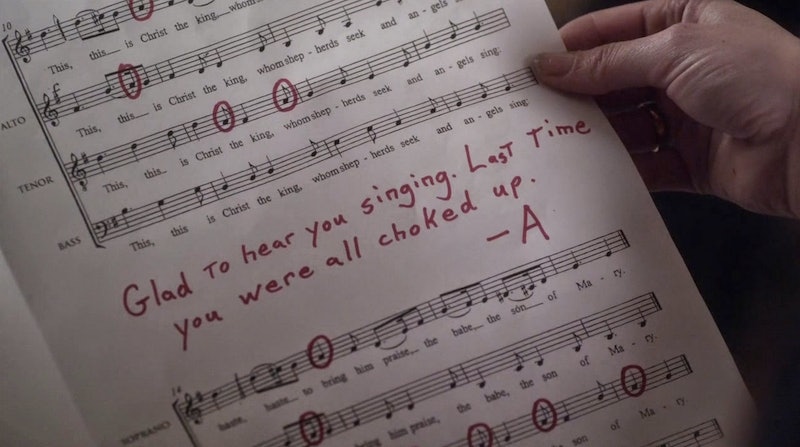 You don't have to tell me how you're feeling about Pretty Little Liars ' Big A Reveal because, like A, I already know. After five seasons of deaths, plot holes, red herrings, black hoodies, and Aria is A theories, ABC Family and I. Marlene King are finally going to give us what we want. Well, what we think we want and what we definitely deserve — at least, that's what the series has been teasing for the past few weeks. But, when I say that I know how you're feeling — what I actually mean is that I know that you don't know how you should feel about the Big A Reveal. Because you're feeling EVERYTHING.

It's really only normal that after five seasons of terrifying uncertainty, questions, and whole-heartedly believing that you'd figured out the A-game out before PLL could reveal Big A's identity, that the idea of knowing who A is is confusing for you. Because this is a big moment, people — if you weren't confused, I'd be worried about you (kind of like how I'm worried about my sanity if my Big A theory isn't correct). And, on Tuesday night, when PLL finally drops the bomb to end all bombs in Rosewood, you're probably going to be overwhelmed. Scratch that, you'll definitely be overwhelmed and the 60 minutes of "Welcome to the Dollhouse" will look and feel something like these 9 GIFs.

Remember when PLL first teased the #BigAReveal and you were all like, "Whaaaaaat? Doesn't this show have two more seasons left?"

After all of this time, I can finally rest easy knowing the truth. (HA.)

But wait, do I really want to know the truth?

My life won't be the same after this, how will I go on?

I mean, who thought this would be a good idea? I don't want to know who A is if the Liars don't know. Ugh, I'm more frustrated than I was when Melissa had "a secret" for six months AND THEN IT WASN'T EVEN THAT IMPORTANT.

We're not really going to find out — this is going to be another one of those times where I'm left screaming at my television and cursing PLL to its many graves.

Wait — WHAT IF MY THEORY IS RIGHT? There's nothing scarier than being right about A's identity. If I could figure it out, it might mean that I'm just as big of a sociopath as A is.

8. Stress, So Much Stress

Just put me out of my misery already and tell me who A is. PLEASE.

Were you right? Were you wrong? NO, YOU ARE NOT FINE.