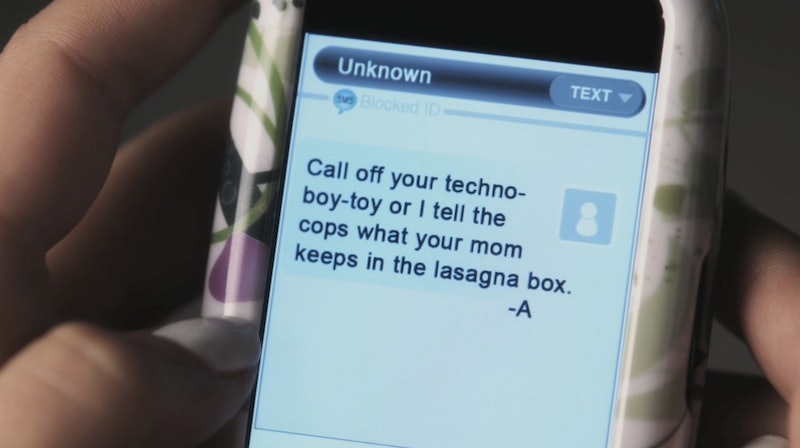 After five seasons of jumping every time your text message tone went off, you can finally appreciate your cellphone again. Do you think that sounds like an exaggeration? Well, don't say that to a Pretty Little Liars fan — because A's been haunting our inboxes and our nightmares for a very long time. Which is why, obviously, PLL Season 5's Big A Reveal is going to change everything and I'm not just saying that because it'll finally validate my theory that Ezra is Varjack on PLL . Finding out the identity of A is going to change everything — including my relationship with my pizza delivery guy.

If you haven't been consumed by the "Who is A?" question for the past five seasons of the ABC Family series, you're probably lying to yourself. Because Pretty Little Liars is a lifestyle and carefully piecing together your extremely intricate A theory is a full time job (luckily for me, it actually is my full time job). Now that we're rapidly approaching the finish line and the reward of learning A's identity, however, it's time to look ahead to all of the things we'll be able to do once we can put a face to the villain's name.

Think of all of the times you held your breath when you saw a black hoodie in public or how you always wish you could spend more time searching your favorite PLL 'ship's tag on Tumblr but couldn't because you were looking for A clues. Well, that's about to change, people and here are 9 ways your life will be SO different when PLL finally confirms A's identity.

You Won't Be Looking Over Your Shoulder CONSTANTLY (Only Sometimes)

Right now, everyone's a suspect — including my pizza delivery guy — but that will all change once PLL shows me A's face. Now I can finally order my pizza in peace.

You'll Stop Wondering "Who?" & Start Wondering "HOW DIDN'T I SEE IT BEFORE?"

You thought you'd stop thinking about A once this was all over? NOPE. There are still so many questions to be answered.

In Fact, You'll Just Start Questioning Everything About Everything

If *fill in the blank* is A, what's been slipping through the cracks in my real life?

You Can Finally Focus Solely On Your Favorite PLL 'Ship

More time for me to search "Haleb" on Tumblr instead of "PLL A Theories" sounds good to me.

You Can Finally Take Your Barbies Out Of Storage

Where you only left them for "safe keeping" — not because you thought A was going to steal them and use them to plot your death.

You Won't Be Suspicious of Brits Anymore

Every time Wren returns to PLL he's sketchier than he was the time before and, with the introduction of his roommate in London, we've been forced to be suspicious of all Brits. Wren knows everyone, after all.

Seriously, wearing a black hoodie won't mean that you're A anymore — unless, of course, you are A.

A's obviously going to be someone who's been skulking around Rosewood for awhile and someone who knows the liars very well. So how am I supposed to trust anyone in my own life anymore?

You Can Finally Text That Number You Don't Know Back

It's probably that cute guy/girl you met last weekend, but you haven't been able to find out because WHAT IF IT'S A? Now you'll know that it's not...maybe.