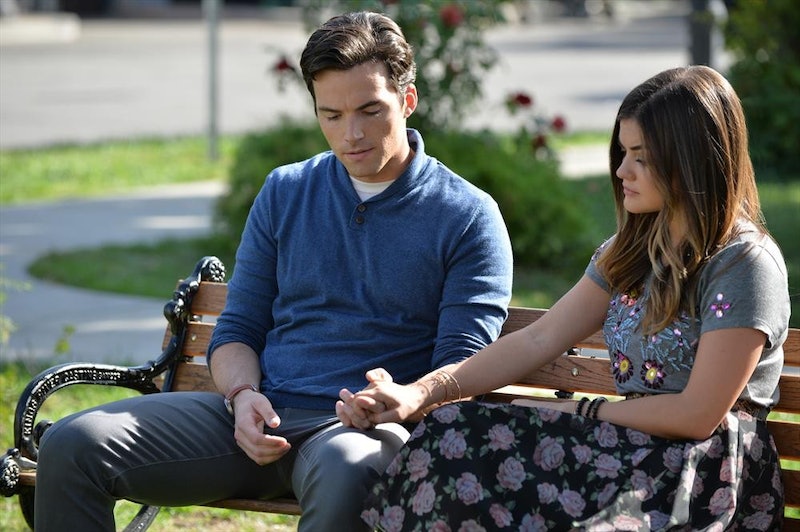 I couldn't even bring myself to shed a tear for the end of this 'ship because, frankly, it was about time that Pretty Little Liars got this over with. On Tuesday night's episode, "To Plea Or Not To Plea," Ezria broke up once and for all — at least, that's how it sounded. I was about as sad as Aria seemed about the crumbling of the PLL 'ship that started it all (which means I wasn't really sad at all) — mostly because I was too busy thinking about what this means for the Ezra is Varjack PLL theory that last Tuesday's episode more or less confirmed. What does a break up and Aria moving on mean for Ezra as the Big A? Well, definitely nothing good.

Personally, I'm convinced that PLL is finally setting us up to see Ezra as A because everything about him just screams A to me these days. (Remember when the series made Ezra the creepiest guy on the block? Well, I'm getting that vibe again.) And Ezria finally calling it quits might be the straw that breaks the camel's back and leaves Ezra unhinged, careless, and messy — all things that could seriously threaten the success and discretion of the A-game up until this point. Ezra seemed a hell of a lot more upset about losing his girl than Aria seemed about losing him. And we all know how things went the last time Ezra lost a girl that he'd fallen pretty hard for — he dated her BFF to do research for a mystery novel.

I'm convinced that by breaking up Ezria — one of the only things that actually humanized Ezra and put a shadow of a doubt on him being A — PLLis setting up Ezra for the downfall of a lifetime. And, like Keegan Allen teased about the Big A Reveal, it'll be a heartbreaking and beautiful moment to watch him crash down to the very deep bottom of his elaborate scheme and reveal himself to us. There's always been something off about Ezra and finally calling it quits with Aria — the person who might've been holding him back from going fully postal on the liars — is possibly the push he needs and we need to see him as A, Varjack, and everything in between.