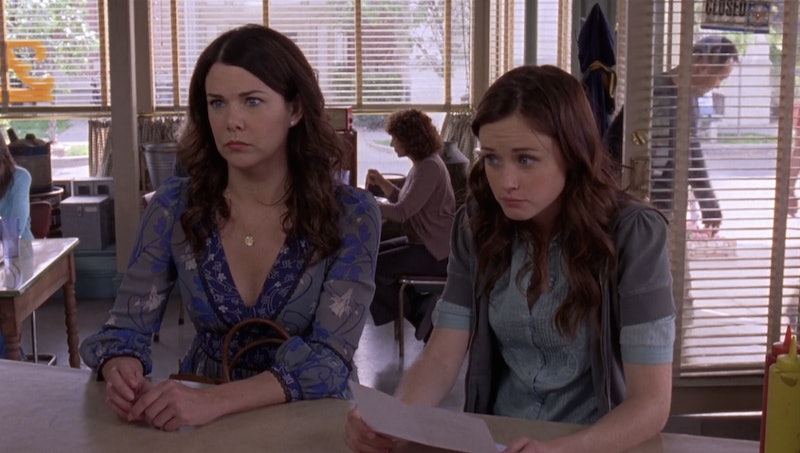 As every fan old and new knows by this point, the final season of Gilmore Girls brought with it a lot of pain — mainly because it was the final season of a show-slash-pop culture phenomenon that none of us were ready to let go of. After investing seven long, glorious years into the journey of Rory, Lorelai, and the people of Stars Hollow, I had my Kleenex out as early as the first episode of the final season — so you can only imagine what a wreck I was by the finale. Between Liz's new baby and Logan being in London (sorry, but Team Jess forever) there were a lot of great things happening leading us up to the finale.

And "Bon Voyage" was a wonderful end to the beloved show. The finale ended on such a satisfying note that it made saying goodbye to my favorite show a little bit easier. Not completely easy, of course; there are very few shows on air that can even compare to Gilmore Girls, even now. However, I can't think of a more perfect way to have completed these characters' journeys, and thinking back upon "Bon Voyage" always brings a tear to my eye.

Let's take a trip down memory lane and relive the 14 best moments from the Gilmore Girls series finale:

Watching an adorably nervous Rory meet her idol — in her pajamas, no less! — was a sweet moment, one that felt truer to Rory's character than anything else.

When The Opening Credits Happened

IF YOU'RE OUT ON THE ROAD, I WILL SING THESE LYRICS FOREVER AND EVER, EVEN WHEN THIS SHOW IS OFF THE AIR.

When Rory Got A Job

Our Rory got a real job, reporting from the campaign trail of up-and-coming Senator Barack Obama! Even though the timing sucked (the rollercoasters!) it was great to see Rory landing the job of her dreams and her family's pride.

When Lorelai Said "After-Dinner Drinks For Sure"

Look how far the Gilmores have come! For me, this is when the tears started.

When Everyone Else Found Out That Rory Got A Job

Nothing summed up Stars Hallow as perfectly as the disappointed looks on Kirk and Babette's faces upon learning that their long-planned graduation re-enactment party was no longer happening because Rory got offered some job that they cared nothing about.

When Rory Bonded With Lane

After Rory and Lane spent most of the final season apart, seeing the two of them say goodbye in the finale brought some much-needed closure to one of the show's best pairings.

When Babette Knew It Was Going To Rain

You can blame Babette's swollen ankles for one of the night's funniest moments. "Luuuuuuuuuuuuuke!"

When Lorelai Checked On Rory Sleeping

The familiar music, the lack of dialogue, the amazingness of Lauren Graham's cry face — everything about this scene was heartbreaking.

When They Pulled Up To The Party

Every single thing about this scene was perfection. The surprise on Rory's face, the pride on Lorelai's, the sash made from one of Kirk's mother's nighties... perfect. Just perfect.

When Emily And Richard Arrived

Hearing a post-heart attack Richard say that Lorelai is a "remarkable person" whose influence on her town was tangible (while Emily rolled her eyes at his sentimentality, of course) was great. Watching Emily realize that Friday night dinners with Lorelai were continuing was even better. And hearing her tell Rory, "It's an honor to be your grandmother, Rory Gilmore," was the best. Favorite TV grandparents ever.

When Taylor Gave His Speech

"With these last, painful contractions, we push you out into the world, spank your bottom, and wipe the amniotic fluid from your eyes as you issue your first independent breath..." What would a speech from Taylor be if it wasn't weird, uncomfortable, more than a little gross, and yet somehow perfectly him?

When Lorelai And Luke Kissed

When Rory Told Lorelai, "You've Given Me Everything I Need"

If I hadn't been sobbing before, I was then. No line would've summed up Rory and Lorelai's remarkable relationship better than that.

When The Series Ended Exactly As It Began

Lorelai and Rory sitting at Luke's, eating tremendous amounts of food and blabbering away at warp-speed about nonsensical topics. I'll forever be glad that the Gilmore Girls Season 7 writers ended the series in the same lovable way that it began, allowing it to come full circle in my heart.