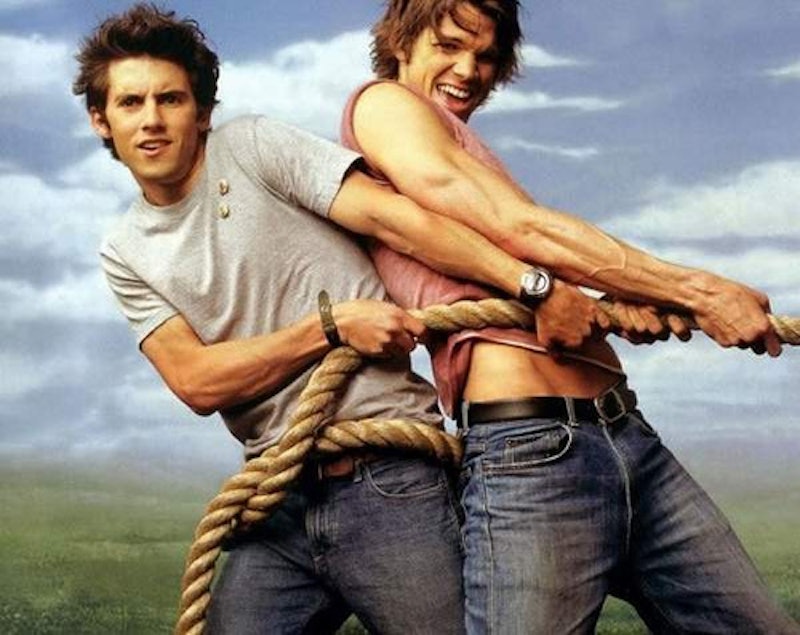 There are many things about Gilmore Girls that the majority of the show's fans tend to agree on: Luke and Lorelai finally ending up together and Kirk being the series' absolute best character, for example. Yet mention one aspect of the series to a group of fans, and you're bound to get a dozen very different, very heated responses: the topic of Rory Gilmore's boyfriends. Because while fans might agree on practically everything else about the series, the issue of which guy in Rory's life was her true soulmate still reigns large, eight years after the show went off the air.

Some people vote for Logan, whose proposal she rejected near the series' end; others believe that Jess was the best and only choice; a few even think that none of Rory's boyfriends were all that great, and that instead, she should've gone for the friend-zoned Marty or stayed single forever.

Whatever your opinion on the matter is, though, I'm here to tell you: it's probably wrong. Below, the (aka my) official (aka totally subjective) ranking of Rory Gilmore's boyfriends, dates, crushes and more, from worst to best:

11. William From the Laundry Room

Although Emily did not approve ("Rory, you're in Yale, not Amsterdam!"), Rory decided to be bold and ask a guy out herself. Unfortunately, when she did, he said no, and later, she thought he was spreading rumors about her and making fun of her to all his friends. It turned out he wasn't, but still. No one rejects Rory Gilmore.

It's not like anyone thought an Emily-arranged blind date would go well, but no one, especially Rory, imagined it would be quite that bad. Graham, Rory's date, took her to a sports bar where he proceeded to get drunk with his obnoxious friends and barely acknowledged her existence. Worst of all, his terribleness caused Rory to call Dean and spend the night flirting with him, only to get interrupted by Jess, who she rejected. Dammit, Graham.

Tristan was the original bad boy, way before Jess came into the picture. Unlike Jess, however, whose rebellious behavior took the forms on skipping school and leaving home, Tristan's came out in insults and mean nicknames. Yes, he was hiding a crush, but Rory deserved way better than a guy who made fun of her virginity and called everything she did weird. Hope military school was fun!

Rory's hot TA (he looked better without the glasses, I swear) was just a crush, but he did make her re-evaluate her relationship with Logan — if only a brief second — right when things were going so well. For that, he gets placed low on this list.

Trevor sat at the same side of the table as Rory on their date. It was awkward.

Sean and Rory's relationship started with him walking by shirtless and ended with him trying to initiate a three-way with her and Paris. It was a short-lived romance, but not an uneventful one.

Look, Dean was a nice guy. He was sweet, caring, and attentive, the "perfect first boyfriend," as Lorelai said, for Rory. Yet that's just it — he was a great first boyfriend. Dean's small-town mentality might've been fine while Rory was still living in Stars Hallow, but once she left for Yale, it only held her back. Rory needed someone who challenged and excited her, and Dean, with his high school diploma and construction job, was not that person. Plus, he cheated on his wife to sleep with her. Not cool.

Look up "friend-zoned" in the dictionary and Marty's face is probably underneath. The poor guy never stood a chance thanks to Logan, but honestly, he might've been too boring for Rory, anyway. Sure, he was cute, and they both liked books and take-out Chinese, but Rory in college needed a guy who was more willing to take a risk — someone who, well, did things like the Life and Death Brigade. Plus, there was that thing where he didn't tell Lucy about her and ruined their friendship. Next!

Poor Robert. The sweet, friendly guy who asked Rory out, didn't realize he was only being used to make Logan jealous. And to think he took her to a Quentin Tarantino party! The guy deserved better, but alas, not with Rory.

The thing about Logan was that my feelings about him changed every single episode. Sometimes, I loved him; he was smart, witty, and funny, the perfect companion to the ambitious Rory. Sometimes, I tolerated him; his antics could get a little annoying, and the charms could wear thin. And sometimes, I hated him; he was pretentious, arrogant, and entitled, the exact opposite of Rory in all the wrong ways. By the end of the series, I mostly just pitied him; Rory had outgrown him, and as viewers, so had we. Not the worst of Rory's boyfriends, but also not the best.

I'm the first to admit that Jess wasn't the best guy for Rory while they were dating. He could be thoughtful and caring, but he was also incapable of having a healthy relationship. There were too many issues — his family stuff, his school problems, his jealousy — and while they had their moments, Jess and Rory's teenage romance wasn't what either of them truly needed.

Yet that's not to say that Jess wasn't her soulmate, because once he left Stars Hollow and got some space, Jess matured into someone Rory could actually love. He published a book, found a job he enjoyed, and gained enough wisdom and clarity to knock sense into Rory when she was ruining her life living at Emily and Richard's. They may never have found ever-lasting romance on the show, but in my heart, I believe that they got together sometime in the future, and that now they're living happily ever after, writing books and being in love and acting like the fact that their relatives are also together is cute, not creepy. Jess + Rory forever.