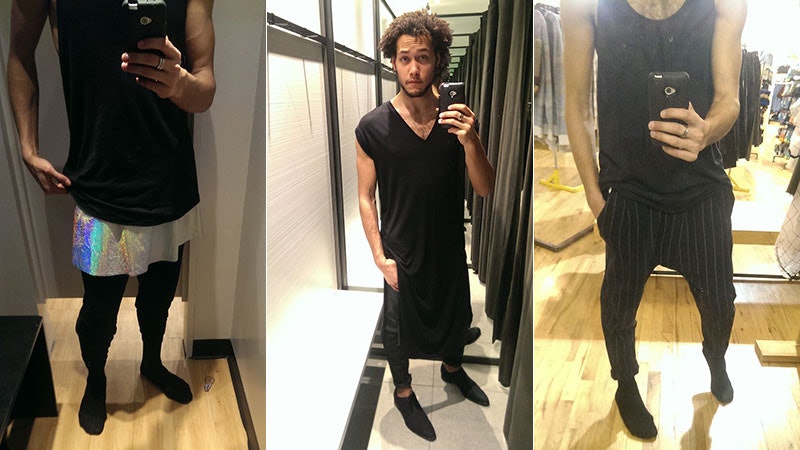 As the title suggests, I — a cisgendered male (someone whose current gender identity is in line with the gender role they were designated at birth) — spent a large chunk of my Tuesday shopping in the women's sections of some of the clothing retailers in my local mall as a personal experiment, which included Zara, the company I am currently employed by and sincerely enjoy working for. Well, I was pretty successful — if I do say so myself — and I have the pictures to prove it, though some of them include pieces of men's clothing that I was already wearing, so as to showcase the items I found as parts of an ensemble and give an example of how I might wear them out in public. But first, I just wanted to make sure that the message behind this listicle — the reason why I think it's so necessary to share this kind of experiment — doesn't go unnoticed.

Not long ago, after writing an article about what I've learned throughout the development of my fashion sense and through my personal experiences shopping in the women's section as a cis-male, it became very clear how important it is to me that a large part of my work as a socially active constituent of this generation (work that is specifically available to me as a cis-male) be funneled into expanding the borders of masculinity — into broadening our understanding of what it includes, and of what it really means to be "masculine" — so that they venture outside of the standards that society has set.

For many of my colleagues, the patriarchy is seen as a source of much contempt, and rightly so — when looking at oppressive structures, patriarchal systems possess a pervasiveness and tenacity akin to that of their racial cohorts. It is as Harsha Walia wrote in her piece Reimagining Feminism on International Women's Day :

"Patriarchy is not secondary to capitalism and imperialism; the very foundations of capitalism, colonialism and state violence are structured in conjunction with and through patriarchy."

She was suggesting that the racial divide among civil rights groups very often proves to be the point of contention that splinters these groups into opposing factions aimed at separate goals, when the main and common goal should always be to end the patriarchy. But if we can be successful in reimagining feminism, then I hope that it is also possible to reimagine the patriarchy — so as not to end it totally, but rather to first deconstruct it and then cleanse it at its very roots... to rid it of its corruption and thereby transform it into a force which can work in harmony with the matriarchy instead of in direct (and too often deadly) opposition. And I believe that working on our perception of masculinity, on reinventing it as a much more inclusive construct that lives in conjunction with femininity, is one step towards that common end-goal.

And so, I apologize in advance for the quality of these photos being similar to that of #thedress — but, unlike with that whole debacle, I have added both pictures of and links to the items on their respective stores' websites, and also included prices, because those are important for some of us broker folks. Don't worry, I got you.

So, of course I bought this one. Duh. Less than $30 and it really accentuates the shoulders well. Also, black has been my go-to color these past few months. Sleek, refined, and classic.

If half my closet wasn't already overflowing with joggers, these would have definitely gone home with me. (And possibly would have lasted less months than I can count on my fingers — but they are a bargain, after all.)

I LOVED these, and I am seriously debating going back and buying them (after my next paycheck comes through) — the drop crotch and the paper boy pattern just get me.

Just one question: Who wore it better?

If I could actually afford this piece, I'd be breaking necks all over the city this summer...

So, sad story short: When I inquired about this item, the sale associate informed me that they regrettably did not have the item in an XL as I was hoping for. Based on the cut, I would have definitely needed that extra room in the neck and sleeves. But just try to imagine how cute I would look in sheer gold!

I just had to say "yes" to this dress! I still don't know if I really pulled it off, but it was just so pretty I couldn't resist. (Side bar: I blame my mother for my shopping habits.)

Why are you chuckling, though? If I am able to somehow find this in my size, all the little princesses wobblying their way up and down the aisles of the movie theater on their 1-inch heels when Frozen 2 finally comes out — eeek! — won't know what hit them. (Also, almost $100? That's Disney trying to keep up with Michael Kors, or...?)

More like this
The 5 Best Underwear For Preventing Wedgies
By Lisa Fogarty
Most Comfortable Underwear For Big Butts
By Audrey Williams
42 Black Owned Fashion & Beauty Brands To Support Today & Always
By Mekita Rivas, Shea Simmons, Kui Mwai and Dominique Norman
Ear Cuffs Are The No-Piercing-Required Way To Play With Your Style
By Carolyn Steber
Get Even More From Bustle — Sign Up For The Newsletter