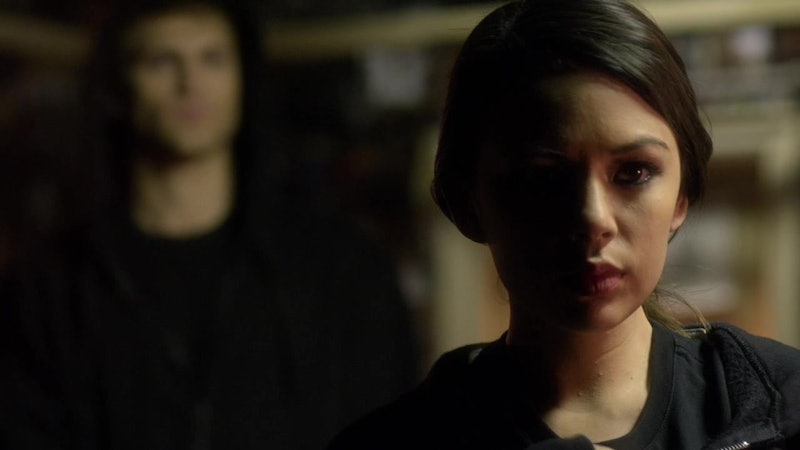 Once you start watching Pretty Little Liars, you’re immediately hooked. When you're not tuning into the show, you're either theorizing, looking at other people's theories, worrying about your favorite characters, or reading up on any clues you might have missed in the most recent episode. So it makes sense that the central mystery of Pretty Little Liars, figuring out who Big A is, can completely take over your brain. But sometimes, it goes even further than that. I can't be the only fan who's stopped and wondered, "Am I A?" ... Right?

Let me set the scene. This past December, I was sick for a few days, confined to bed with nothing to do. I decided to watch Pretty Little Liars and within three weeks I made it through all 109 episodes, just in time to jump right into Season 5B with "Fresh Meat." During that extent lounging horizontally, I spent more time in Rosewood than the real world. For three weeks, only two thoughts crossed my mind. One was what I should order for dinner from my sickbed each night. The other: Who is A????

By the time my binge ended, I had come up with a terrifying theory.

Then, as I began to find more of the fandom online, I realized that I wasn't the only fan who had this fear, thanks to Tumblr user urawkwardxx.

How exactly did we get here? Here are the 11 stages that PLL fans go through as they begin to wonder if they are the infamous A.

It's the end of the first episode of Pretty Little Liars; your life has changed but you don't know it yet. As the girls get that first text outside of Alison's "funeral," the wheels start turning. Alison has to be A, right? She's alive? But they just buried her! It must be someone else, A could be for anonymous, after all...

2. Certainty: [Insert Your Theory Here] Is Obviously A

Everyone has their first. For me, it was Jenna. For a while at the beginning of the first season I was convinced she was A, and couldn't imagine how everyone else didn't see it. Maybe for you it was Toby or Noel Kahn, or a total wildcard. But we all eased our nerves by strongly believing in a theory.

3. Embarrassment: OK, They Are Not A

And soon after your first theory comes the first time you realize how wrong you were. It's a valuable lesson all PLL fans must learn: nothing is ever certain (as we'd soon learn, not even death).

4. Fear: A Does Not Mess Around

The further you get into PLL,the more afraid you become of A. They're willing to do anything — A has no line. Quickly, the need to discover their identity becomes a necessity out of fear, not just a mystery you're curious about.

5. Protective: How Dare A Mess With Your Precious Liars

By the end of the first season, you've grown to truly love the Liars, their significant others, and their families. Someone hurts any of them, they hurt you. Someone messes with your 'ship, you show no mercy. A has officially become your enemy and they must be stopped at all costs, no matter who they are.

7. Worry: The Feels Are Inescapable

With all of the emotions caused first by A in general, and then the big Mona reveal, by the beginning of Season 3, you're starting to feel like if someone could read your mind, they'd send you straight to Radley. You want to figure out who Red Coat is, help the Liars exact revenge, and eliminate anyone who stands in the way of their happiness — whoa! There are those feels again. Gotta keep everything in check.

8. Overwhelmed: So Many Questions

How many As are there? Will any 'ships make it to shore? What really happened to Ali? What's A's endgame? You fall asleep considering these questions and wake up with even more.

9. Paranoia: The Fall Of Ezra

When Ezra is revealed to be the latest Rosewood sketchball, you lose any trust you had left. Sure, he's not A, but he's been lying to Aria, and all of us, since the moment we first laid eyes on him. If he came that close to being A, it could really be anyone.

Wait. If it's not Ezra, or Shana, or Jenna, or Toby, or Mona, or Ali herself, who's left? Could it be me? Am I capable of this? I knew I had strong feelings, but how far would I go?

11. The Realization: You Fit The Profile

It all makes sense now. You were so worried about who A is, because you didn't want anyone to discover your secret. Who else could be using the Liars' secrets against them besides the person who watched them all unfold, scene by scene?

How did it happen? Somewhere between your addiction to the Liars' lives and betrayal over Mona, you snapped. You needed to be closer to the Pretty Little Liars action — what other choice did you have? If you hadn't yet reached this stage of fandom, I'm sorry to spoil it for you.

But the next time you're watching PLL, look around. Are you surrounded by dolls and live camera feeds? You just may be before the season ends.