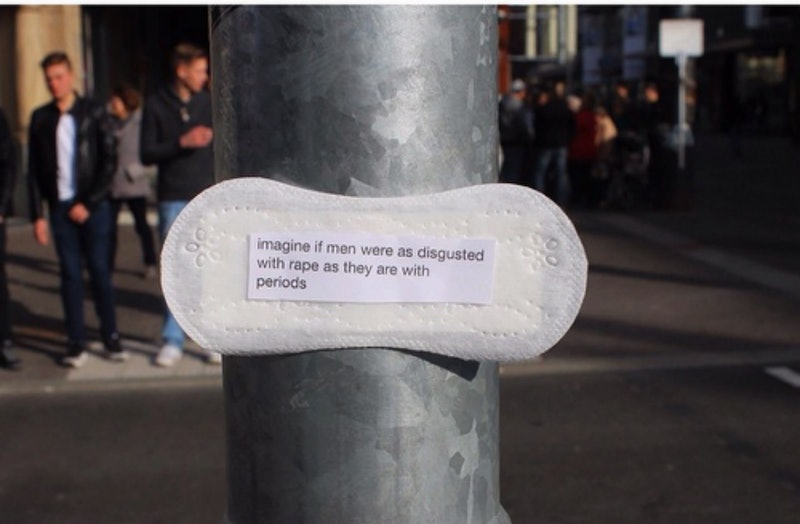 Truth: Graffiti is a time-honored tradition, dating all the way back to Ancient Greece. (Although I'm unconvinced what MTA calls scratiti—the physically engraved block letters as made in thick paint, usually reading some variation of a four-letter word—qualifies as dignified or reverent.) However, the practice's importance amps up in some cases—like when the person holding the can of spray paint has an inspired mission in mind. Street art, however, can (and increasingly often, does) extend way beyond the paint can: Elonë, a woman from Karlsruhe, Germany, is swapping out the paint for pads to make a point about feminism.

Elonë is printing out feminist and anti-rape messages, gluing them to pads, then sticking them all over her city. Messages include powerful thoughts like, "Imagine if men were as disgusted with rape as they are with periods." Also, think of the stealth facilitated by the menstrual pad's already adhesive surface. Slap and go! It oughta stick right away. Genius, really. She posted a photo from her project on Tumblr just this past Sunday where it has since gained over 200,000 favorites and reblogs. Elonë's messages appear in both German and English and now decorate a number of public places in Karlsruhe. "I'm not sure if it's illegal," she wrote on Instagram. "But seriously I don't care [because] they are easy to [take] off, haha."

The blurry image on the left reads: "My pussy, my choice." It also features a cartoon image of a cat head because, obviously.

Since she's is a woman and the internet does not always take kindly to women, ya know, saying things, Elonë has predictably found herself subject to some backlash about her project. Despite the haters, Elonë (who also regularly donates menstrual products to a local homeless shelter) asks others who'd like to copy and spread the message to do so and tag it but make sure their efforts promote equality among all genders (i.e., no dude-bashing).