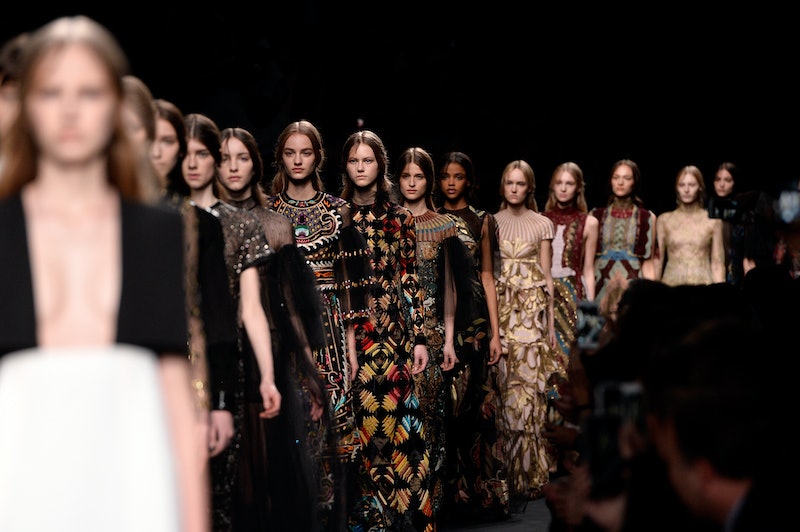 As the last stop in a month-long whirl of fashion shows, Paris debatably holds some of the most exciting presentations. On the one hand, its lineup features shows from the famed historic houses (Chanel, Dior, Saint Laurent) of fashion history. And on the other hand (in what can be considered a case of amnesia), sartorial enthusiasts forget what they’ve seen in the fashion weeks prior to Paris and welcome what comes down the runway with a fresh perspective. I think its appeal lies in both, but regardless, Paris Fashion Week, which is coming to a wrap as this post is published, brought some unexpected trends out of the woodwork. I’ve spent the last couple of days intently clicking through the shows' web videos to observe what’s new and different from New York, London and Milan.

As expected, seventies nostalgia was in full effect in Paris, from bohemian dresses fit for Stevie Nicks at Chloé to stiff collars and zigzag prints at Giambattista Valli. But there were some breaths of fresh air from the strict retro look, like considerably less denim-on-denim than there was in other cities. Also, some offshoots of seventies stylings, like patchwork patterns at Chloé and quilt-like capes at Céline, hinted at hippie fashion without blatantly recalling decades past.

Speaking of Céline, Phoebe Philo revamped the minimalist ethos that her collections are known for in two cool ways. First, she took classic animal prints and juxtaposed them against each other like she did with this jacket and added the zoo accents into handbag straps and shirt sleeves. She also designed a few looks (gaucho pants, a knee-length dress, and fur-trimmed jacket) in an embellished floral pattern that at first glance (and from a computer screen) is hard to decipher — is it a floral or abstract print? A bold black-and-white color scheme unexpectedly popped up at other Paris shows, like at Emanuel Ungaro, where the fall 2015 collection was almost exclusively black, white and polka-dotted. Similar to Céline and Ungaro, the first few looks at Valentino were black and white and heavy on the graphic print.

The light and dark juxtaposition was significantly different from other color schemes that popped up throughout the week. Possibly in tune with the seventies theme, browns and other earthy shades made a big appearance, like at Lemaire and Rochas. That, along with burnt yellows and oranges (seen at Maison Margiela), along with maroon, reminded me of the costume design for Argo and American Hustle, both of which take place in a very 1970s setting.

Just like we knew there’d be seventies shapes in Paris, we knew there’d be fur, which hit the runways and the street in a big way over the past month. Paris showed fur in interesting places, although luxe coats and vests were just as common as they were in other cities. It was as though a designer took a piece of fur and in a game of pin the tail on the donkey, attached it at random to a given garment. For example, the pointy, fur-embellished flats at Balenciaga. Not to mention, John Galliano took the fuzzy feet look to a new level with fur-covered shoes at Maison Margiela. It reminded me of a moccasin, albeit a very luxurious and elegant one. Furry flats and heels were noticeably different from the skin-tight boots that are decided trend for fall 2015 — from thigh-high vinyl ones at Dior to mid-calf velvet ones seen at Dries Van Noten.

The Dries Van Noten show at the start of the week displayed some of the most innovative takes on the season’s trends. Mixing and matching prints à la Jenna Lyons and her J. Crew styling team was a big hit at a lot of shows, but Dries Van Noten’s interpretation of the mixed media look was by far the most sensory-pleasing. Each look was a melting pot of fur, khaki, metallics, brocade and leather, to name a few. His aesthetic also gave an original spin to the layering trend, especially that of a shirt or long tunic worn over pants. Not only were the pieces being layered of different patterns, but of various textures as well.

The Dries Van Noten show revealed another unexpected trend coming out of Paris Fashion Week — the neck garment. Neither a necklace, scarf nor tie, the neck garment resembles a leftover piece of fabric from a collection, thrown on to complete the look (which it does). Peter Dundas unveiled it for his last Pucci collection in Milan, but it was more prevalent in Paris. Dries Van Noten capped many of his looks with floral ones of various color schemes, as did Galliano at Margiela. Alexander Wang did his own take at Balenciaga with motorcycle buckles. The embellishment is definitely superfluous but in a fun, “why not?” kind of way. A cousin of the neck garment is the shirt collar, whose varying shapes were a noticeable trend in each city. Sharp, triangular collars were common on a lot of runways, but Rei Kawakubo did a classically cool sailor collar for Comme des Garcons secondary line CdG. It seemed like a revolt from the intense seventies collars and fitted shirts seen elsewhere.

The onset of trends, both new and recycled, that came out of Paris Fashion Week is a testament to the fact that right now in fashion, anything goes. For every shoe-pant there was a flat and for every gaucho there was a slim leg. No matter which collar you choose, the end of fashion month means that the arsenal of ways to express yourself has only grown larger. And, we now know when to expect Zoolander 2.