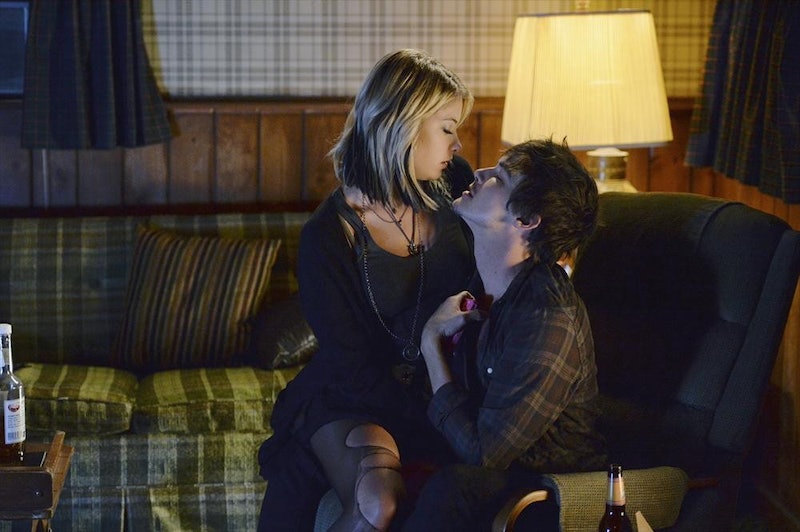 The identity of Big A might be Pretty Little Liars' major mystery, but that doesn't mean it's the only thing fans care about. For every A clue we scramble to decipher, there is a romantic scene between our favorite 'ship that we want to rewatch on loop. However, the two things are tied very closely together, as A is constantly trying to sabotage the Liars' relationships. But that just gives you even more of a reason to fight for your OTP. Of course, that means anyone who 'ships Hanna and Caleb on Pretty Little Liars has gone through a few battles, because once you climb aboard the SS Haleb, you've set sail for life.

From the very first season of PLL, it was clear that Hanna and Caleb were something special. Their characters didn't fall into any romantic tropes, and you could practically feel the chemistry between actors Ashley Benson and Tyler Blackburn. But as quickly as Haleb rose to the top of your 'shipping list, they faced trouble, thanks to Caleb's secret deal with Jenna, Mona's interference, and some heartbreaking shared glances.

Yet here we are, four seasons later and Haleb is currently the most stable 'ship on PLL, having bounced back from Caleb's time in Ravenswood to become stronger than ever before. But 'shippers have learned and been through a lot since the first time we saw the mysterious hacker hanging around Rosewood High. Here are the 11 struggles all Haleb fans know to be true.

Constantly Worrying That A Will Break Them Up

Basically, from the moment an episode of PLL ends, to the moment the next one begins, you are worrying about the future of Haleb. Sure, they ended on a strong note last week, but anything can happen in the next episode. What if A really ups their sabotage game? What if Hanna tells one too many lies? If I'm not currently watching Hanna or Caleb on my TV, I'm worrying about them.

Or Even Worse — That They Break Up Without Any A Interference

I don't even want to talk about this. The thought of Haleb splitting completely of their own accord, without any help from A, is almost unfathomable. It's essentially impossible, but that doesn't stop fans from worrying about it every so often.

Getting Lost In Gif Sets For Hours

Wait, what time is it? How long have I been staring at this moving grid of Hanna and Caleb's best kisses? Was I supposed to go to work today??

And Staying Up Too Late Watching Fan Videos

I mean, I could go to bed and get something at least close to eight hours of sleep, or I could watch Hanna and Caleb fall in love for 22 minutes. Might as well start the video while I decide.

The Lack Of Fan Fiction

This one falls directly on us 'shippers. What's with the lack of Haleb fan fic out there? They may not have the forbidden factor of Ezria or Scrabble foreplay of Spoby, but that doesn't make them any less hot. (We all saw that dressing room scene, right?) Maybe there's some sort of schedule we can come up with. I can commit to one chapter per week, rating TBD.

Knowing That Your Camping Trips Will Never Live Up To Theirs

Unless you start sharing your biggest secrets with the gorgeous but troubled guy who's been hiding in your basement in front of a fire and find yourself heating up the tent afterwards, your trip can't even hold a candle to the one we saw in "A Person Of Interest."

The Chance That One Of Them Is A

The theory of Hanna being Big A is pretty popular right now, and there are people out there who think Caleb could be the head hoodie. Both of these possibilities are terrifying to Haleb 'shippers. There's only one thing that would make this possible to handle: Hanna and Caleb working together as A. They are the definition of Ride or Die, so if one of them is A, the other should at least be on the A team.

Dealing With The Abandonment Issues

Caleb has left Hanna, and us, a lot over the course of PLL. Luckily, he's come back (better than ever) every time, but 'shippers have become so emotionally invested in this pair, watching him leave breaks our hearts too. Hopefully he'll stay in Rosewood for good this time, or at least long enough to let us recover from his last departure.

Having To Explain Why Nov. 5 Is Your Favorite Date

There was an exclamation point!

Haleb's chemistry has to translate to their real-life counterparts, right? I mean, you can only fake so much. Plus, they've both posted Instagram photos that suggest an actual Tyshley romance isn't exactly impossible.

Comparing All Of Your Own Relationships To Haleb

Because no matter how great your significant other is, no couple will ever live up to Haleb. They're OTP.