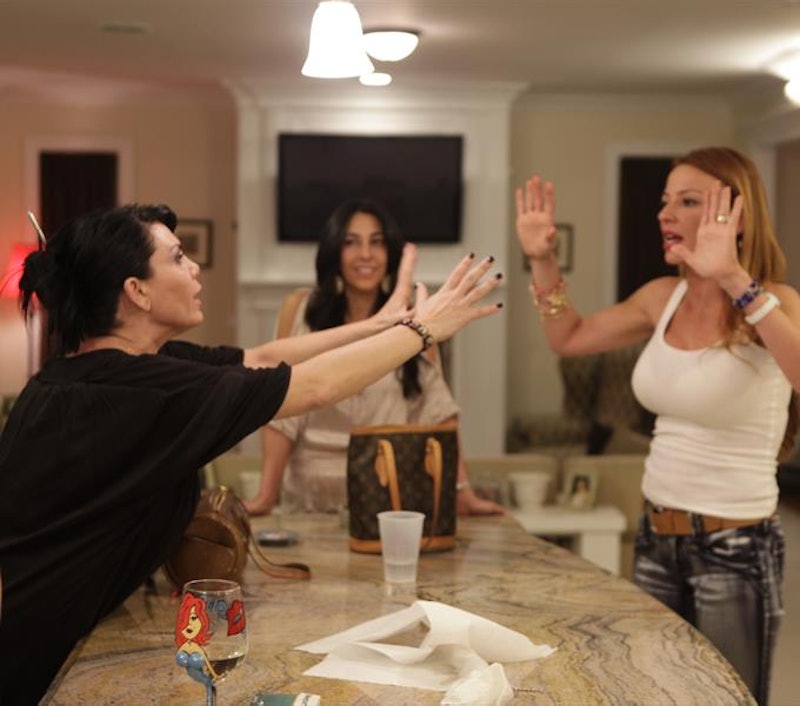 There are still a half-dozen Real Housewives series on Bravo, and The Bachelor is always good for a few weeks of craziness, but most of the drama has gone out of reality and into everything written by Shonda Rhimes. However, there is one notable exception: Mob Wives. But will there be a Mob Wives Season 6? Season 5 is coming to an explosive end, with a finale and reunion that will feature physical fights and a rivalry that boils down to two women fighting because their fathers-in-law literally killed one another. If there's anything that could guarantee a season renewal, it should be that.

There's still no news from VH1 about whether or not Mob Wives will return, though I don't see why they wouldn't want to stay in the business of hanging out with the Wives. Sure, it comes with some safety concerns, like flying glass and the chance of significant emotional duress from listening to that much screaming, but isn't the risk worth the reward? It can't be that expensive, either — these women generate all of the drama themselves. No expensive trips are needed to start a wild fight between these gals, just crack open a few bottles of red wine and watch them explode at one another.

But VH1 might change their tune if they hear a little gossip that's been going around. Former Mob Wife Carla Facciolo, who was a cast member back in the first season, said in an interview with Vh1 that she wants to return to the show and what the fans want is to see the original ladies... plus Ang. "Well it would have to be the main four of us because we started that show, we are the originals. That’s all you hear is, ‘We want the originals back on the show.’ And then they’ll go, ‘Ok and Ang too,’ because everyone loves Ang," Facciolo said. "I would even bring back Ramona because she just fits in with our crew, because she grew up with everyone." Soooo... basically the whole cast minus the feuding Natalies and Alicia.

While she's not totally wrong — the rest of the first season ladies would make for great additions — it does sound like she's angling for a better contract. But that doesn't even matter if she's able to gather all the ladies from Season 1 and make this happen. Finding out what they've been up to would make for a great Season 6, as would getting them all into one room again.