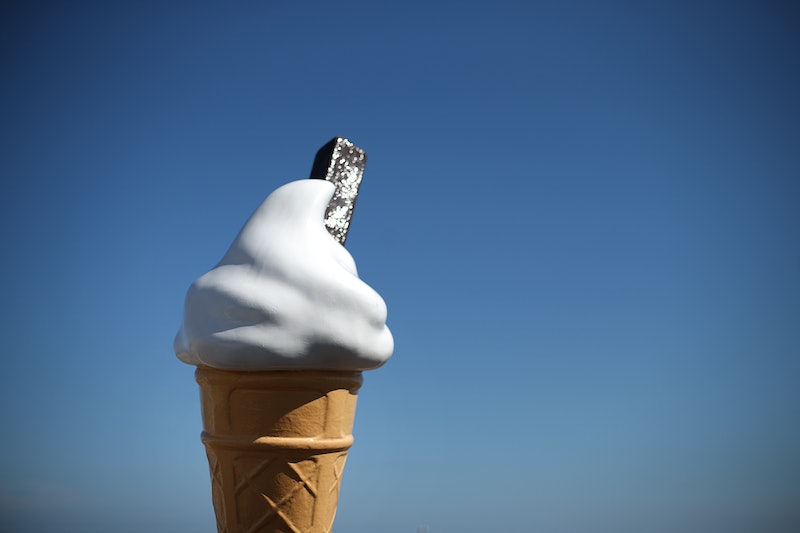 It's OK, sometimes I can't remember all of the places the liars' lives have been threatened by A. Honestly, it took me a second to remember this particular place during Tuesday night's episode of Pretty Little Liars. But, at the very least, now this all makes a little bit more sense. In the final moments of "The Melody Lingered On," we saw a screwdriver from Boo Boo's Ice Cream on PLL getting studied in a lab — probably for evidence of Mona's murder, it was found in her house, after all. So, you're probably wondering what Boo Boo's Ice Cream is or where it is or whether or not it's existed in Rosewood this entire time and you just never noticed it (cough, OUAT). Well, we've got your answer.

Let's get back to all of the places A has tried to dispose of one or more of the liars in an episode. (Does anyone have a master list? That thing has to be at least 50 pages long.) Earlier in Season 5, the liars went to Boo Boos ice cream factory (which is conveniently abandoned) while following the tracking signal on Mona's laptop. It was there that Aria and Spencer almost became ice cream — yes, A locked them in a freezer and they almost literally became ice cream. One of the more creative almost-deaths PLL has dished out over the years (pun intended). But anyway, if you thought this was a random, new clue — think again.

Since we already visited the factory on the series, there are a few possible explanations for this. The first, obviously, is that A is still hanging out there OR that A has been hanging out there since before Mona's murder. Is this foreshadowing of another trip to the factory? I mean, there has to be more to find there if A or one of A's minions was carting around some branded cutlery from the place. NOTHING on PLL is a coincidence, so I'm not about to let this screwdriver go as just a random, unplanned act on A's part — A would never do that. It's possible that the return of Boo Boo's to the series means that the liars have to take another trip — possibly the trip that will feature the Big A Reveal — to the abandoned factory. Who knows, maybe another freezer in that place has been preserving Mona's body? Because no one's really convinced that she's in that barrel, right?

More like this
Michael & Kathleen Peterson’s House From ‘The Staircase’ Has New Owners
By Kadin Burnett and Kayla Blanton
Will Vampire In The Garden Get A Season 2? What To Know
By Kadin Burnett
'Bridgerton' Star Nicola Coughlan Confirms Season 3 Will Focus On Colin & Penelope
By Grace Wehniainen and Alyssa Lapid
'Bridgerton' Season 4 Will Likely Focus On This Brother's Divided Heart
By Grace Wehniainen and Alyssa Lapid
Get Even More From Bustle — Sign Up For The Newsletter