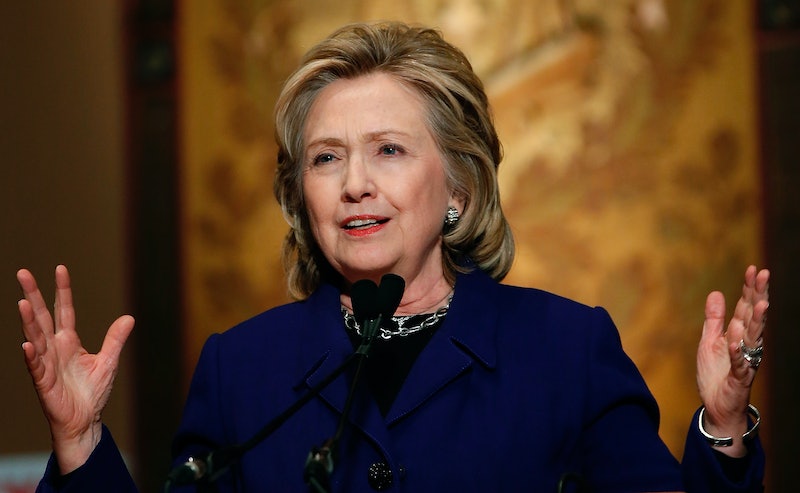 As many of us know, instead of using an official State Department email, Hillary Clinton used a private email account while she served as Secretary of State. Putting aside the legalities and ethics of the situation, how long until Clinton's emails are released to the public? During a press conference, State Department spokesperson Jen Psaki said that it'll be "several months."

On March 4, Clinton tweeted: "I want the public to see my email. I asked State to release them. They said they will review them for release as soon as possible." So, this review process is what is going to take up the most time, and "as soon as possible" might not as soon as many would like. Psaki said there is a certain procedure involved in an email release:

Obviously 55,000 documents is quite a few. We are also going to be releasing in advance — so two tranches, one is the larger tranche and the first will be the documents that have already given to the select committee several weeks ago, those are 300 e-mails, about 900 pages and those will be made publicly available — after a review.

But in terms of the time frame for the review, a few months is a just a rough estimate. Let's look at the realities of the situation, something the State Department alluded to:

Of course it will take some time as you referenced because it is quite a few pages and we need to go through and review with FOIA [Freedom of Information Act] standards, to make sure redactions that need to be are put into place.

Somebody with a high quality black marker will be combing through all of the emails, redacting any sensitive information. Last year, there were 19,000 FOIA requests, and according to State Department spokesman Alec Gerlach, they are handled "first in, first out." Which means we could be waiting even longer, depending on previous requests, though there is some hope they might be released sooner rather than later, as the department does consider "the complexity of the request."

On Wednesday, the Associated Press made the first legal move to obtaining these emails, filing a lawsuit against the State Department as previous FOIA requests for her emails remain unfulfilled. Maybe that will speed things up?

In the meantime, a few months might seem like a long time to the public anxiously awaiting the email release, but it will feel a lot longer to the folks at the State Department. My sympathy is with whoever will be tasked with blacking out 55,000 documents.