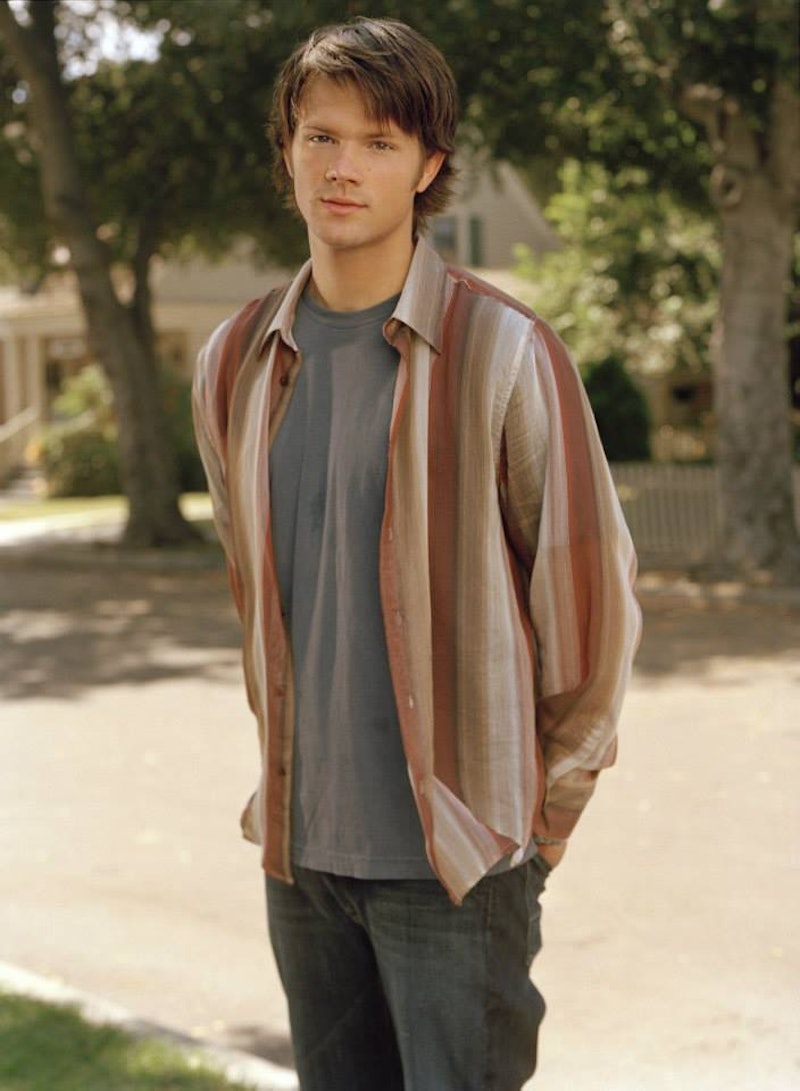 Were you Team Dean, Team Jess, or Team Logan? Those are the three names Gilmore Girls fans can't help but utter, not to mention the three men who start arguments about who Rory Gilmore should have ended up with (that is if you didn't think she should be by herself and follow her dreams). Well, Jared Padalecki, aka Dean Forester, is contributing to the conversation by revealing which team he's on.

No surprise here, but Padalecki is Team Dean. Seeing as he played the either loved or hated character for over 60 episodes, it makes sense that he'd show Rory's first love some support. In an interview with People, Padalecki said,

I'm so Team Dean! Biased or not, I'm totally Team Dean. I do love Milo [Ventimiglia, who played Jess], though, and I think I'm hopefully going to see him this summer. There's a Gilmore Girls reunion happening at the ATX Television Festival, and I would love to be a part of it if I'm invited. They didn't invite me yet, so, hopefully I can go. I always think Dean is a good guy — a little simple around the edges — but he was a kid! I'm not gonna hold it against him.

FYI, Padalecki shared on Facebook after the interview that he will be part of the Gilmore Girls reunion.

Thanks to JarPad, I can't help but think what a Dean and Jess friendship would be like. There's no doubt that the two despised one another and not just because they both loved Rory. So, let's have some fun and imagine what it would have been like if Dean and Jess actually got along.

They'd Look Out For Rory

First and foremost, and most obviously, Dean and Jess would protect Rory no matter what. At least that's one thing the two had in common when they weren't acting immature.

These two loved to argue with one another. So, as most friends do, Dean and Jess would fight about silly things, including that Jess prefers Dean's hair long, not short, and the fact that Dean doesn't want his BFF to move to California.

As we all know, Jess loved to read (just like Rory). Dean? Not so much. So, Jess would encourage his bestie to read by providing him a list of his favorite books. Do you think they'd have a book club?

They'd Bond Over Rory's Grandparents Not Liking Them

Who did Richard and Emily really like? Well, we know they didn't like Jess or Dean. Yep, just another thing these two could bond over.

Dean Would Give Jess Car Tips

Seeing as Dean built Rory a car (yes, the one Jess crashed), Dean could give Jess some pointers on how to actually take care of a car, especially when your uncle "steals" it and hides it from you.

Did you ever notice that Jess and Dean wore some fantastic coats? They were perfect for all seasons, which means they'd definitely swap jackets here and there. However, seeing as Dean is a giant, and Jess is not, well, they'd might not be able to share. Damn. I guess they'll just have to go shopping together or share style tips.

They'd Teach One Another How Not To Be A Jerk

Ever notice how Jess and Dean (and Logan too) were sometimes jerks? As friends, they could learn from one another about how to not be total idiots. For example, Jess would tell Dean not to sleep with Rory while he's still married. Also, Dean would tell Jess to not just leave without even a word.

There you have it: a Dean/Jess friendship. It would have never worked out on Gilmore Girls, but, hey, it's fun to reminisce about this show fans will always love.

More like this
Twitter Is Unravelling Over Wolverine’s Return For 'Deadpool 3'
By Darshita Goyal
Nicola Coughlan Shared A Lady Whistledown Excerpt From ‘Bridgerton’ Season 3
By Grace Wehniainen, Alyssa Lapid and Sam Ramsden
Everything To Know About 'The Last Of Us' TV Adaptation
By Sophie McEvoy and Radhika Menon
A New 'And Just Like That' Table Read Pic Confirms A Key Character's Return
By Jack Irvin and Grace Wehniainen
Get Even More From Bustle — Sign Up For The Newsletter