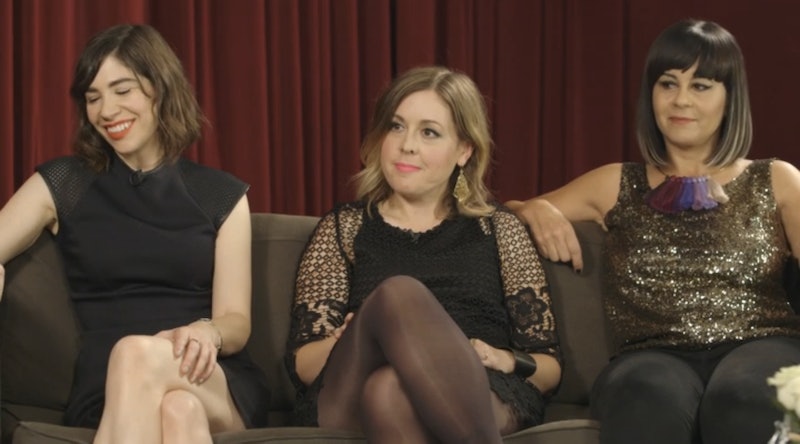 Vanessa Bayer is probably best known as a cast member of Saturday Night Live, but the actress also flexes her comedic muscles on IFC’s Comedy Crib playing a terrible albeit side-splitting media coach named Janessa Slater. Offering misguided wisdom to help bands realize their full potential, Slater invited Sleater-Kinney to talk feminism on her show Sound Advice. It is, without contest, one of the most painful displays of a willfully ignorant person trying to explain women’s liberation. It’s also a testament to the patience of the group’s Carrie Brownstein, whose skits on Portlandia stand in stark contrast to her exchanges with Slater.

Sleater-Kinney’s most recent album No Cities to Love (following a decade-long hiatus) hit the stands and became an immediate critical darling, with Pitchfork dubbing it “best new music” and Rolling Stone’s beloved Rob Sheffield writing that, “Once you get over your shock that this album exists, it comes on like one of their toughest ever – 10 songs in 33 minutes, not a dud in the bunch, all surging in uptempo stomp-down-the-door mode.”

Enter Janessa Slater to offer her critique (“Did you all meet because you were all on low budget TV shows that I’ve never seen?”), and school them on her own questionable identity as a pioneer for feminism. For their part, Sleater-Kinney respond to the best of their ability while maintaining some semblance of patience. Below, four of their best retorts.

On the Riot Grrrl movement:

In a long-winded explainer of Susan B. Anthony and her purported femininity that has no apparent connection to the interview, Slater remarks, “We’re all just little riot grrrls.”

“I feel like your understanding of ‘riot grrrl’ is vague at best,” remarks Brownstein. Corin Tucker jumps in to add, “It was a movement of activists who did events, played music, made art, to talk about violence against women.”

And it had absolutely nothing to do with, as Slater had mentioned, “women looking pretty.”

Obviously, Slater like, totally gets it. Because the riot grrrl movement is about how men should “treat women nicely,” “treat them to dinners.” And in return? Women need only give them a peck on the cheek, or maybe like, “an extra-long hug.”

Their silent blank stares say all we need to know.

So if a woman were to flash her ex-husband while he’s at dinner with the new apple of his eye, asks Slater earnestly, would that be a crime? It’s not, right? Because “feminism.”

“I think indecent exposure is a crime,” says Brownstein. “I think if you’re in public it’s considered indecent. And if it was at his house, then it was harassment.” Ugh.

“One of my favorite bands of all time is an all-girl band,” says Slater.

“Usually we don’t put the modifier in front of ‘band,’” responds Brownstein. Would you call a group of men a “male band?” No, you wouldn’t.