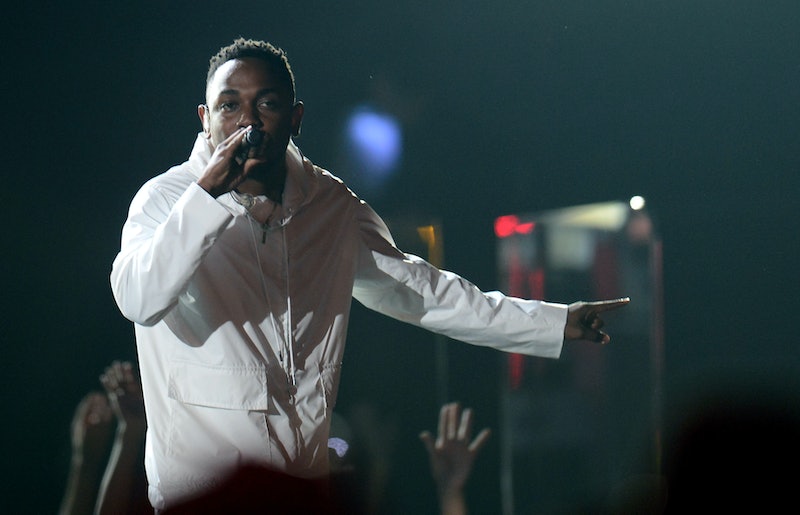 Kendrick Lamar's new album is dropping on March 23, which still isn't soon enough. But at least now we know its title and its cover. On Wednesday night, Lamar posted an Instagram photo of the album art with the caption,"Don't all dogs go to heaven? Don't Gangsta's boogie? Do owl shit stank? Lions, Tigers & Bears. But TO PIMP A BUTTERFLY. Its the American dream n****....' - lil Homie." Rolling Stone confirmed that To Pimp a Butterfly is the title of K Dot's new album, and it's just another reason we're so ready for it.

What's most exciting about To Pimp A Butterfly is its energy. Lamar said in Rolling Stone that To Pimp A Butterfly is going to be "honest, fearful and unapologetic." Of the album's punch of a title, which, according to Rolling Stone, is a play on Harper Lee's seminal novel To Kill a Mockingbird: "That's something that will be a phrase forever. It'll be taught in college courses — I truly believe that." From the songs he's dropped already — "i," "The Blacker The Berry,"and the untitled song he performed on The Colbert Report — it's clear that Lamar is mad as hell, and he's not gonna hide it. That's power.

The most buzz, though, surrounds how To Pimp A Butterfly is going to be an aggressively political album. Justin Charity from Complex called To Pimp A Butterfly "the blackest album since Watch The Throne," and went on to say "With 'i,' [Lamar] recommitted himself to theories of self-esteem, black transcendence, and such. With 'The Blacker the Berry,' he's confirmed that these themes are his priorities and, overall, his new mission."

To Pimp A Butterfly is inspired by the explosion of racial tensions in America illustrated by the cop-killings of black men such as Trayvon Martin, Michael Brown and Eric Garner. On "The Blacker The Berry," Lamar aggressively addresses the vitriol that charges racism: "You hate me, don't you? You hate my people, your plan is to terminate my culture." It's anger, but it's also a call for a response.

And that power is coupled with a strong new sound. When he performed his untitled track on Colbert (where Stephen called him "one of the best rappers in the world," he opened with a spoken-word intro and had guests Bilal and Thundercat on the track, as well as a female back-up singer. It starts smooth, and builds to a thunderous, impossible to ignore crescendo about Lamar's relationship with race and identity and religion. It's also pretty jazzy. That's heavy stuff, but Lamar isn't a lightweight.

And speaking of performing — damn, have you seen K Dot perform? It's a more superficial and selfish reason to be pumped for To Pimp A Butterfly, but the fact remains that his album inevitably means more incredible shows like his performance at the 2014 Grammys with Imagine Dragons, or on Saturday Night Live in fall of 2014.

To Pimp A Butterfly, even before it's release, is wholly transgressive and of the moment, dealing with an ugly cultural and political atmosphere that is fraught with racial tension. If there's anyone that can tackle that raw emotional anger, it's our man Lamar. It's bound to cause controversy, but isn't that the point? I wish we could time-hop to March 23.

More like this
The 'It's A Sin' Creator Revealed A Massive Detail That Didn't Make The Final Cut
By El Hunt
Harry Styles Called For "Backlash" In Powerful Statement On Abortion Rights
By El Hunt
Twitter Was Saying The Same Thing About Sam Ryder’s Surprising Eurovision Result
By El Hunt
Britney Spears Met The Weeknd & Sam Levinson, So She May Actually Be On 'The Idol'
By Jake Viswanath
Get Even More From Bustle — Sign Up For The Newsletter