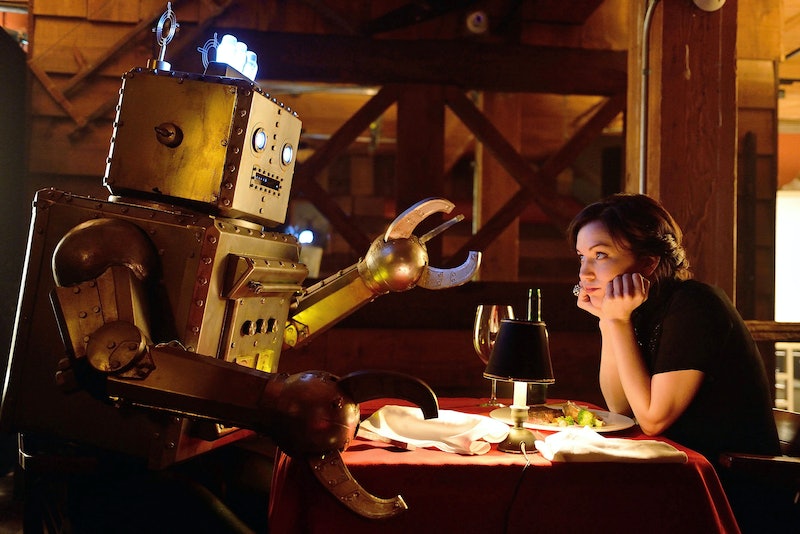 The roles are reversed on Wednesday's Man Seeking Woman when Liz, Josh's voice-of-reason sister, goes through a break-up of her own and finds herself starting from scratch in the dating world. Fun. The show, which usually revolves around Josh's (played by Jay Baruchel) love life, gets a makeover for a very "Woman Seeking Man" episode written by one of the show's writers Sophia Alvarez. "That was a Day One idea," Alvarez tells Bustle, "Simon [Rich, show creator] always wanted to do a 'Woman Seeking Man.'"

The episode focuses entirely on Liz's newfound single life, which actress Britt Lower loved. "It was super exciting to get to be from the main character point-of-view," Lower tells Bustle in an interview. "I thought Sophia and Simon did such a great job capturing not only a female perspective, but specifically Liz's." Liz, who usually has a more "grounded point-of-view" in comparison to Josh's best friend Mike's "wacky" POV (played by Eric Andre), gets to take a trip down Bizarre Dating Lane which involves dating a robot, creating the "perfect man," and being judged by a bunch of engaged or married second graders.

In the episode, Liz meets with a group of second-graders who are absolutely shocked to find a 29-year-old woman single. "Even if you don't believe it personally or intellectually that there is a timeline you have to follow, you always hear women talk about their timeline and when they're going to do certain things," Alvarez says of the scene. "I'm only 30 now, but looking back thinking about being 24 and worrying about that type of stuff seems so ridiculous to me now, but it's very real at the time."

"Liz in that scene is even like, 'This is insane, I'm not going to get pressured by these 7-year-olds,'" Lower says of the absurdity of the tea party scene. "I think it highlights how absurd it is that one would need to focus so early on these external factors." Luckily, living up to a certain timeline is becoming a thing of the past. "I think more and more that there's this idea that women can have children later in life and get married at whatever time they want to," Lower says of the current times versus the pressures that women might have at one time faced.

"Instead of listening to [Liz'z] inner compass, which is telling her to take some time off and focus on herself for a while, she falls prey to feeling like she is missing out on something," Lower says of Liz's immediate jump back into the dating scene. "I think, more so than men, females feel the pressure to have things in line more quickly, even though that may not be what they want."

Man Seeking Woman is a show all about dating and the peaks and valleys that come with that. For years, dating was a pretty familiar script, but with the growing mainstream feminist movement — that we love — has the dating game changed at all? Lower admires shows that have become a voice for women dating in a feminist world.

"I look at shows like Broad City and Girls, and I'm so excited that there's finally a strong comedic voice for women to stand out and say, 'This is my experience of what dating is like,'" Lower says. She also points out that shows like Broad City and Girls are "universal," in which the audience can identify to either the male or female characters, despite their gender. She hopes the same can be said about the "Woman Seeking Man" episode of Man Seeking Woman, as dating is a "pretty human experience."

So can we expect more of a female-perspective on Man Seeking Woman? "I think so," Alvarez says. "I think as we grow with the show, we're going to see more from Liz. And if Josh were to be in another relationship with another girl (who is around for more than a one episode arc), hopefully we would see from her too."

Lower is also hopefully of another Liz-centric episode on the show. "I wouldn't be surprised if we got to do this again," she tells me. Let's hope so.

More like this
Thank U, Ex
By Rosemary Donahue
Kelly Osbourne Found Love In Her Best Friend & Now They're Expecting
By Vivian Iroanya and Rachel Mantock
G Flip Shared How They Got Romantic With Chrishell Stause & Discussed Babies
By Brad Witter
Kevin Kreider Finally Asked Out Kim Lee On 'Bling Empire'
By Brad Witter
Get Even More From Bustle — Sign Up For The Newsletter