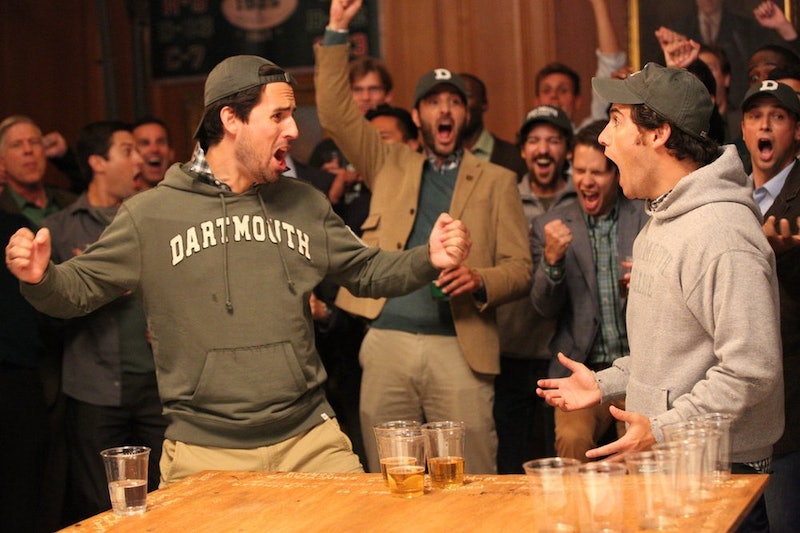 Fraternities have acquired a reputation for less-than-laudable activities. In the news, we largely see the more nefarious sides of frat life as brothers are exposed for hazing, sexual assault, and general intolerant and delinquent behavior. This gritty reality is not what is shown on screen: in shows like The Mindy Project, Pretty Little Liars, and Greek, we learn that fraternities and sororities are just cool, fun places to get drunk, use the WiFi, and look at photos of old alumni.

Movies present an even starker contrast to the reality of frat culture. From classics like Animal House, Accepted, and The House Bunny (yes, it's a classic) to less intellectual films like American Pie and Neighbors, fraternities are presented as bastions of brotherly love and mischief, where young men host toga parties filled with hot, willing girls and mess with each other all in the name of male bonding.

Some of the information we get about Greek life is definitely accurate — for the most part, the fraternity provides a home for dudes looking to make professional connections and bros for life, all while creating an atmosphere of fun and tradition. While it's a cliché, there's no phrase better than "work hard, play hard" to describe the typical American fraternity, no matter what tier they are.

With tales about the Sigma Alpha Epsilon fraternity house, commonly known as SAE, at the University of Oklahoma spreading like wildfire, anyone who hasn't been in one may be feeling a little out of the loop. What do people do in fraternities? What is their function, anyway? Are they any different from what I've seen in the movies? While the difference can be a little foggy, we're here to clear up the distinction once and for all between frat life on screen and on campus.

On campus: Pretty much the same. Since the drinking age increased to 21, dangerous drinking has been on the rise. Since kids can't go out to bars and drink legally in moderation, they are much more likely to binge drink in a frat house basement. There are a lot of things about Animal House that are unrealistic, but unless it's Dry Week — which is a part of pledging that only happens within sororities, actually, where the women pledging are not allowed to drink at parties all week — or you go to Dartmouth, this is actually the reality.

I don't know of a single frat, whether it's the most business-oriented or the most loosely academic, where alcohol doesn't play a huge role. While many fraternities don't condone drug use and will actually confront brothers who they suspect have a problem, others are well-known drug hubs. And while marijuana is the most common drug on campus, the presence of cocaine as a party drug is increasing.

What is there to do at a frat party if you don't drink or have friends in the house?

P.S.: Don't get too excited. "The DJ" is just a guy with an iPhone and a speaker.

On campus: Hazing is not this fun. Real-life hazing does have the Accepted-esque element of public humiliation, and, as is also represented in the movie, hazing typically involves some level of upperclassmen making freshmen do their dirty work for them — doing their homework, taking out their trash, doing their laundry. But real fraternity — and, at some colleges, sorority — hazing tends to have more to do with alcohol and physical pain than good-natured fun and hot dog costumes.

Again, some fraternities are worse than others when it comes to hazing pledges. In many frats, hazing rituals commonly involve forcing pledges to drink, which has led to several nationally publicized cases of students dying during these rituals. While only some fraternities use the outrageous tactics made famous, there is not a frat in the country that you can get into without some form of hazing.

Sex At The Frat Party

On campus: While some brothers go into parties thinking like this guy from American Pie, these expectations don't always fit reality. Plenty of happy hookups result from good Greek parties where students bond over Psych 101 or being from Connecticut or hating the cheap beer that seems to get everywhere during a frat party.

Across the country, students — mostly female — report (and, too often, don't report) being sexually assaulted at a frat house. Frat guys have created a whole vocabulary of words to talk about sex with dubious or nonexistent consent, which I will not repeat here.

Sexual assault on campus isn't exclusively a Greek problem; more and more frats are taking a stand against sexual assault.

Nevertheless, sexual assault is present in the Greek system — and that's something you'll never see on TV unless you watch Law & Order: Special Victims Unit or Criminal Minds.

On campus: This is not real. This would never happen, ever, even at the biggest party school in the country. However, this shot from Neighbors is definitely real:

On a Sunday morning during spring semester, this is inevitably what the whole block surrounding a frat house looks like — Solo cups crunching underfoot, beer cans wedged in the snow, and liquor bottles piling up (in a recycling bin if you're lucky).