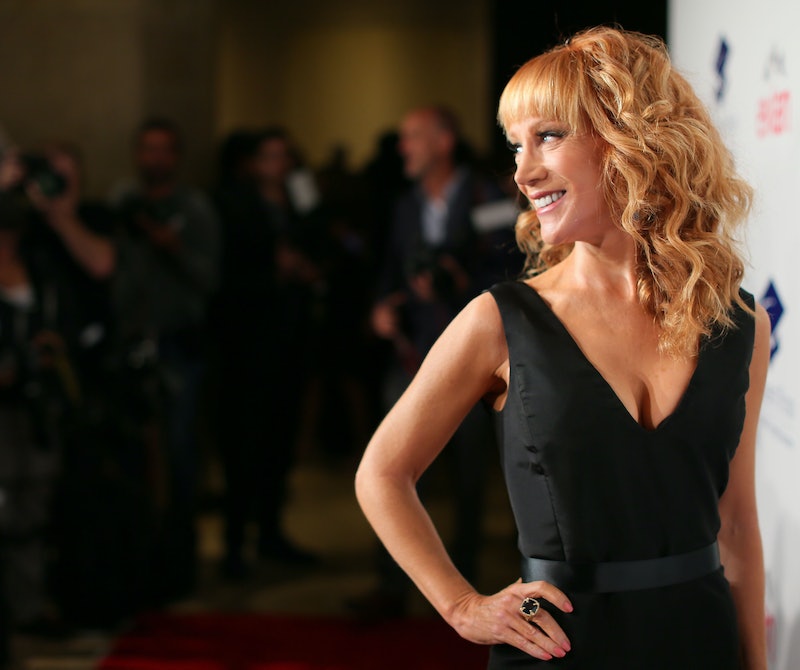 Remember the time Giuliana Rancic made that comment about Zendaya's hair on the red carpet at the Oscars? ICYMI, the 18-year old was wearing it in dreadlocks, and Rancic commented during a Fashion Police segment that the style made her feel like Zendaya smelled like "patchouli oil… or maybe weed." Super uncool and racially-charged thing to say about a person, and Rancic has deservedly taken a lot of heat for it. But even though she apologized to Zendaya weeks ago, and Zendaya issued her own brilliantly-worded statement in response, there was one person whom we hadn't heard from yet — Kathy Griffin. Griffin, of course, is Rancic's newly-appointed costar on Fashion Police (replacing the late Joan Rivers) and up until now, she's stayed silent on the gaffe. But now that she's speaking up, it just got a whoooooole lot shadier in here. Here's what Kathy Griffin had to say about Giuliana Rancic's comment when asked if she'd be in as much trouble if she'd made the joke instead:

Probably not. But I wouldn’t have said the joke in the first place. Some dude wrote it for her. Don’t have anyone write you jokes or even suggest jokes for you on ‘Fashion Police.’ You have enough great insider gossip from actually being ON the red carpet. That’s what fans want to hear the next day. Just talk and be yourself.

Wow, that's harsh. Not that I disagree, but calling Rancic out on not writing her material is cutting her even more down to size than the response to the original ignorant comment did. Shouldn't have expected any less from Kathy Griffin.

Here’s the best I can give you: I will make my Miley Cyrus jokes as long as people want to laugh at them…but there is a chasm of difference between making a joke about Miley Cyrus wearing duct tape over her nipples out in public (which I think is totally fair game) and simply looking at a photo of her on a red carpet and saying she is ugly or a bad singer or pathetic or something like that.

More like this
Sandra Bullock, Girlboss Extraordinaire
By Matt Harkins & Viviana Olen
Spice Girls’ Net Worth: The Richest Member Is Wealthier Than The Rest Combined
By Hugh McIntyre
Teyana Taylor Channeled Aaliyah In Y2K Thong & Leather Pants
By Dominique Norman
Bustle Newsletter: May 17, 2022
By Stephanie Talmadge
Get Even More From Bustle — Sign Up For The Newsletter