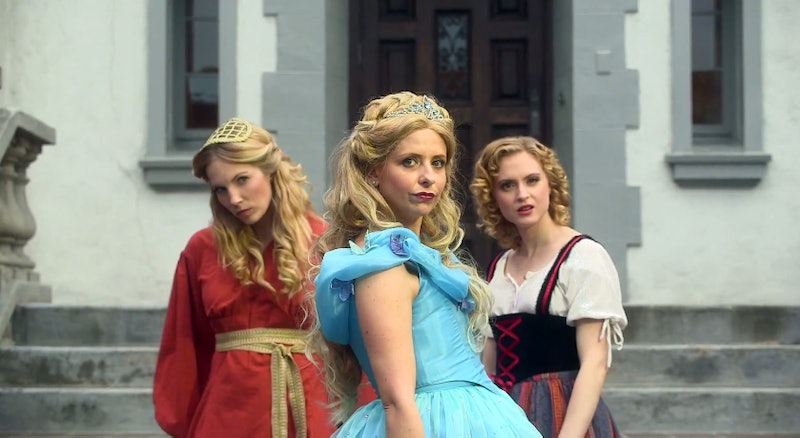 Listen, if you don't think Sarah Michelle Gellar is an icon, you better get out of my face. But if, for some reason, you did not watch Buffy the Vampire Slayer (who are you?!?), you might have watched the newest Disney Princess Rap Battle video and been surprised to see former Buffy the Vampire Slayer star Sarah Michelle Gellar killing it as the rapping Cinderella to Whitney Avalon's Belle.

Well, let me tell you: Yes, she killed it, but that she did so is no surprise. Buffy may have ended over a decade ago, but Gellar is still the badass she always was when it comes to portraying badasses. Sometimes that manifests in literal vampire butt-kicking; sometimes it manifests in raps about which Disney princess is better.

Avalon very much holds her own here as Belle — even dominates — but I have to admit I saw the words "Sarah Michelle Gellar Cinderella Rap" and my attention was stolen. We've seen her sing before (Buffy has a whole musical episode), but we've never seen her rap, and we've never seen her as a Disney Princess. Until now. May this signal a long future of Gellar starring in sketch videos as various characters, and BAMFing up musical features. She's already got a history of it, after all:

Her most recent badassery

Did I mention it's flawless?

And Some Past Badassery, Literally Slaying Demons While Singing

This is probably one of the most legendary Buffy episodes — take note.

This is a Burger King commercial approximately a zillion years ago

Oft-forgotten, but such a classic.

And this is not her singing, but it is a musical ode to her badassery, so we're counting it

It shouldn't be overlooked.