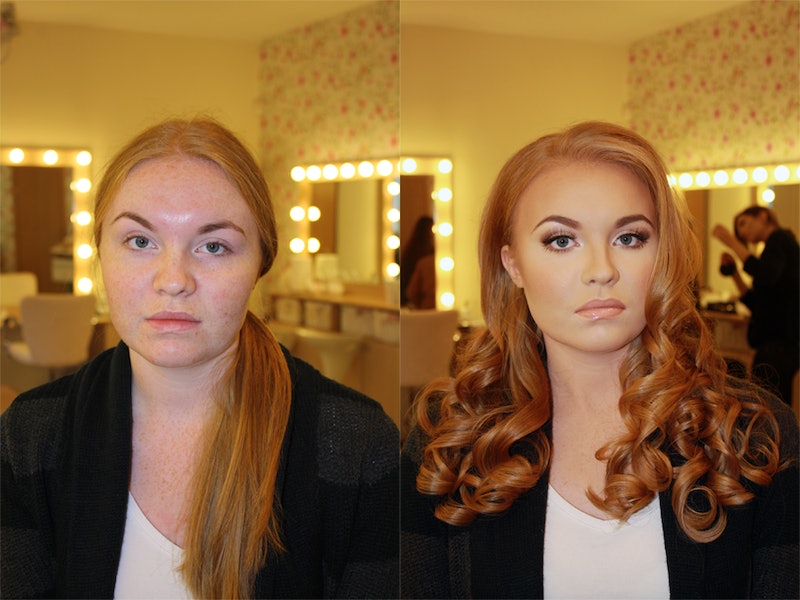 This is a photo on Reddit that's collected more than 4,000 comments, many of them about female beauty. In the "before" shot, the model looks average; her skin is uneven, a little shiny. In the "after" shot, she's become completely different person: her pout is now glossy, sultry. Her hair is curled into ringlets. Her eyes are shaded and enhanced. Her eyebrows are shaped and filled. And her face is dramatically contoured to make her nose thinner, her jawline sharper, and her cheekbones higher; the difference is so great, in fact, that some commenters cried Photoshop.

Again and again, commenters marveled, "She doesn't look like the same person." And a statement like that — when we're talking about beauty — has weirdly moral implications. For instance, one male commenter insisted that if men engaged in the same sort of transformation, it would be seen as deceitful:

If a guy wore prosthetic muscles under a long-sleeve shirt (à la Superman costumes), you would likely feel as if you had been deceived, regardless of what you thought of the person.

Deceitful? Depends on what this type of makeup is trying to accomplish. There is obviously no innate obligation to present one's "real" face to society. Sequined eyelids? Oxblood lips? Go wild. Makeup has developed into a form of increasingly personal expression. Blue nail polish. Blue lipstick? Get it, you crazy thing.

But historically — Cleopatra, Jezebel, and beyond — makeup has been (and still is) a means of making yourself more attractive to those with whom you're trying to procreate, if you wanna get biological. With makeup, a woman can mimic the signifiers of fertility (flushed cheeks, full lips) and all sorts of other alluring little traits, like sleepy-sexy eyes, a narrow nose, and whatever else society considers beautiful. Makeup is the thinnest and most common of the masks we wear; it is not a part of us, and it's important to remember that, but it serves us quite well when it comes to getting what — whom — we want.

If you're wearing makeup to attract others, either platonically or sexually, it's not just done for your own personal pleasure anymore; makeup is now a signal you're using to draw people in. Deceitful? Maybe, but the real question is this: Do people have an obligation to present themselves authentically to those they're trying to attract?

I took to Facebook, the land of the people, to find answers. Reddit's crazy; my friends are a little more down-to-earth. Maybe. I posted the photo and asked for reactions:

We can say she looks "fake," but I mean, all style is purposely artificial — clothes are "fake" in the sense that they make us look different than we naturally look, too.

I have unfortunately acquired an unhealthy distrust for people's faces [due to makeovers like this].

There may be a point at which "fakeness" becomes detrimental to the moral makeup (no pun intended) of the individual and hence the well-being of those around him/her. Psychological research has shown that people sporting fake brand goods tend to lie more and do other more dishonest things.

I think it is a LITTLE disturbing how much time we are willing to devote to looking pretty, with no other intention.

She seems prettier but not more attractive. This may be particular to my own perception, but I find women in heavy makeup to be kind of repellent--because that signals to me that this is a woman who seeks to fit into a system I personally find stifling, who feels compelled to devote a lot of time and energy into drawing sexual attention, or who does not love herself and seeks to hide.

PS: I'd be remiss not to include my boyfriend's reaction, which was that the makeup job in the photo was the equivalent to "Barry Bonds taking steroids."

If you're simply trying to attract a temporary partner — whether because you're Anne Boleyn and you desperately need to bear the king a male heir, or because you're just looking for a one-night stand — then there are massive benefits to be had from faking it, so to speak, with makeup. Make like Marilyn and use the power of shading to grant you a wide forehead, high cheekbones, and a narrow chin — at least for the night. It'll help you lure in your bait, and who cares what they think in the morning? You got what you came for.

But if you're looking for something more substantial, whether that be a relationship or just human interaction based on mutual honesty, then maybe there can be too much makeup. The person you're interacting with is getting, for all intents and purposes, a Photoshopped version of yourself, and you are now operating under a mask... literally. (I mean, if you're the type of person who can totally divorce your sense of personal identity from your surface-level looks, then you are an amazing creature, but I have yet to meet someone who functions that way.) With a makeover like this one, you've set yourself up on a pedestal that you now must constantly scramble to stay on top of.

But hold up: Is this longing for a "real self" just a passé construct that we'll soon be evolving past? Maybe humans are moving into a stage where artifice is more and more the norm (how many sci-fi texts have you read where humans have perfect robot bodies, or only communicate through computer-like machines, or use other inventions that eliminate the need for interacting with our real, imperfect bodies?). That's certainly a possibility, and maybe it's naive to protest against it. After all, if we can look like a better, less pixilated, more perfect version of ourselves... why shouldn't we? And who cares if it's fake?

It all comes down to how much respect you have for the genuine. If you like to know what's real — like the shape of someone's nose sans highlighter — then you'll see this Reddit photo as, yeah, a form of deception. If you embrace artifice and see no reason to cling to the genuine, you'll appreciate the Reddit photo as a savvy way to get ahead in society. And if you just really, really enjoy putting on makeup, because you enjoy the craft of contouring and you feel great when you do it, then cake on that foundation without shame, and perfect those barrel curls.

What do you think of this photo? Misleading...or clever? Tweet me!

More like this
The 13 Best Cream Makeup Palettes, According To Experts
By Audrey Noble
42 Black Owned Fashion & Beauty Brands To Support Today & Always
By Mekita Rivas, Shea Simmons, Kui Mwai and Dominique Norman
Pamela Anderson's Most Iconic Makeup & Hairstyle Moments
By Olivia Rose Rushing
23 Romantic Makeup Ideas For Valentine's Day 2023
By Olivia Rose Rushing
Get Even More From Bustle — Sign Up For The Newsletter
From hair trends to relationship advice, our daily newsletter has everything you need to sound like a person who’s on TikTok, even if you aren’t.