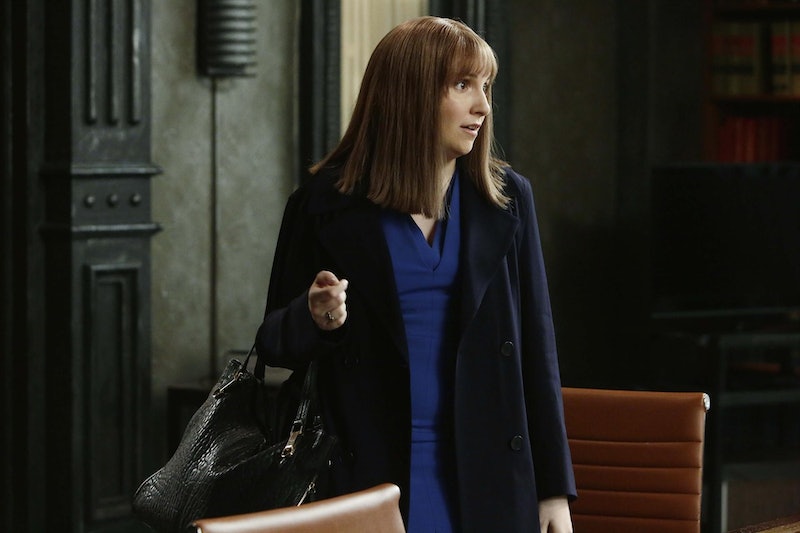 Lena Dunham and Shonda Rhimes have a lot in common: They’re both wildly successful (and fairly controversial) writers and producers. From Girls to Scandal, both Dunham and Rhimes seem to have their respective fingers on the pulse of what Americans (and especially American women) want to watch. Last year, Dunham told Grantland that her biggest dream in life was to be a guest star on an episode of Scandal , and in the March 12 episode, she’s getting her wish: Dunham, clad in an awful wig, will play “Kinky Sue,” a whistleblower threatening to expose even more of Washington D.C.’s numerous (and I mean numerous) secrets. But how did the Girls creator nab the role? Is Lena Dunham friends with Shonda Rhimes?

Rhimes and Dunham seem to work well together, so it seems like they could be, right? Imagine a Dunham/Rhimes slumber party: They could trade writing notes, with Dunham injecting a little more absurd Grey’s Anatomy drama into the world of Girls (Does Shosh get into a plane crash? Will Marnie suffer a near-drowning?). Rhimes could add an always-naked boyfriend character to Scandal as an homage to Adam Driver’s shirtlessness (come to think of it, Jake Ballard never has clothes on. Well played, Shonda). Maybe they would prank call Chuck Lorre (the creator of the thankfully now-extinct Two And A Half Man). It would be a ton of fun!

But before I get too carried away, let’s check out the facts and see how far this Rhimes/Dunham friendship tale really goes...

As far as their social media is concerned, these ladies are both avid tweeters — and Dunham loves her Instagram (I follow her for the cute pictures of her and boyfriend Jack Antonoff’s dog, Lamby). Though there don’t look to be any conversational tweets back-and-forth (like between Dunham and her bestie Taylor Swift), there is some support. When Dunham spoke about to the reactions of her being sexually assaulted in her book, Not That Kind Of Girl, Rhimes was in her corner. She also supported Dunham’s support of Tom Meagher, a man who created a dialog about sexual assault and violence against women after his wife was abducted, raped, and murdered.

When New York Times TV critic Alessandra Stanley called Rhimes an “angry black woman,” among other things, in a profile about How To Get Away With Murder, many Hollywood stars jumped to Rhimes’ defense, including Dunham. Suffice it to say that she was not happy with the profile.

Dunham has also waxed poetic about Rhimes and her obsession with Rhimes’ work in the press. In one of her monthly columns for Glamour, Dunham wrote about the women who most inspire her. Rhimes was, of course, on the list. Dunham noted:

Shonda has taken over a full freaking day of the week with her addictive programming. She's done it unapologetically. And Scandal has made wine and popcorn seem like a viable, even healthful, meal.

Dunham has one chink in her armor when it comes to her relationship (at least the one we see in the press) with Rhimes. In a 2012 CNN interview on the issue of racial diversity on television, Rhimes (the queen of colorblind casting on TV) spoke out about Dunham’s assertion that because she did not grow up with black friends she did not cast black actors on Girls as they were not a part of her experience. Rhimes said:

The idea that she felt her experience wasn’t relatable to anybody who wasn’t white is disturbing to me. Because I watch the show- I find it delightful. So why couldn’t one of those girls been Native American or Indian or Asian or Hispanic or black and it had been exactly the same story? I don’t understand why it would have to be a different story because the person was a different color.

Shots fired! I’m sure that Dunham has revised her ideas about race on TV and she and Rhimes are now friends. Even best pals fight sometimes. Just one more question, though: Lena, Shonda, may I please come to your next sleepover?