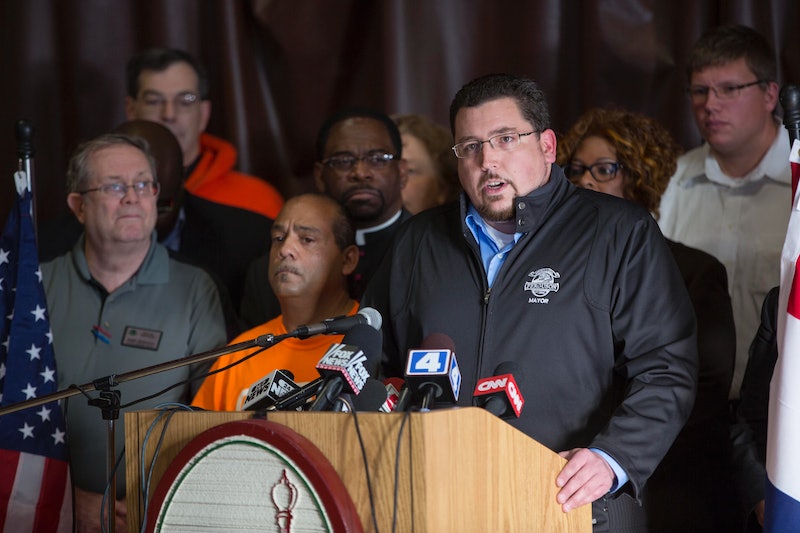 It's official: Ferguson Police Chief Thomas Jackson has resigned from his post and will be leaving his current position on March 19. In a brief press conference held Wednesday evening, Ferguson Mayor James Knowles held a press conference where he addressed media and answered questions regarding Jackson's resignation and what it means for the city. In a rather brief resignation letter, Jackson gave his notice and reiterated his commitment to the city even after he's hung up his badge:

It is with profound sadness that I am announcing I am stepping down from my position as chief of police for the city of Ferguson Missouri. My resignation will be effective March 19, 2015 to provide for an orderly transition of command. It has been an honor and a privilege to serve this great city and to serve with all you. I will continue to assist the city in anyway [sic] I can in my capacity as private citizen.

Though this week's press conference did have Knowles answer questions from media, unlike last week's response to the Department of Justice report, his statements were just as brief. The city will soon be "focused on engaging other professionals to help on a temporary basis," according to Knowles — not just in regards to the police department but for the city as a whole as a means to address the report. Throughout Knowles' comments during the press conference, there were a few takeaways that stuck out.

Jackson Will Receive A Large Severance

According to Knowles, Jackson will receive a year's severance including salary and healthcare benefits as is standard protocol for officials in comparable positions. Jackson's yearly salary totals nearly $100,000. City manager John Shaw, who also resigned this week, will receive a similar severance, echoing Knowles' statement that this is standard procedure.

There Will Be An Acting Police Chief & A Nationwide Search

Jackson's interim replacement will be Alan Eickhoff, currently a Lieutenant Colonel on the force, and the city will be searching nationwide for a permanent replacement for Jackson, whose tenure as Police Chief totals just five years. An interim has yet to be named for Shaw.

One of the questions asked of Knowles during the press conference was what all these resignations meant for the city, seeing as his "city clerk" had also resigned, among other personnel. Knowles corrected the reporter that it was a court clerk and not a city clerk, to which the journalist asking the question said that that's what he meant. It was then that Knowles got combative, hinting at wishing he could clarify his statements in a similar manner, before reiterating why it's important that Jackson didn't resign immediately following the shooting of Michael Brown in August:

We think it's important we have an orderly transition. We can't have everybody just up and leave. The city has to function, the police department has to function. We are very committed to making sure all of those function properly so part of that is the chief having a resignation in the future which will allow him to talk to his men.

Knowles was asked if he would also be resigning, which only made him more defensive:

Somebody is going to have to be here to run the show and I've been committed, the city council has been committed to making those reforms. I realize that some people want my my head or the heads of others.