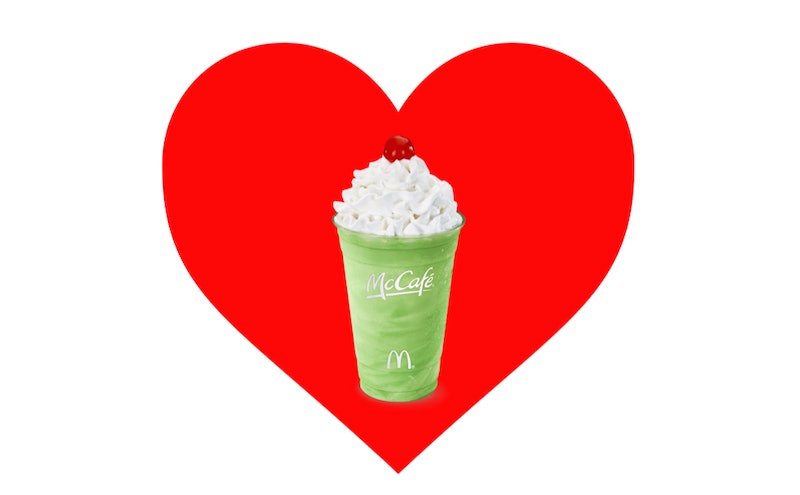 I know it sounds crazy, but I didn't try my first McDonald's Shamrock Shake until my freshman year of college. Back then, a group of us cautious young nerds was looking for an alcohol-free destination before the leader of the pack reminded us that it was, indeed, March. And you know what that means!

I didn't know what that meant, but I learned quick. March was the month that the elusive Shamrock Shake was unveiled. (I blame the fact that I was born into a Burger King family, and was thus unaware of such traditions.)

Here's the thing — back then, the Shamrock Shake was a rarity. Finding a place that had the materials in stock was like finding a needle in a haystack. While it was a McDonald's tradition that began in the '70s, many branches seemed to give up on the idea in the early 2000's. In order to find a location that had the goods, websites emerged to help prevent the wary Shamrock Shake lover from facing an embarrassing situation at the drive-thru. After all, when you have your heart set on a green shake, chocolate is just a poor alternate.

Thankfully, the closest McDonald's to our campus was stocked with the green syrup, or whatever it is. My very first Shamrock Shake tasted more like green-tinted vanilla than the mint we've grown to love today. Also, unlike our shake of today, whipped cream wasn't an option, and the maraschino cherry? Forget it. It might have been plain, but it was an experience — hence, why I remember this somewhat mundane moment 13 years later.

After that, I kind of became obsessed with learning the history behind the Shamrock Shake. Since my hobbies also included creating back-stories for the Burger King Kids Club kids (were Snaps and KidVid dating?), this was only to be expected. I mean, besides writing and seeing what Jaleel White has been up to these days, I primarily use the Internet to look up fast food facts. Doesn't everyone?

For a few good years in the '80s, McDonald's promoted the shake with a lovable green mascot named Uncle O'Grimacey, but eventually, like all good mascots, he was phased out. I then learned that for a while, the Shamrock Shake mix was an optional buy for McDonald's franchises — and often, locations didn't buy enough to last them through March. Thankfully, they've learned from their mistakes.

Shamrock Shakes continue to be the one drink that comes in a McCafe cup that I will never second guess while ordering. In order to remember my beloved shake from this year, here's a selfie I took with it.

I'm sure my 2016 Shamrock Shake selfie picture will pretty much look exactly the same. By 2017, perhaps I'll be like, "why do I do this? Nobody cares but me."

If McDonald's needs a few more reasons to keep the beloved Shamrock Shake on their menu for years to come, in every location imaginable, here are a few more high points regarding this magnificent invention.

When I was a kid, my parents sometimes treated us to milkshakes on special occasions. (Seriously, it was like twice a year — so your flavor choice was kind of a big deal.) Strawberry was always the "I'm feeling ca-razy!" flavor, while vanilla and chocolate were always the safe classics. Mint? It's a whole new world with mint. Not many people have mint, which makes it even more special.

2. It's good to have something to celebrate with that won't give you a hangover

St. Patrick's Day is typically the day where you can drink until you explode, and face little shame among your social group based on what you said and how you acted while pounding those drinks down. It's fun at the time, but terrible towards the end, and the absolute worst the morning after. Shamrock Shakes are a perfect way to be festive without facing any bad consequences, besides a slight ice cream headache.

3. Because Uncle O'Grimacey would have wanted it this way

4. Having something "limited" makes it so much more fun

It's kind of like the McRib — but in this case, we at least have a heads up as to when our shake of choice will be hitting McDonald's restaurants across the country.

5. They seriously get more delicious as you keep drinking them

With many foods, there's rarely a bite that can beat that first bite. With a Shamrock Shake, the last few sips are mint mixed with whipped cream and cherry flavoring (that is, unless, you ate these parts right from the get-go with a spoon. If so, no judgments). That girl in the animated gif above was so shocked by the taste that she grew a hat. I bet by the end of the shake, she was in full-on leprechaun gear. Seriously, drinking a Shamrock Shake makes me thirsty for more Shamrock Shakes.

Which is exactly why I limit myself to one per year.