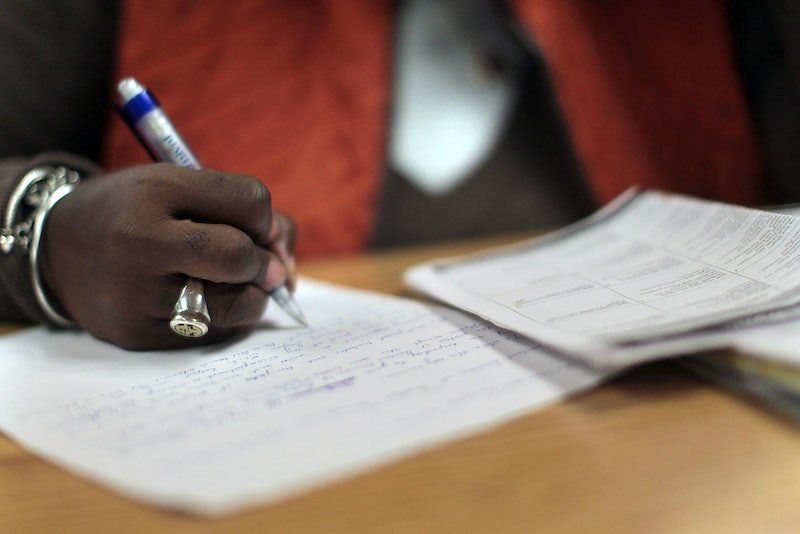 You have probably heard about the #DearMe campaign, which asks female YouTube personalities to give advice to their younger selves in honor of International Women's Day. The best #DearMe advice of all is coming from Akilah Hughes, who is telling her younger self what we all wish we could have. Unlike Hannah Hart, Laci Green, and Michelle Phan, Hughes is taking a more light-hearted approach to the campaign, as she laments over not inventing Facebook before Mark Zuckerberg, for instance.

I couldn't stop laughing at her all too true revelations, because although it sounds nice to tell your younger self how amazing you turned out to be and how your high-school problems don't matter in 10 years... well, let's just say we'd probably all like to time-travel back to 2005 and create all of the hottest trends on the Internet before anyone had even conceptualized the hashtag. I know that if I'd known how popular social media was going to be when I was 10, I would have been all over HTML and Java. All. Over it.

Hughes not only laments over the wealth she lost out on by not learning to code, but also gives herself practical advice she could have used when she graduated from college and was living in the midst of the recession. Here are some of her best tips; scroll down to watch the whole video.

As Hughes is a native of a small town in Kentucky, she advises her younger self to get the hell out of there and into a city where she can learn to code. As she put it, "If you build Facebook, we will be billionaires, and I won't even have to be making this video."

Since 2007 was right before the start of the Great Recession, Hughes points out that it was a bad year for everyone, including her younger self. Since she not-so-conveniently graduated in the midst of the economic downturn, she tells her younger self to not take out so many loans or waste money on clothing, as well as to save as much of her money as she can while she's in school. Despite the supposed promise of job security a college degree provides (yeah, right), she tells herself of the tough time she and all of her friends will have finding jobs after receiving their diplomas. The struggle is real.

YouTube was founded in early 2005, but didn't start gaining major ground until around 2006. Hughes points out the fact that many content creators who started making videos on the website in the early days have gone on to become success stories because of how few video makers there were during that time. Now, 300 hours of video are uploaded to YouTube every minute, since everyone and their mom thinks they have what it takes to make the next viral video. Obviously those who started early had a much greater advantage, and although Hughes started uploading content eight years ago, it wasn't until 2010 that she started making content consistently. As she points out to her 15 year old self, "If you start making videos now (10 years ago), by the time you're my age, you can just rest on your laurels."

If you want to check out more of Hughes's advice to her younger self in her #DearMe contribution, watch the full video below: