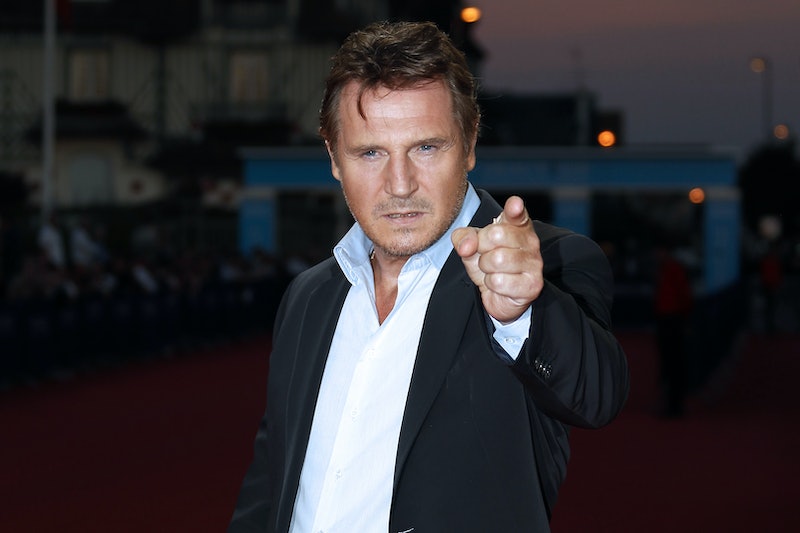 I might not know Liam Neeson personally, but I do know that he's quite popular for having a very particular set of skills — those being punching the bad guys really hard, having great aim, and hunting down felons. Ever since Taken became a worldwide sensation, the 62-year-old Irish actor has become a somewhat unlikely action star. Neeson, whose range as an actor varies from starring in Oscar-heavy dramas like Schindler's List to holiday hits like Love Actually, has apparently found himself in a typecast rut as of late, and it all has to do with the genre of film he totally rules: Action. While promoting his new film Run All Night, Liam Neeson discussed his various action movies, and admitted he may be looking to switch up his career very soon: "Maybe two more years. If God spares me and I’m healthy and stuff...But after that, I’ll stop [the action], I think.”

But — who will save all the world's kidnapped hostages? Who will kick the crap out of thieves while still looking like a comforting father figure? Who will make enemies quiver with one dashing, handsome sneer?! These are confusing times, dear readers.

However, on the bright side, with Neeson leaving the action world behind him in a blaze of explosions and shrapnel, it does mean we get more of him in other genres — and that is something to celebrate.

Here are a few roles I would love to see Neeson take over after he's passed the torch to the next vigilante:

A dreamy romance with Meryl Streep

The live-action remake of The Little Mermaid

Liam Neeson would be THE BEST King Triton. Listen up, Sofia Coppola!

Someone has to give Colin Firth a rest.

A buddy comedy with Helen Mirren

Because they both deserve to have a laugh.

A solo hero's journey, a la Wild and Cast Away

I'd watch Liam Neeson battling the elements on his own for two hours, because IT WOULD BE RIVETING.

More like this
Lisa Marie Presley Reviewed Baz Luhrmann’s ‘Elvis’ Movie On Twitter
By Grace Wehniainen
A 'Bridgerton' Star Just Dropped A Major Hint About Joining The Live-Action Barbie Cast
By Bustle UK
Shocked Fans & Former Co-Stars React To Ray Liotta’s Death At 67
By Grace Wehniainen
'Stranger Things' Star Joe Keery Is Dating An "Indie Scream Queen"
By S. Atkinson and Grace Wehniainen
Get Even More From Bustle — Sign Up For The Newsletter