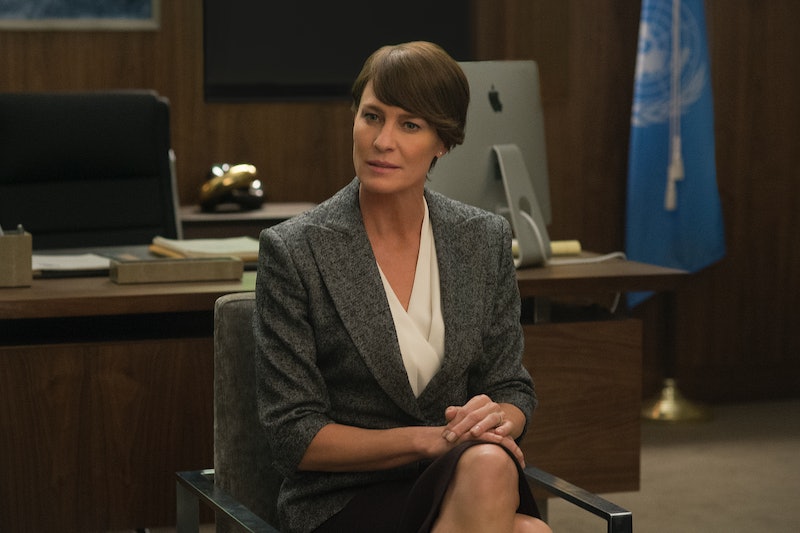 Do you think Claire Underwood has ever asked herself which Sex and the City character she's most like? OK, fine, probably not because she's Claire Underwood but, she's obviously a Carrie. I know what you're thinking — aside from Claire's impeccable style on House of Cards Season 3, the First Lady couldn't be farther from Carrie Bradshaw. Well, apparently, she has the same flair for dramatics and definitely watched the Sex and the City movie one night while she was on that rowing machine. In "Chapter 33," Claire is a brunette, following a huge blow up fight with Frank on Air Force One — and, if you're a SATC fan, that should seem very familiar.

Robin Wright has kept me in a perpetual state of hair-envy with her blonde pixie cut since House of Cards premiered two seasons ago — just like Sarah Jessica Parker's blonde curls almost drove me to get a perm. So, obviously, I noticed Claire's hair color change right away and then couldn't help but notice the very similar circumstances leading up to her decision. Just like Carrie when she went brunette after getting ditched at the altar by Big, Claire went dark following that game-changing fight on Air Force One in "Chapter 32" and, of course, her traumatic experience in Michael Corrigan's jail cell. Basically, Claire is a total Carrie and if you don't believe me, here's all the proof you need:

So we should obviously all be on the look out for killer Manolo Blahniks on the First Lady's feet.