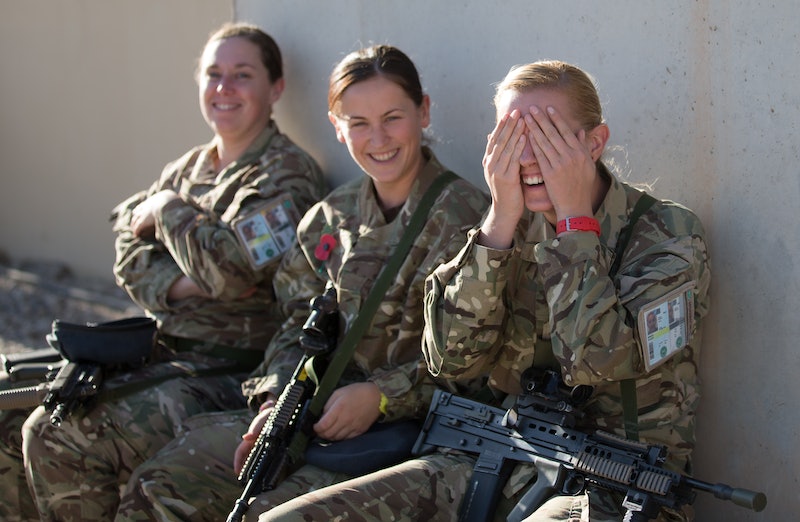 When you think about the advancements women have made over the years, you probably think of women gaining access to the workplace, becoming leaders, and perhaps even performing heroically in the military. Well, if you thought of the latter, you might have to think again, as new research found that men find female war heroes less attractive. The study, published in Evolution and Human Behavior, originally wanted to see how women perceived male war heroes, but found this shocking revelation during their research instead.

Although the study relates the findings back to biology, the question remains: Could this fact be rooted in our misogynistic culture? After all, a 2013 study published in Social Cognition found that men are more attracted women who they perceive to be less powerful. But, the jury is still out on this one, as the debate in the scientific community about whether gender roles are biologically or culturally based continues on. On the cultural side, says Dr. David Witt of the University of Akron, we learn normal behaviors by observation; as such, women could be weaker due to not being allowed to perform the same physically demanding tasks as men throughout history — like fighting in wars, for example.

To further understand the findings, let's take a closer look at the research.

Three separate experiments were conducted by the University of Giessen (Germany), the University of Southampton (United Kingdom), and the University of Amsterdam. The first study was archival (meaning they analyzed data from older studies), focusing on a study done on U.S. soldiers who fought in World War II. For the second experiment, the researchers used a control sample of 449 veterans and 123 living Medal of Honor recipients from World War II and compared their reproductive success. The third experiment used 340 participants, 181 men and 151 women from a Dutch university, who were divided into groups and given one of four short anecdotes of heroism in war to read. The men were given the stories written about women, and the women given the stories written about men — which is where it gets interesting. The participants were then asked how attractive they found the soldier and if they would like to go on a date with them.

In the archival study, the researchers found that World War II heroes produced more children than other World War II veterans, but this could be just a correlation and not prove any given cause. In the second study, they concluded that women are more attracted to soldiers who committed acts of bravery in war, versus those who weren't directly in the line of fire. They also found that women were more attracted to male war heroes versus other types of heroes. Finally, the last study found that while women found war heroes to be attractive, men found women who committed brave acts in war to be less attractive.

The researchers chalk up these findings to evolution. Joost M. Leunissen, a co-author of the research, says that "For women, reproduction is a huge investment ... Women are thus evolved to look for a mate who can provide resources and commitment to help her raise offspring. War heroes can show these signals." They say this can be attributed to sex-selection theory, where men and women look for the traits in one another that are most viable and desirable from a reproductive standpoint. However, there have been numerous researchers and academics who have discredited this theory, saying that it can be attributed to biased scientists and "the prevalent views on gender in the Victorian era." Others have found holes in the theory due to the changes in our social understanding of gender, since sexual selection theory can't explain LGBTQ identitiesor attractions.

It's probably best to take this study with a grain of salt, since the theory the researchers attribute the results to has been highly debated within the scientific community. Also, attraction is complicated. Just because someone would want to go on a date with a soldier doesn't mean they would want to go on a second date with them, once they got to know each other. The premises of this study come from a brave anecdote that is supposed to be representative of a whole person, which is impossible. After all, even assholes can be heroes.

More like this
23 Abortion Funds In States With Trigger Bans To Donate To
By Emma Carey
Starbucks' Summer Menu Includes A New Chocolate Cream Cold Brew
By Emma Garza
How To Fight For Reproductive Rights, Based On How Much Time You Have
By Courtney Young
The Music Industry Continues To Fail Black Women
By Precious Adesina
Get Even More From Bustle — Sign Up For The Newsletter