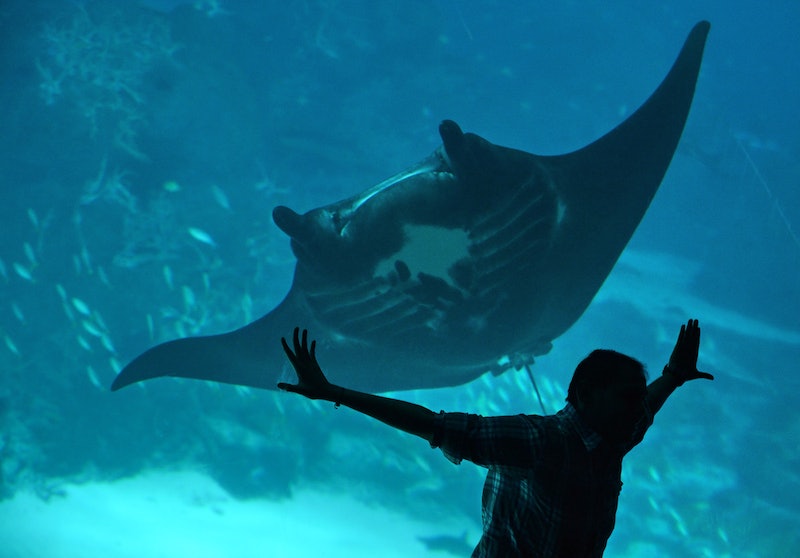 Scientists just caught a seriously big fish — so big, in fact, that it may be one of the largest freshwater fish on record. Recently, in Thailand’s Mae Klong River, a team caught a giant stingray that weighed a whopping 800 pounds and measured 14 feet in length and 7.9 feet in width.

This catch outweighs both the previously largest specimen of this species — which weighed an estimated 693 pounds — and beats the Mekong giant catfish, which the Guinness Book of World Records lists as the “world’s largest freshwater fish.” National Geographic says that this new record-breaking stingray is roughly the same size as a car, and, according to unconfirmed reports, this isn’t even the biggest size this species can grow to. National Geographic says some reports suggest that giant stingrays can grow up to 1,100 to 1,300 pounds.

But this fish finding is important for more than just its record-breaking noteworthiness. The reason that researchers caught this massive fish in the first place is because giant stingrays are listed as a critically endangered species by the International Union for the Conservation of Nature. The Mekong giant catfish — the giant stingrays' biggest rivalry for size — is also endangered. Both fish face pollution, oil spills, dams, and the destruction of their habitats, and the catfish also face overfishing.

Part of the reason that these species’ endangerment has even entered the radar though, is thanks to the work of Nantarika Chansue, a veterinarian and professor at Chulalongkorn University in Bangkok who helped to catch the massive fish, and Zeb Hogan, a National Geographic fellow and a biology professor at the University of Nevada, Reno. The two have been working on this program for over 10 years, and this ray marks the seventh that Hogan and Nantarika caught.

When Chansue catches fish — such as the massive stingray — she tags them and then releases them back into the wild so scientists can study the species’ growth rates and approximate lifespan, both of which are unknown, National Geographic reports. In fact, this particular massive ray had already been caught back in 2009, as part of Hogan and Nantarika’s project.

If you have to see this giant fish to believe its size, don’t worry — the catch was caught on tape and will appear on an episode of Ocean Mysteries, on ABC. With continued research and conservation efforts, as well as the public’s interest, researchers hope that the lives of these big fish will soon be out of danger.