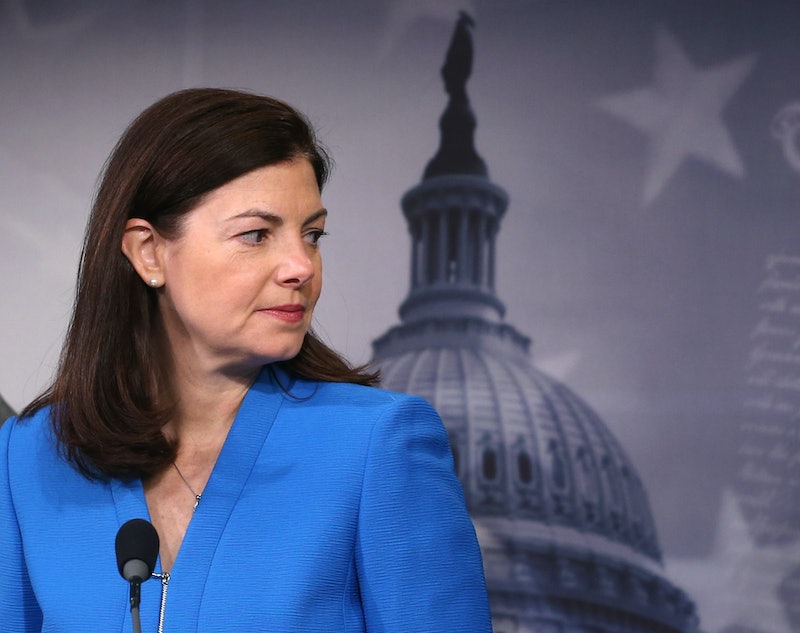 November's midterms are barely over, but Republican women in Congress already have one major player in their fundraising corner for 2016. Billionaire Paul Singer, a big-time Republican donor capable of raising massive funds, will co-host a fundraiser for five Republican women in Congress at the end of March, CNN reports. Now, any event that raises money and awareness for female politicians is great. But the event description sounds a bit... off. Judging by the invitation, I can't help but wonder if the lunch is just designed to increase female representation on Capitol Hill, or if there might be another political angle in mind.

The "Winning Women 2016" luncheon, co-hosted by Singer adviser Annie Dickerson and investor Charles Schwab, will be held for five of 28 Republican Congresswomen — Sens. Kelly Ayotte of New Hampshire and Lisa Murkowski of Alaska, and Reps. Elise Stefanik of New York, Martha McSally of Arizona, and Barbara Comstock of Virginia. According to CNN, the invitation for the event asks donors to contribute up to $5,400 per candidate. It also reads,

In Congress, GOP women comprise only 6 percent of members compared to the Democrats’ 14 percent. We can and must do better. Re-electing these women to office is an important beginning.

Currently, 20 women serve in the Senate and 84 women in the House of Representatives, according to the Center for American Women and Politics. The midterm elections in November actually marked the first time in history that more than 100 women were elected to Congress. The 2014 elections also brought in a lot of other historic firsts. Stefanik, at the age of 30, became the youngest woman ever to be elected to Congress. Mia Love of Utah became the first black Republican woman to be elected into Congress. Joni Ernst, the Iowa junior senator who gave the (widely panned) GOP response to President Obama's State of the Union address in January, was actually the first woman from her state to be put into Congress — ever. Snaps for Joni, bread shoes and all.

There is undoubtedly a huge lack of female representation in Congress. Despite the latest record-setting cohort, women actually take up less than 25 percent of both Houses' 535 spots. The fundraiser invitation, however, doesn't sound as if its goal is to boost these numbers across the board. Instead, the event description focuses on directly pitting Republican and Democratic women against each other as if they're all competing for the same handful of seats.

With the historic midterms behind us, I can't wait to see what will happen in the 2016 elections. But there must be a better way to set new records without getting female candidates to edge each other out.