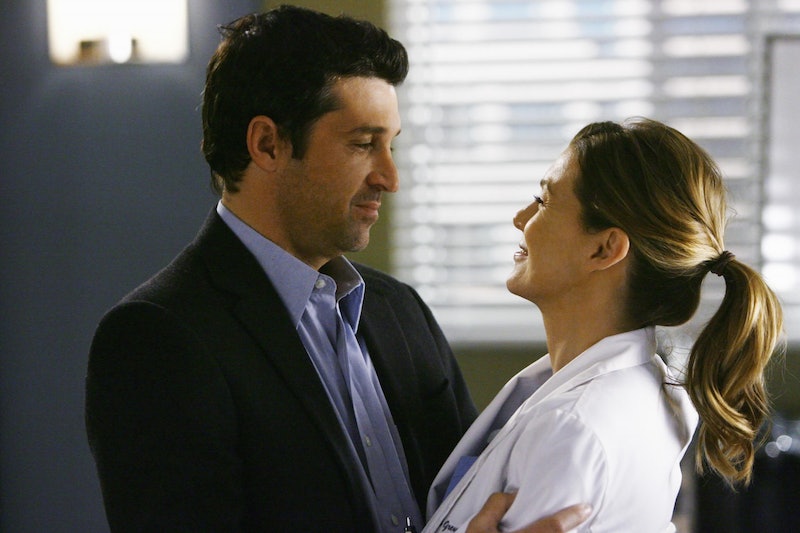 Tonight MerDer took one step forward and two steps back. Just when it looked like Meredith was ready to come around to being with Derek again, Grey's Anatomy had to go and introduce a new scandal. The latest drama makes it look like Derek is cheating on Meredith. Sigh, and things were going so well up until that point.

After an episode that had Meredith questioning whether she still needed Derek in her life, she came to the important realization that she didn't need him—but she did want him. "My world does not and can not revolve around Derek," she told a skeptical Alex Karev. And that's true; Meredith is a kick ass surgeon in her own right. Currently she's on a months-long streak of not losing a single patient. It might have taken Derek moving away for her to remember how awesome she is, but that doesn't mean she doesn't love him.

"I don't need Derek. I don't need him in my house," she said. "I'm doing great. My kids are happy and my career is soaring. But that doesn't mean I don't want to share it with him." And with that Meredith went off to call her husband and share her successes with the man she loved.

Only...a mystery woman picked up the phone instead of him. Meredith kept asking, "Who is this?" but the woman didn't answer, and that allowed everyone to jump to conclusions.

It was a nightmare situation for any MerDer fan. People on Twitter are freaking out and everyone is suspecting the worst of Derek right now.

As much as I'd like to believe the best of Doctor McDreamy, I think Meredith has a right to be worried. As she points out in the promo for next week's episode, Derek has a history of cheating. "He's done this before," Meredith says. "Met a girl, fell in love, started over." She would know, after all. He did it with her.

When things went bad in Derek's first marriage to Addison, he skipped town and shacked up with his intern. Now that things haven't been smooth sailing with Meredith, is Derek doing the same thing in Washington D.C.? I'd really like to hope not. It's been years since his last transgression. He's a father now and so much older and more mature.

But I can't help but think that it's a bad sign that Meredith and Derek have been so out of sync lately. When he's into fixing his marriage, she's not—and vice versa. The pair is just on such different pages right now. I want to believe the best in Derek, but let's put it this way: Meredith has a right to be suspicious, and that makes me (and the rest of the 'shippers) so sad.

Hopefully this is just Shonda Rhimes tricking us. But if it's not, I don't know if Meredith and Derek's marriage can survive this. MerDer might truly be on its way to ending for good.