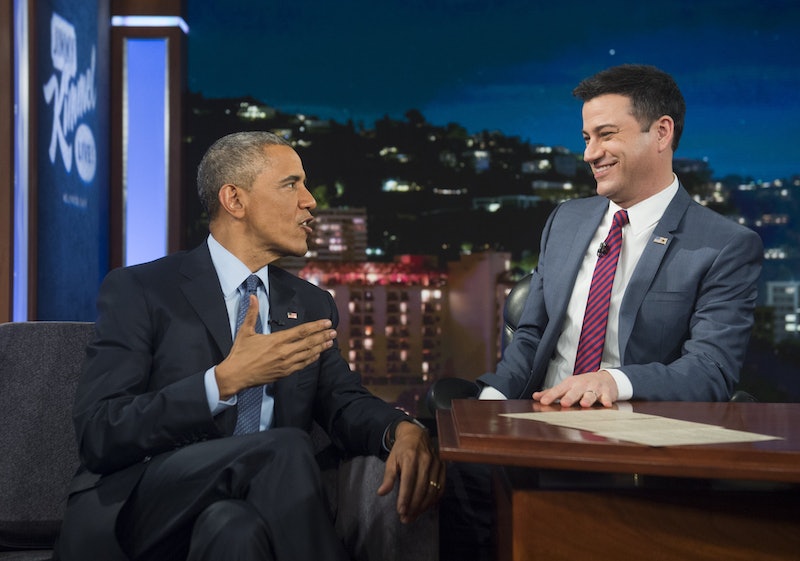 You might not agree with his politics, you may not always like the color of his suit, but if American audiences can unite on anything, it should be that President Obama is a very funny man. If his unparalleled performance with Zach Galifianakis wasn't enough to convince you of his comedic chops, then Obama's appearance on Jimmy Kimmel Live Thursday evening should be proof enough that the president may have a future in stand-up after he leaves the White House. Obama's highly anticipated second appearance on the late night show did not disappoint, and the president had a number of excellent one-liners that even gave the host a run for his money. Here are just a few of Obama's best quotes, mostly funny, but some profound, from Thursday's appearance.

"I think that's a great idea."

On the mean tweets in general

"Those weren't that mean...You should see what Senate says about me."

On the awkward height difference between Kimmel and Obama's seating arrangement

"Generally I have some other stuff to do."

On whether he has Hillary Clinton's email address

On racism and Ferguson

"[Discrimination] is not unique but it is also not the norm. We shouldn't be complacent about the very real existence of problems but we shouldn't despair and think nothing has changed. These are problems we can solve."

"It was unlikely that I was going to be president."

"That's why you will not be president."

"I wouldn't wake someone up to have a sandwich."

On his "dubious" citizenship

"In Kenya, we drive on the other side of the street."

"We give away our power all the time. and everyone's so frustrated with Washington, including yours truly. But the point is, the reason Washington does not work is that two-thirds of us who should be active aren't active."

On being a boss

"Hang around me, you’ll learn something."

Never go away, Mr. President. Or at the very least, take over for one of these hosts when they do.

More like this
What Is Barack Obama’s Net Worth? He Makes *Way* More Now As An Ex-President
By Hugh McIntyre
Yes, Billboard Queen Angelyne Really Ran For Governor Of California
By Brad Witter
10 Times Diana & Meghan Spoke Similarly On The Royal Family
By Sophie McEvoy
Photos Of Boris Johnson Drinking At A Downing Street Lockdown Party Have Surfaced
By Bustle UK
Get Even More From Bustle — Sign Up For The Newsletter