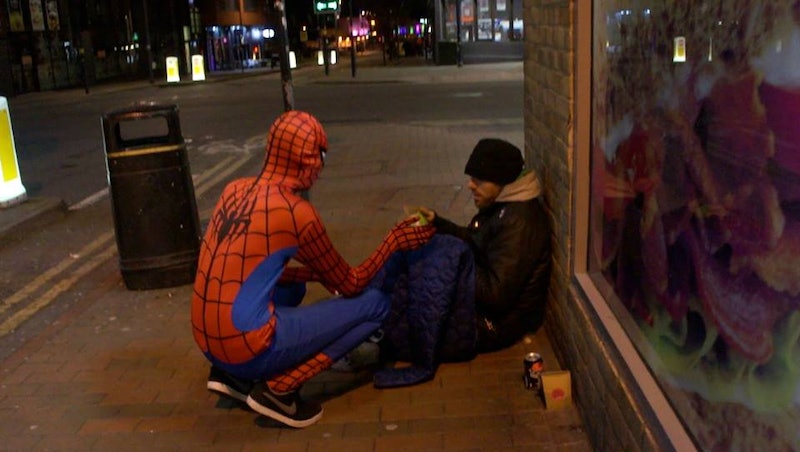 I have known in my decidedly un-radioactive heart for many years that Spider-Man is without a doubt the best super hero of them all. FIGHT ME, naysayers, I dare you. Now that this anonymous Spider-Man in the UK is delivering food to homeless people at night, I just have a million and one reasons why he pretty much kicks every other hero's ass. That's right, the hero to end all heroes is web-slinging all up and down Birmingham, in full glorious spandex costume, feeding the homeless and vulnerable in the area.

Unlike the real Spider-Man, though, we have no idea of this guy's secret identity. The most he will divulge is that he is 20 years old and a bartender, although he wishes to stay anonymous. For the past few months he has been buying sandwiches with his own money, suiting up and heading out into Birmingham to distribute them to people in need.

"I've learned that everyone is the same, we're all part of the human experience and I...believe that we need to look at everyone as humans and help each other the same as we would a close friend," he said in a statement to Huffington Post.

So why the Spider-Man costume? Aside from the fact that nobody should ever have to explain why they are wearing Spider-Man costume, he says that wearing it has been imperative to drawing more people's attention toward the persistent problem of homelessness in Birmingham.

"Before when I was handing out food, no one would take a second look. But when they see Spider-Man handing out the food, they come over and ask what I'm doing and are really interested. Most importantly [they] become inspired to get involved themselves."

Beyond helping out on the streets where people need it most, our masked hero has gone on radio talk shows to promote his cause to share his inspiring message, and is active on a Facebook and Twitter page committed to the cause.

Recently the team from I Am Birmingham followed him around on one of his night strolls. I know some people were mad when they cast a British guy in our recent Spider-Man reboot, but this is pretty much all the evidence we need that the real Spider-Man was secretly British all along.

Now that Spider-Gwen is officially a thing, please consider this my official volunteer bid to move out to the UK and join the team.