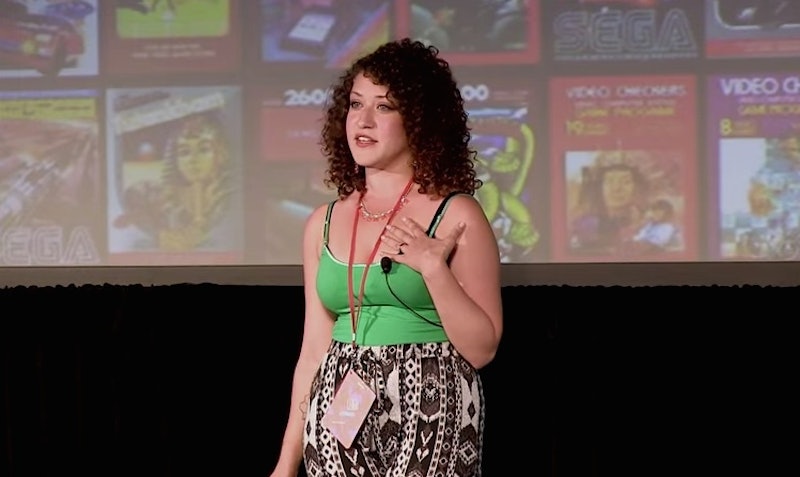 If you're anything like me — a left-wing, video game loving child of the '90s — then you've probably had this familiar, dismal experience. Namely, noticing the regressive attitudes and tropes that hang over much of your beloved hobby. Whether it's pervasive sexism in video game plots and characterization, or racism and cultural appropriation, it's nice to be able to talk games with people who love them enough to be keenly critical, too. Well, here's a place to check out: Leigh Alexander's new gaming website Offworld figures to provide a distinctly unique perspective.

To be clear, Alexander isn't the sole force behind the site, which went live in collaboration with BoingBoing last week. She'll be the site's editor-in-chief, a role she held at Gamasutra until earlier this month. She's joined by senior editor Laura Hudson (of BoingBoing and Wired), and already features contributions from Xeni Jardin and Katherine Cross.

As Polygon detailed prior to the site's launch, Alexander's vision for Offworld is both excitingly specific and refreshingly unapologetic — a space for women and minority gamers to speak. It's a very exciting prospect, especially considering how some within mainstream gaming culture have recently tried to shut such conversations down.

Offworld is a place for curious and playful grown-ups ... there will be an unequivocal and uncompromising home for women and minorities, whose voices will comprise most of the work published here. We're looking forward to loving games again.

Now, something that's unavoidable. You're probably aware that there's a major fracas going on within gaming, complete with a name that criminally oversells its merit: "GamerGate." Alexander, like many women who write about, develop, or criticize games, has drawn a ton of harassment and vitriol from this alleged movement about... is it still "journalistic ethics?" The red herrings are getting kinda hard to keep straight.

In any case, it's an abysmal state of affairs for many professional women who deserve light-years better. But it's also important not to let GamerGate become the whole story about them and their careers, because how damn awful is that? To be the target of throngs of angry, thin-skinned harassers, and to have people constantly think of that the second they hear your name? Alexander stressed this very idea when announcing Offworld at the 2015 Game Developer's Conference in San Francisco, as reported by Re/Code's Eric Johnson.

We are not primarily victims of an unreasonable circumstance for men to thank and to be sorry for. I’d like to ask folks to think about our work, ideas and our goals, and not the things that have been visited upon us.

While I can only speak for myself, I'm extremely excited to see what Offworld produces. Suffice to say, a space geared towards women and minority voices in gaming is a place who's time has come.